‘Ibu tinggal’ in need of aid just like single mothers

THE term “single mother”, better known as ibu tunggal in Malaysian society, commonly refers to women who are either divorced or widowed.

For these women, the government provides various financial aid to help them earn a livelihood and take care of their children.

However, among single mothers is a group of women who have yet to legally divorce their husbands who left the marriage and abandoned the family.

These women are deprived of any government aid available to single mothers.

Referring to them as ibu tinggal, Lim said although the women had been separated from their husbands for a long time, they were still legally married.

In most cases, she explained, they could not locate their husband to fulfil the divorce process.

Many of these men do not share the parenting role and leave it to the wife to fend for the family.

In some cases, women who have escaped abuse choose not to communicate with their partner.

“The pressing needs of these abandoned mothers came to our attention during the movement control order (MCO) period.

“My office was distributing aid such as diapers, milk powder and provisions to single mothers.

“We found that some of these women were still legally married and their husbands could not be located, ” she said, adding that it was difficult to help them get government aid as single mothers were required to produce divorce documents as proof.

“The issue needs to be looked into as these families are in dire need of help, especially for their children’s welfare, ” Lim told the Selangor state assembly.

Petaling Jaya MCA vice-chairman Kelvin Chong said it was true that many mothers were trapped in this grey area.

“We are aware of this situation.

“However, there is nothing much that can be done for them without proper divorce documentation.”

He said in some cases, their partners could not be located.

”Some women don’t want to look for their spouse for fear of getting into more trouble.

“I think the government can think of a way to help them, ” he added.

“From my personal experience, there were abandoned mothers who applied for numerous government aid even before the MCO period.

“However, they later discovered that their husbands had applied for the same aid and received payment.

“Since most of these aid programmes are based on household income, they do not qualify when one partner has already applied for it, ” said Nurainie.

She said even for abandoned mothers with average income, the divorce process would be costly.

“These are not privileged mothers.

“The couple would have been separated for more than a decade but still legally married because divorce is expensive and time-consuming.

“A single petition divorce is not that simple when the client needs to file for substituted service such as advertising in the newspapers to locate the spouse.

“The mothers tend to give up on the process to focus on providing for the family.

“Some husbands would have left their wives to live with their girlfriend while others may have entered into polygamous marriages, ” she said.

Nurainie added that there was a need for the authorities to properly categorise abandoned mothers and a survey should be carried out to identify the exact number of women in such predicament.

Fighting tooth and nail to single-handedly raise their children 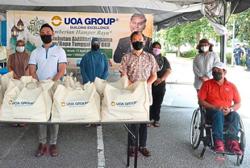