Prathameshwarar with some of the awards he received for his inventions.

JOHOR BARU: The Covid-19 pandemic has not stopped cousins K. Prathameshwarar and Y. Kishen Madev from sharing their new invention, a portable security model, with the rest of the world the virtual way.

Prathameshwarar, 16, and his cousin Kishen, 11, were supposed to showcase their newest invention in Poland in July but the outbreak put a stop to this.

“With global travel restrictions and health concerns, the organisers turned the event into a virtual competition where we present our inventions live through a conference call,” said Prathameshwarar when met at his house here in Masai.

The two won a gold medal for the invention during the competition dubbed the E-nnovate Virtual Innovation Fair, which was held from July 6 to 8 with participants from more than 80 countries.

“The portable security device allows users to send out emergency signals to any phone number assigned to it with just a press of a button.

“The invention can be customised and placed in any item, including a locket or a keychain,” added Prathameshwarar, who is from SMK Kota Puteri 2.

Kishen from SJK (T) Permas Jaya, who was inspired by his cousin, hoped to come out with more inventions in the future.

“I enjoy working on projects with my cousin because I get to learn a lot and have fun as well.

“I hope to come out with more inventions with my cousin soon,” he said.

Apart from the portable security model, Prathameshwarar has won awards and recognition for inventions such as a portable radar for the blind.

This is a pair of gloves that allow its users to sense objects near them from the sound the device produces.

“The portable radar was my first attempt and when I won, I was motivated to come out with more inventions,” he said, adding that he showcased his first invention at Universiti Teknologi Malaysia in 2018.

“My sister shares the same passion for inventions as me and it was a great experience for both of us as we got to meet a lot of people with similar interests,” he said.

Prathameshwarar said he plans to further his studies in mechanical engineering and major in robotics in the future. 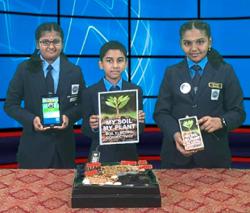