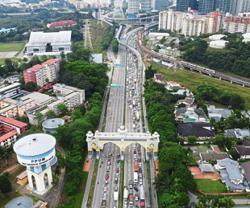 PRASARANA Malaysia Bhd is targeting ridership of more than 39,000 passengers per day for KL Monorail, once all 12 sets of the four-car trains are in service by the end of next year.

“We are in the process of adding seven more sets of four-car trains, with the first to be ready by March 2021 and the last by December next year.

He further said that KL Monorail recorded up to 60,000 passengers per day at its peak.

“We are hoping the number of passengers will increase with the addition of the four-car trains, though there will not be an increase in train fare, ” he added. Tajuddin at the briefing about the installation of components on the new four-car trains at the monorail depot. — ONG SOON HIN/The Star

The monorail’s four-car train is able to carry a maximum of 430 passengers, compared to 214 passengers for a two-car train.

Abdul Hadi was speaking during Prasarana chairman Datuk Seri Tajuddin Abdul Rahman’s visit to familiarise himself with monorail operations, view the installation of components on the new four-car trains at the monorail depot and get updates on the Riveria City transit-oriented development (TOD) project in Brickfields.

“Prasarana is also in the process of installing an automatic gate system to improve passenger safety once the four-car train system is running, ” said Tajuddin.

“Meanwhile, the two-car trains will be gradually phased out and decommissioned by the end of 2021.

“These old trains have been in service since the monorail line started in 2003.”

With the four-car trains, Tajuddin said the frequency of the monorail line would be improved to every five minutes, compared to the present 6.5 minutes. Tajuddin (centre) taking a ride on the KL Monorail.

All 12 sets of the four-car trains, which comprise five refurbished and seven new units, are supplied by Scomi Transit Projects Sdn Bhd under an agreement that was signed in April 2019.

The new trains have to undergo testing, certification and receive approvals from agencies such as the Land Public Transport Agency and Transport Ministry before they can be used.

Riveria City TOD is a joint venture development with Riveria City Sdn Bhd, a wholly owned subsidiary of Titijaya Land Bhd and Prasarana as the landowner.

Its gross development value is RM1.08bil.

The mixed development project sits on a 1.23ha site between the KL Monorail Depot and Tun Sambanthan Monorail Station.

Riviera City is one of 10 property projects by Prasarana to increase its non-fare revenue.