UTC Pulau Pinang office next to the Komtar administrative centre is 96% complete as of May 28. — Photos: LIM BENG TATT/The Star

THE Immigration Department in Beach Street will fully shift its operations to the Urban Transformation Centre (UTC) near Komtar, which is expected to open in July or August this year.

Other federal agencies are slated to operate from the UTC Pulau Pinang office in future as well. Chow (second left) giving details on the federal agencies that would have branch offices at the UTC building.

Chief Minister Chow Kon Yeow said the project was 96.84% complete as of May 28.

“The RM10.38mil federal project was supposed to be completed by March 2, but due to the extension of the movement control order (MCO), it has been delayed until now.

“We hope that the opening of UTC Pulau Pinang will not only hype up the businesses at the commercial lots around Komtar, but also bring economic overflow to the state’s iconic complex.

“We hope this centre could be a catalyst for the commercial space at levels two and three of Komtar. “This is so that the area can be revitalised as a special commercial space and the impact can be used to revive the area around Komtar as well.”

Chow added that they were looking forward to the first application process for passports and MyKad to be issued at the centre by July or August. 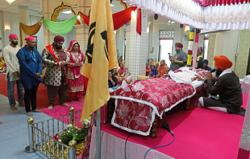