KEEPING to the confines of your home round-the-clock is no easy feat. It is hard for both adults and children.

But staying at home is a must and some people are finding ways to make it more enjoyable.

Father of three Ridzuan Abdul Karim, 43, from Taman Tun Dr Ismail in Kuala Lumpur, decided that it was the best time to execute his dream of having a Star Wars theme mural at home.

“I wanted to make my home an exciting place for my children, so they would not complain about having to be at home all day.

“I am a big Star Wars fan and so are my children, especially my 14-year-old son Umar Yusof.

“In early March, there was a lot of talk about the Covid-19 outbreak affecting different parts of the world and how people were encouraged to stay at home to avoid contracting the virus.

“So, I encouraged my children to stay home as much as they could, even before it was imposed via the movement control order (MCO), ” he said.

“He came back with an image of the Millennium Falcon cockpit, which coincidentally was a one-to-one scale with the 3.96m by 3.66m (13ft x12ft) wall in my son’s room!

“Everything was finalised quickly and he completed it on March 17, just before the MCO kicked in. 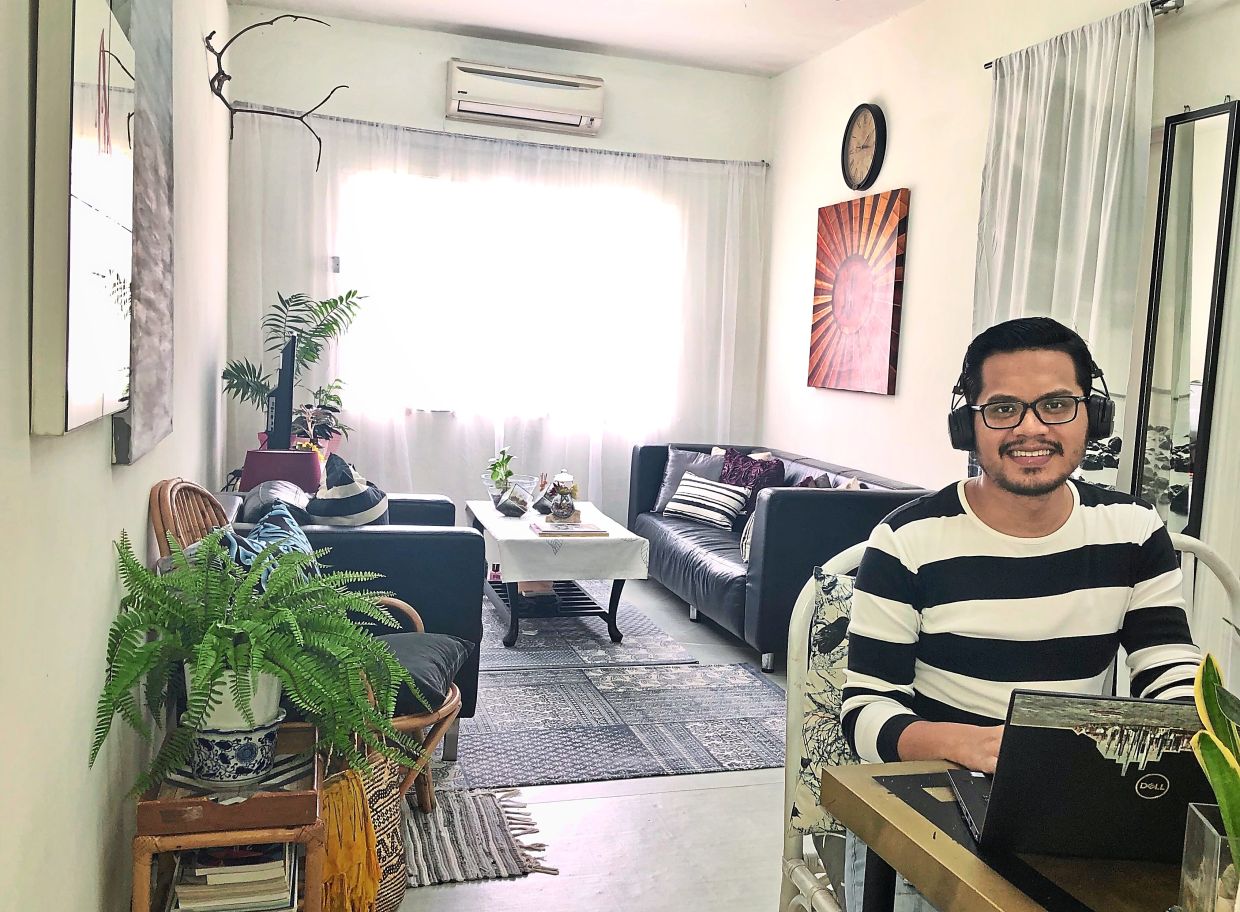 Wafi enjoying his bright living space which now doubles as his workspace.

“It turned out so well, I posted it on social media and it has been viewed over 484,000 times, ” said Ridzuan, adding that it had always been his dream to do something similar since he was a child.

“I am living my dream through my son who loves his room and so does my nine-year-old daughter Hannah Soleha.

“Both of them spend a lot of time in the room now – playing, studying and watching TV.

“They said the room is a cool place so much so that my little one joked about charging anyone who enters the room, ” he said, adding that his project had inspired others to have similar murals in their home.

Another person who made his home more comfortable before the MCO took effect was Mohd Wafi Azimin Mohamed, 35, from Cheras, Kuala Lumpur.

The bank analyst had been working from home since late February as part of his company’s business contingency plan but found that his house was not a conducive place to work.

He was also in self-isolation as he was thought to have been exposed to a Covid-19 positive person.

“My sister and I moved into this house in 2010. Both of us love decorating our home and decided to paint the walls in the living area grey, as it was the trend back then, ” he said.

“It was okay until February, when I was required to work from home. While working at my dining table, it did not take long for me to realise that the environment was too dark and gloomy.

“Despite having the air-conditioning switched on, I felt claustrophobic and could not work well, ” said Wafi, adding that he decided against going to his elderly parents’ house in Rawang as he feared inadvertently exposing them to the virus.

“So my sister and I looked for ideas and inspiration on the internet and decided to change the wall colour to something brighter. We chose a type of white and bought the necessary tools and started painting the same day. It took us about three days to finish it.“The forest-themed canvas painting on the wall which I bought in 2009 from Bali was turning yellow. I saw a suggestion online to repurpose old paintings by flipping the canvas and painting the flip side, ” he said.

Wafi said he could not have planned it better. 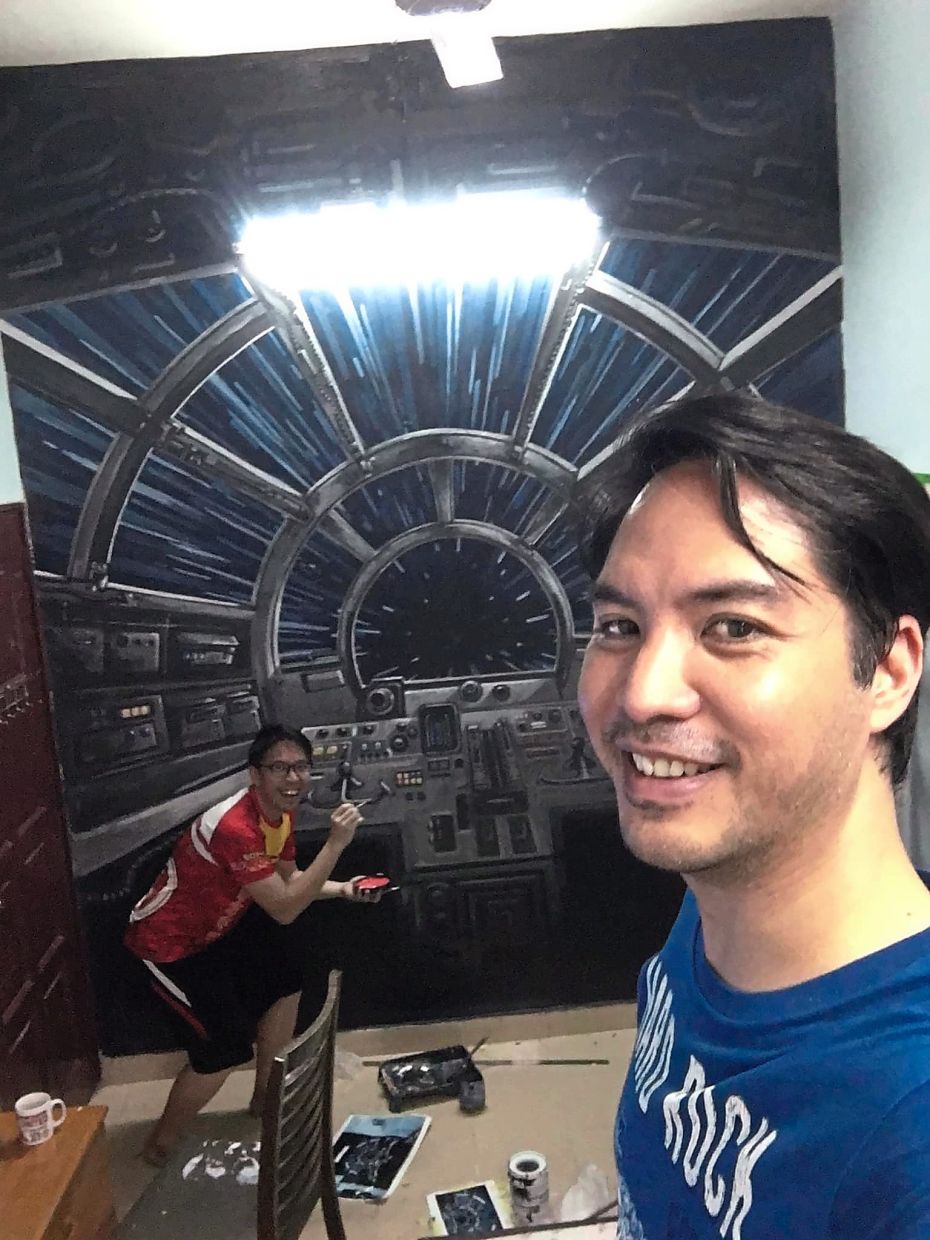 Jon working on the mural before the MCO came into effect as Ridzuan takes a wefie.

“Just as we finished painting our living area, the MCO announcement was made, ” he added.

The siblings completed the room with an old white curtain from their parents that suited the new wall colour.

“The room was much brighter and felt airy. It inspired us to make some changes to the wall hanging too.

“I feel so much more comfortable working from home. I can also confidently make video conference calls without feeling uncomfortable about the background, ” Wafi said, adding that it also inspired him to decorate his home.

“Since the shops were closed, I had to make do with white paint and my watercolours. I used white, grey and blue to create my own painting called ‘Semua Ini Akan Berakhir’.

“Once the order is lifted, I want to buy a display shelf to put my terrarium and mini fish tank, ” he said.

Unlike Ridzuan and Wafi, who had it all planned out beforehand, Muhammad Sholihin Mohamood from Sitiawan, Perak, had to make a furniture run to set up a proper workstation for his wife.

The 31-year-old insurance agent said he and his wife made a dash to the furniture shop a day before the MCO to buy a desk and bookcase.

“Only I had a workstation at home. My wife, who is a teacher at a secondary school, worked from the sofa in the living room. It could get uncomfortable after some time.

“When we heard the announcement of the movement control order, we knew that she would be required to do a lot of work from home.

So, I immediately bought her a desk, ” he said.

The father of one said he put it together on the first day of the MCO and the family was happy with the new arrangement.

“Now we can work side by side in our own personal space.

“My four-year-old daughter also likes to join us at our desks, doing her own thing like colouring, ” he said.

Sholihin added that his workstation now looked neat and easy on the eye.

“My wife loves to read novels and the bookcase that we had was overloaded with her books. So we bought another one to keep her books in order.

“My wife and I spend a lot of time at the workstations now. She is busy conducting classes while I am dealing with my customers online.

“The MCO has made our life difficult but with a little adjustment, our mood to work is lifted and working from home becomes workable, ” he said. 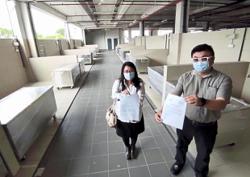 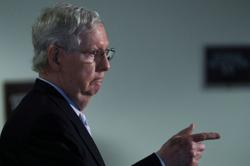 Not in the room where it happens: U.S. Senate's McConnell opts out of coronavirus talks