SMALL and medium enterprises (SMEs) lament the complicated processes of getting support during the movement control order (MCO) period.

An industrial maintenance company manager, who wished to be known only as Paul, said he had problems applying for the wage subsidy scheme via the Social Security Organisation (Socso) online platform on Thursday.

“Many details were required, making the process complicated and confusing.

“As the head of a company with eight staff members, I am lost as we do not have designated departments like those in big companies who are expert in handling the submission to the government.

“I just hope the procedures could be made simpler, ” he said.

Last Monday, Prime Minister Tan Sri Muhyiddin Yassin had said that the wage subsidy programme which was first announced on March 27 would be expanded from RM5.9bil to RM13.8bil.

Under the additional initiative, firms with local employees each earning RM4,000 monthly or less are eligible for wage subsidies.

Companies with fewer than 75 workers will be provided with a subsidy of RM1,200 per month per worker.

While there are no conditions for companies with fewer than 75 workers, companies of the other two categories will have to prove their income has decreased by more than 50% compared to January this year.

According to Paul, his company provides maintenance for machinery in factories, quarries and oil palm industries, and the operation even covers neighbouring states such as Perlis, Kedah and Perak.

“Apart from concerns of being barred from crossing states, we don’t know which category our operation actually falls under, ” he said.

Paul said he would next apply to the International Trade and Industry Ministry’s (Miti) today for permission to resume his business during the MCO.

He said his office in Bandar Perda had been closed since the MCO was enforced.

“Our accounting has to be done in the office and we cannot prepare for the income tax submission, ” he said.

Air-conditioner technician Lee Keng Seng, 46, who has six workers in his company, said he was frustrated with the online system of Socso while doing submission for the wage subsidy.

“Mine is a small business on- the-go.

“My friends told me my company is eligible for the programme and he told me to apply online.

“But being an illiterate on computers, I do not have all the staff details ready on hand.

“I tried to update their Socso details in the online system but it got stuck there. It is frustrating, ” he said.

Lee said although his staff members were not demanding for a full salary during this hard period, he did not want to be left out of the scheme provided by the government.

“We used to repair between four and eight air-conditioners daily.

“We are struggling to survive as our business is based on the repair work on air-conditioners that we carry out each day, ” he said. 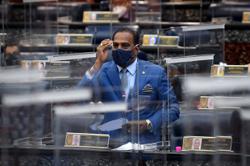