Compliance improving but please ‘speed up the shopping’

PENANGITES who observe the movement control order (MCO) are helping increase the percentage of those adhering the order.

“Upon checking 44,873 premises, MBPP found that 44,460 premises abide by the order and of the 64,140 premises checked by the MBSP, 588 premises have not followed the MCO, ” he said during his spot check visit to Chowrasta market in George Town yesterday.

Jagdeep said complying with the MCO was of utmost importance.

“We have seen that there is a good level of compliance and we are thankful to Penangites for cooperating and increasing the compliance rate as the weeks pass.

“We will not compromise on public and health security.

“Both premises under MBPP and MBSP have been under surveillance and we have put extra attention on local markets where important steps, such as social distancing, crowd control, one point of entry and one point of exit is prioritised.

“We have seen here at Chowrasta market that they are following the social distancing markers placed on the ground.

“When we began in March, we saw the compliance rate at the level of our city councils was at 80% in terms of places such as markets, now I am happy to say that it has increased, ” he said.

Jagdeep said he was grateful to the frontliners at all levels — the medical field, army, the police and MBPP and MBSP workers among others.

“We cannot achieve such a high compliance rate if we do not have the cooperation of Penangites.

“I hope for your continued cooperation.

“We are in a war against the pandemic, not just us but the world, it is important to abide by the MCO, ” he said.

Meanwhile, MBPP mayor Datuk Yew Tung Seang said since the MCO was implemented the challenge was those who took too much time doing their marketing.

“Many who take more than 20 minutes, we urge them to manage their time and shop quickly, ” he said.

While on the mainland, MBSP mayor Datuk Rozali Mohamud said people were getting used to social distancing.

“Only the roadside hawkers are a problem as they keep reopening or open other stalls at the same spot.

“We take away their tables and chairs but this does not seem to deter them.

“We hope they start complying with the MCO, ” he said.

The first phase of the MCO, which began on March 18 as announced by Prime Minister Tan Sri Muhyiddin Yassin, was further extended to April 14. 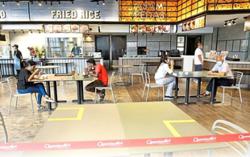