JOHOR BARU: Taxi drivers plying the Johor Baru-Singapore route hope the movement control order (MCO) will not be extended past the March 31 deadline.

Driver K. Robert, 68, said he was complying with the government’s directive, which is part of a nationwide effort to control Covid-19 from spreading.

“For the next two weeks I will be spending more time with my family,’’ he said when met at Larkin Sentral Terminal in Jalan Garuda here.

Robert said he drove to Singapore at noon on Wednesday and reached Ban San Street Terminal at around 3.15pm to send passengers to the republic. He said the return journey from Singapore via the Johor Baru Causeway took about four hours, from 8pm to almost midnight, when the ban on movement in and out of the country took effect.

“We hope the authorities will soon have some good news for us, namely opening the border between Johor Baru and

Another driver Rosli Yusof, 62, hoped the JB-Singapore Taxi Association could negotiate with banks to reschedule loan repayments for their taxis.

He said taxi drivers had to abide by the restricted movement order even though they did not have any source of income apart from ferrying passengers between Johor Baru and the island republic.

“Unlike our counterparts in Singapore who are permitted by the Land Transport Authority (LTA) to pick up passengers in other parts of the island, we are only allowed to pick up and drop off passengers from Larkin Sentral Terminal and Ban San Street Terminal.

Rosli said he still had to pay the RM850 monthly car instalment for his taxi, adding the MCO was a “testing time” for many drivers.

He lamented that the drivers were already facing a hard time making ends meet before the order came into effect as they had to compete with private vehicles offering illegal cross border taxi services between Johor and Singapore. Robert says he will spend more time with his family.

He said before the outbreak of Covid-19, cleaners would clean the terminal building twice daily, but now they were cleaning the place four times a day.

“The whole place will be thoroughly cleaned and disinfected after 1am daily,’’ said Mohd Helmi.

Two auxiliary policemen were stationed at the entrance of each of the three boarding gates to take the temperature of commuters boarding the buses.

He said 200 stalls selling essential goods at the adjacent Larkin public market would remain open until the end of the month.

Forty-four traders operating sundry shops, food outlets, confectionery shops and mobile phone outlets have a choice of either temporarily shutting down or opening for business as usual.

“But food operators are only allowed to offer takeaway and not allow customers to dine in,’’ he said. 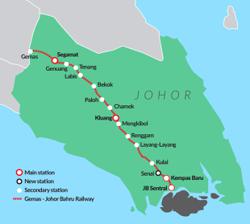