PONTIAN: The Pontian district in Johor houses one of the most important mangrove ecosystems in the world.

Located at the southern-most point of the peninsula and the most southern tip of mainland Asia, Tanjung Piai National Park, about 70km from Johor Baru, attracts a steady number of both local and foreign visitors.

In 2003, Tanjung Piai National Park, spanning 325ha, was recognised by the Ramsar Convention as a Ramsar Site or Wetlands of International Importance.

“It is a great place for visitors to learn and observe the rich biodiversity of mangrove forests,” said park guide Abd Hannan Abd Hafiz, 23.

The Universiti Malaysia Terengganu student, who is on a six-month internship with the park, said the place attracted more visitors on weekends and public holidays.

He said Tanjung Piai had 22 mangrove tree species such as bakau minyak and bakau kurap and was also an important habitat for at least 49 indigenous and migratory birds.

“Singaporeans, South Koreans and Japanese are the main foreign visitors to our park,” said Abd Hannan.

Rika Motomura took the opportunity to visit the park during her summer holiday in Johor.

The 19-year-old student from Shibaura Institute of Technology in Japan, came with 46 others for a two-week English summer class in Johor Baru.

“The southern tip of mainland Asia is so windy and I am happy to be able to explore the place,” said Motomura.

Students from SMK Tunku Besar Burhanuddin, Kuala Pilah, Negri Sembilan, Muhamad Afiq Azizul and Muhammad Fikri Abdullah, both 15, said they were unaware of the importance of mangrove conservation before this.

“The field trip has increased our awareness on the need to protect nature,” said Afiq, adding that they and 34 students from the school also helped to collect plastic bottles washed up along the mangrove coastal forest.

The nearest town to Tanjung Piai is Kukup, which is located about 12.2km away.

Although locals are lamenting that the number of visitors has dwindled over the last few years, most recently in light of the Covid-19 outbreak, Kukup is still a unique place to visit.

“The place used to be crowded with locals and Singaporeans during the long Chinese New Year holidays, but it was very quiet during the celebration this year,” said Tan Leong.

The 64-year-old from Kampung Air Masin, who runs a shop selling clothes from Indonesia and Thailand, said people were also being more careful with their spending.

Another villager, Chan Lee Soon, 66, said the reopening of the Kukup International Ferry Terminal last November after being closed for two months had not had as much of an impact as people had hoped.

“Even those travelling by ferry to and from nearby Indonesian islands are not spending here,” he said.

Visitors to the town have the option of going to Pulau Karimun and Tanjung Balai in Indonesia, which is about 60 to 90 minutes away by ferry.

Chan said many guests had cancelled their booking for the chalet homestay in Air Masin village.

The homestay usually gets busy during weekends and school holidays.

Visitors are drawn to the houses on stilts and the handful of stalls selling dried seafood products.

Some people also buy fresh fish from fishermen there.

“Except for the sounds of firecrackers, only villagers who work in Singapore and other states who came back home made the place lively,” said the fruit stall operator.

Nasi campur trader Said Abu Bakar, 52, who operates near the Kukup Immigration Complex, said there were a few attractions in Kukup but visitors to Tanjung Piai National Park rarely stopped at the town.

He hoped the Johor government would speed up the construction of the new bridge linking Pontian with the Port of Tanjung Pelepas (PTP) as it would boost the local economy and attract more visitors to Kukup.

The 3km bridge linking PTP to Kampung Sungai Boh across Sungai Pulai is expected to be completed by October 2020.

“Tanjung Piai National Park is well-known among local and foreign visitors, so the state government should start promoting Kukup as the seafood town of Johor,” he said.

A trip to the town’s fisherman’s jetty is all one needs to get a sense of its rich fishing heritage and gain entry into one of the many fish farms in the area breeding pomfret, jenahak (golden snapper), senangin (threadfin fish), garoupa and seabass, among others. 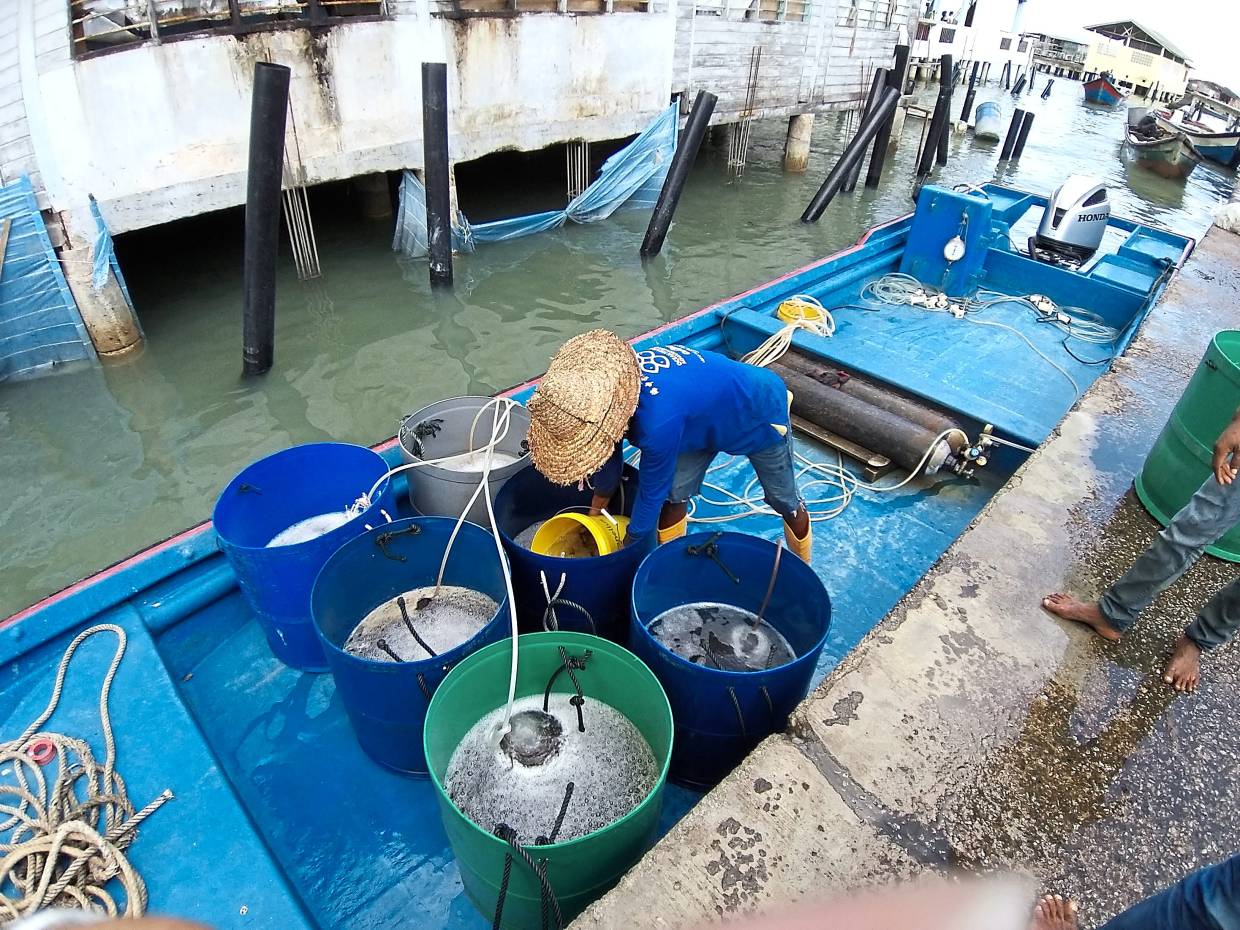 Some of the chalets at Kampung Air Masin in Kukup.

The stone structure at the entrance of Tanjung Piai National Park is a popular spot for photos.

Motomura is happy to have the opportunity to visit Tanjung Piai National Park during her summer holidays in Johor.

Tan says the economy was bad and the outbreak of Covid-19 has reduced the number of visitors to Kukup town.

Said hopes the state government will speed up the new bridge project linking Pontian to the Port of Tanjung Pelepas.