This dirty kitchen shows much of the food preparation is done outside.

MALAYSIANS love to eat out.

Whatever their reasons may be — whether they eat out because they are too busy or too tired to cook — and whether they dine at a posh restaurant or a fuss-free coffeeshop or hawker centre, diners expect these eateries to be clean with food prepared in hygienic conditions.

They also expect the staff, especially foreigners, to be healthy and inoculated.

Unfortunately, not all establishments make the effort to meet the required hygiene requirements set by the Kuala Lumpur Health Department.

After a one-month investigation, StarMetro takes you to the kitchen of restaurants — it is not a pretty sight.

Horror in the kitchens

Barbecued duck may be mouth-watering when it is served hot, but take a moment to wonder where the meat was before it was cut up and served for your dining pleasure.

Before digging into your favourite wantan noodles with the accompanying barbecue sauce, do you ever wonder if the ingredients used were stored in a sanitary manner?

Do you even care if the cook from your favourite fish head curry stall washes his hands after relieving himself at a nearby drain?

StarMetro visited the back lanes and alleys of dozens of popular eateries in Kuala Lumpur, and what we discovered were multiple levels of food safety violations and serious hygiene issues. Some of these infringements even occurred in posh eateries with high ratings by online travel companies.

For instance, we found a duck hooked on a ladder and left to dry in the back alley of a restaurant in Brickfields.

Rodents, lizards and bird droppings were spotted near the duck hung by a kitchen employee of this popular restaurant.

We know it is common practice for restaurants to hang the duck to dry after it is dipped into boiling water for one to five minutes. This process is done to tighten the skin and help the duck achieve its crispy texture.

When we alerted the kitchen staff about the duck hanging at the back lane, an employee took the ladder in without saying a word.

Over at Kuchai Entrepreneurs Park, where several popular eateries are located, an outlet selling wantan and pork meat, left a huge pot of its famous barbecue sauce uncovered outside the kitchen.

The backyard was filthy with rats and lizards scurrying around and we wondered if any creepy crawlies made its way to savour the sauce. Down the same road, we saw many filthy kitchens and the backyard of these restaurants that are testament to their work ethics.

There were violations in literally every step of the food preparation.

After seeing photos of the dirty kitchens, Kuala Lumpur and Putrajaya Health Department director Dr Param Jeeth Singh shook his head and said he was not surprised.

“They spend a lot of money upgrading the front part of the outlet and stinge on the kitchen area, resulting in a packed kitchen, with staff operating under unhygienic conditions, ” he said.

He added that a restaurant in Jalan Imbi, Kuala Lumpur that was ordered to close for 14 days for sanitary issues recently, had a dirty kitchen with evidence of cross-contamination.

Dr Param said eateries in Jalan Masjid India, which were found violating multiple food safety regulations, were also ordered to close to clean up their premises.

“There were rat droppings and cockroaches everywhere and you could see that the kitchen and food storage areas had not been cleaned for some time, ” he said.

In fact, one of the eateries had received a five-star rating by an online travel company.

“When we pay the restaurants a visit, the usual feedback I get from operators is ‘we don’t have time to clean the kitchen, we are very busy’.

“So I shut them down for 14 days and give them two weeks to clean up, and then you will hear all sorts of excuses coming from them, ” Dr Param said.

A matter of branding

Having closed hundreds of dirty restaurants in Selangor, when he was the Selangor health inspector, Dr Param said a restaurant operator’s biggest fear is to receive a notice from the local authority asking them to shut down for unhygienic conditions.

“A 14-day closure notice can do more harm to their business than paying a compound. Money is nothing to them, they are afraid of their image and branding, that can be very devastating, ” he said.

One can relate since this happened not too long ago to Raj Banana Leaf restaurant in Bangsar.

After a dishwashing incident that went viral in 2018, Raj Banana Leaf became the first restaurant in Kuala Lumpur to have its licence revoked by Kuala Lumpur City Hall (DBKL).

Surprisingly a few of the outlets were rated four or five stars by the online travel company.

“It was not an easy task to stomach what we saw during the operation, and public safety is our priority, ” he said, adding that the department had collected crucial proof and evidence.

Dr Param said it was the norm to get multiple calls from politicians whenever he issued closure notices to restaurants.

“When I explained to a certain MP why a closure notice was issued to a popular restaurant in Masjid India recently, he was very supportive of my move.

“We had photos of hundreds of cockroaches as proof, ” he added.

Dr Param said it was clear that operators cared very little about hygiene and food safety in their outlets. Many of the kitchens looked like they had not been cleaned for months and the refrigerators were filthy with evidence of contamination.

The floors and ceiling were dirty, and the kitchen staff’s clothes were dirty and they did not wear hairnets or gloves.

The onus is on the proprietor to ensure that the kitchen, refrigerator and food storage areas are cleaned regularly, if not daily.

“Rats tend to gravitate towards places with food and water, and from experience, I can tell you exactly where they hide, ’’ he said.

Dr Param recounted an incident recently, whereby during a routine inspection, the restaurant owner swore that he engaged a pest control company to clean his kitchen once every six months.

“I went to the area where he stored his onions and potatoes, and lifted the gunny sack.

“Rats and hundreds of cockroaches scurried around, ” he said.

Dr Param agreed that the duck drying at the back lane of a restaurant could have come into contact with rats, lizards, birds, flies, vehicles fumes and rubbish.

“It could be easily contaminated and is the perfect breeding ground for bacteria and has the potential to support the growth of microorganisms, ’’ he added. 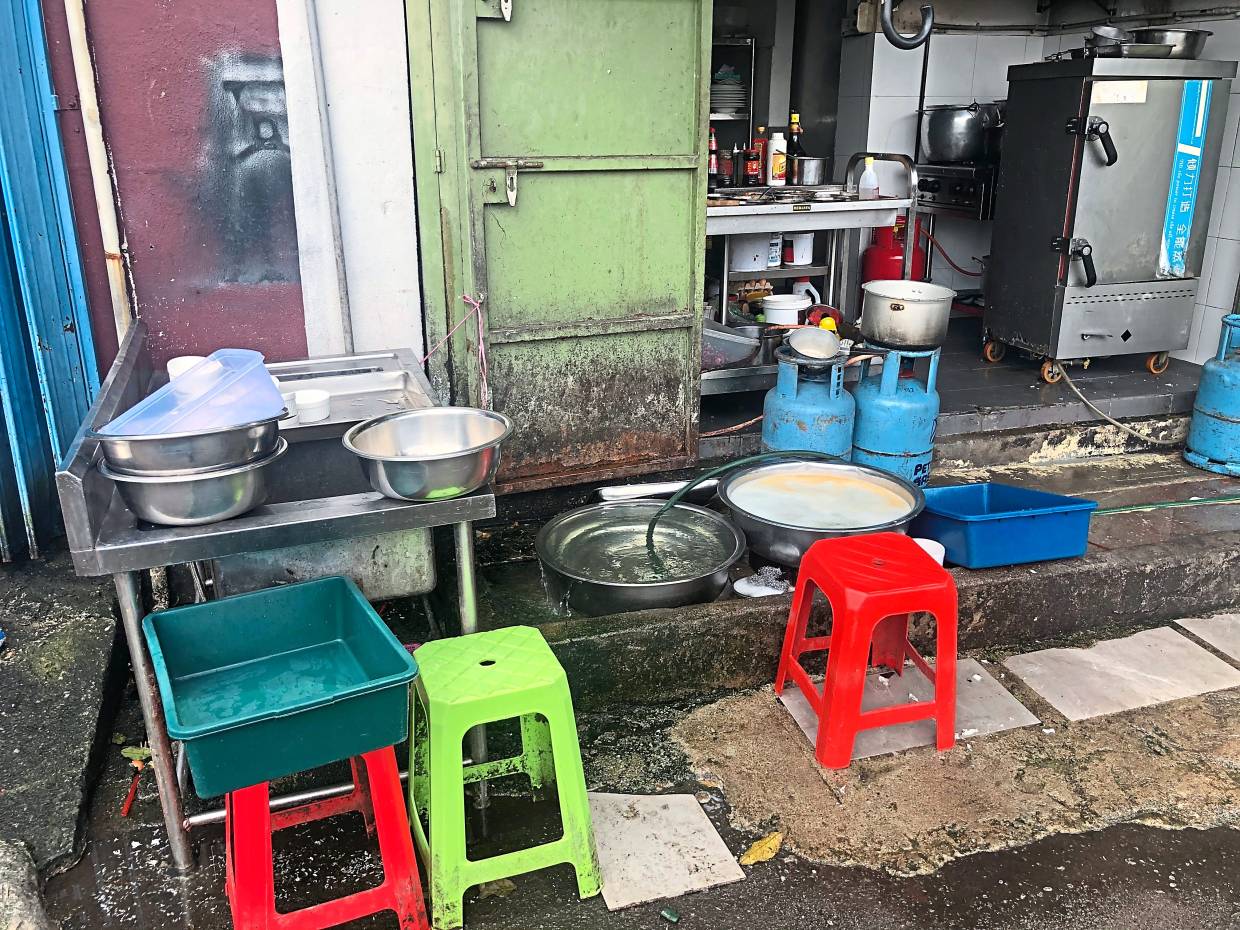 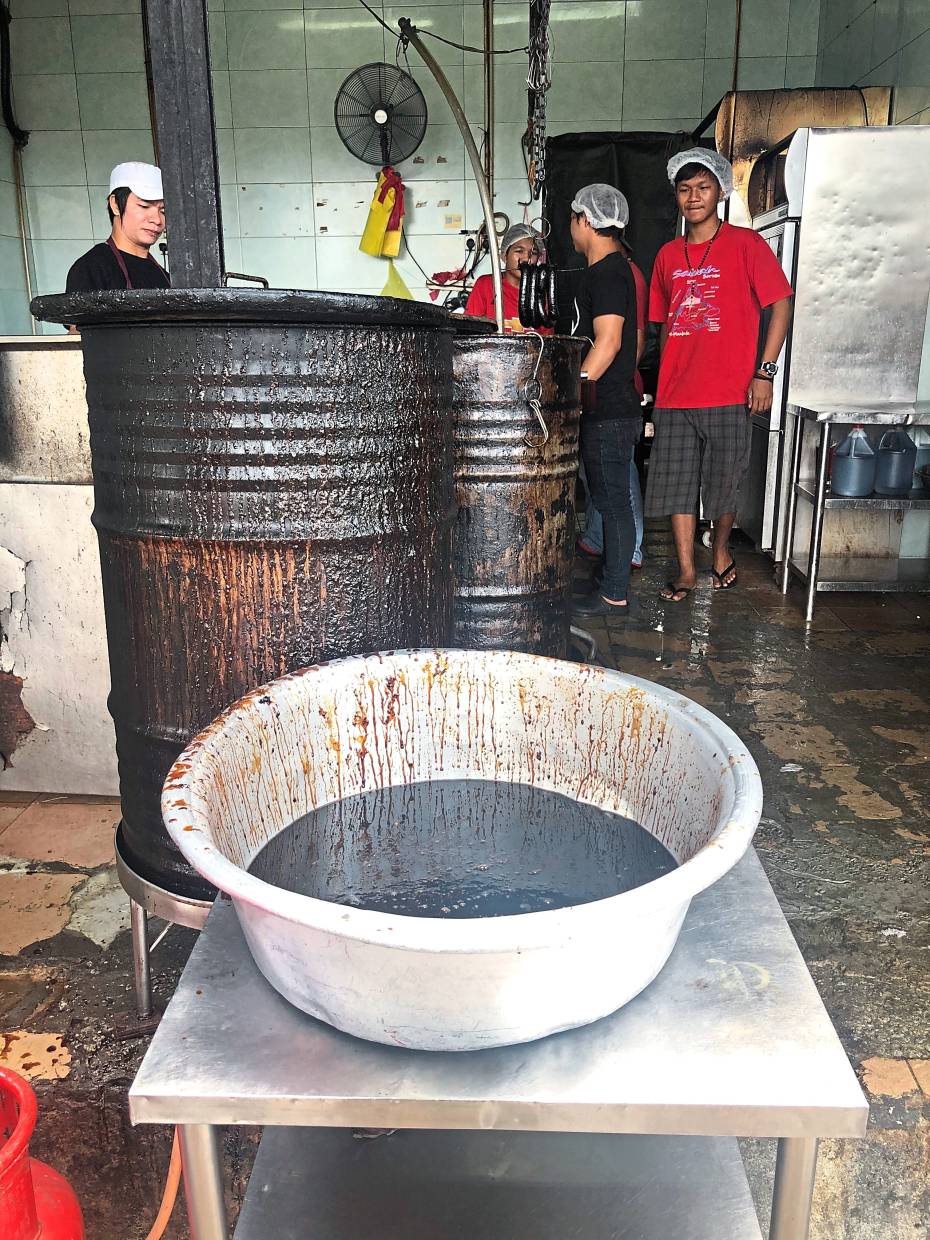 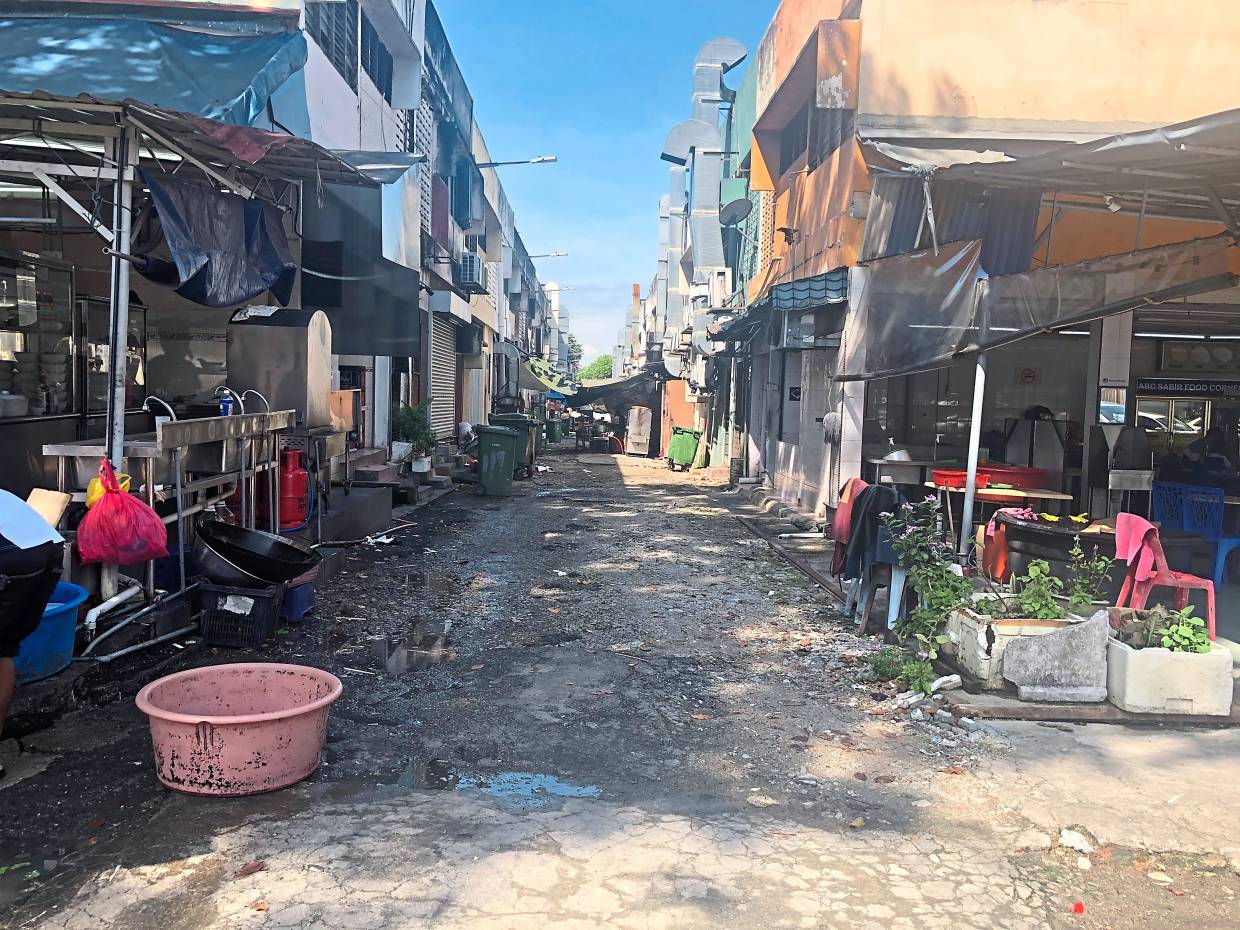 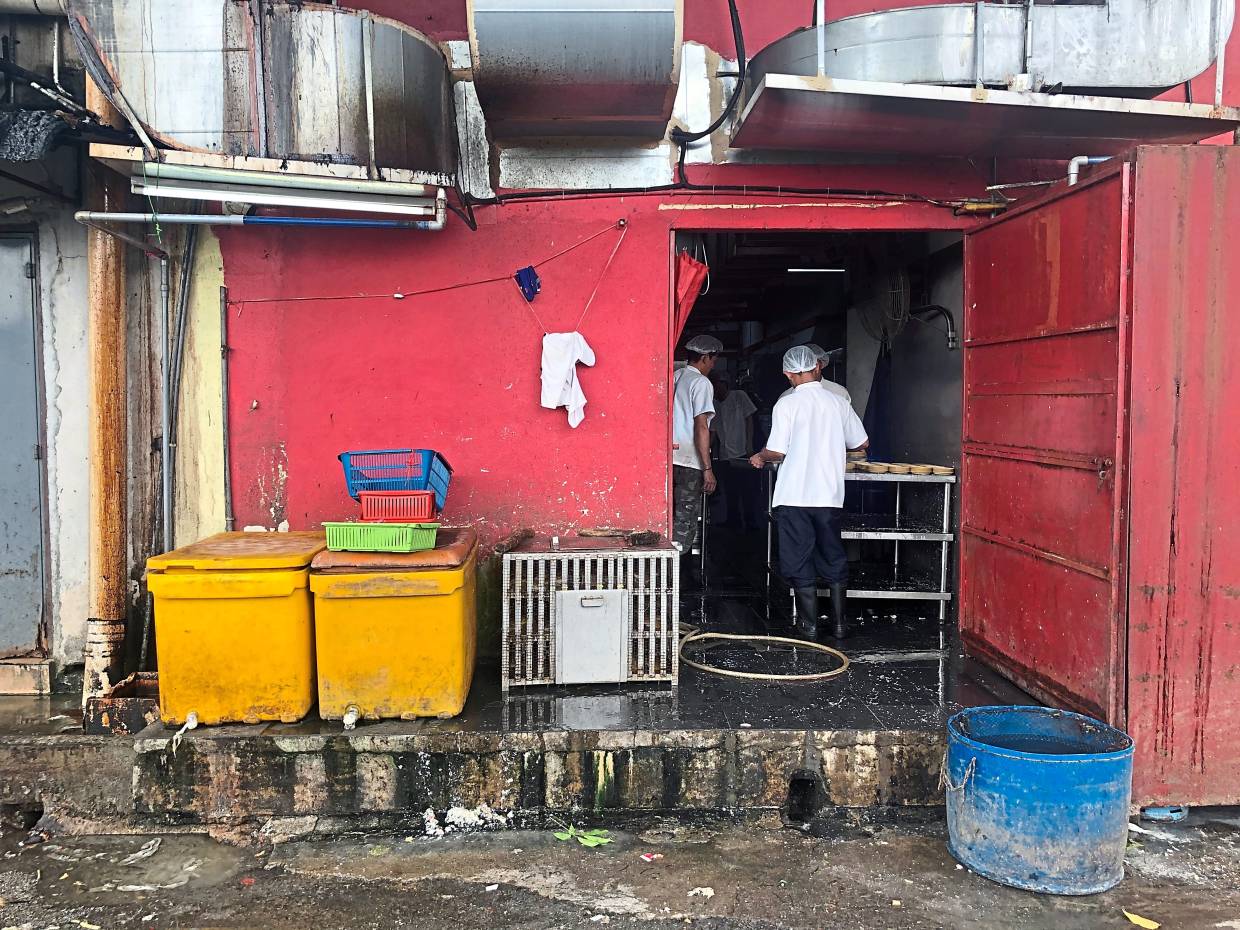 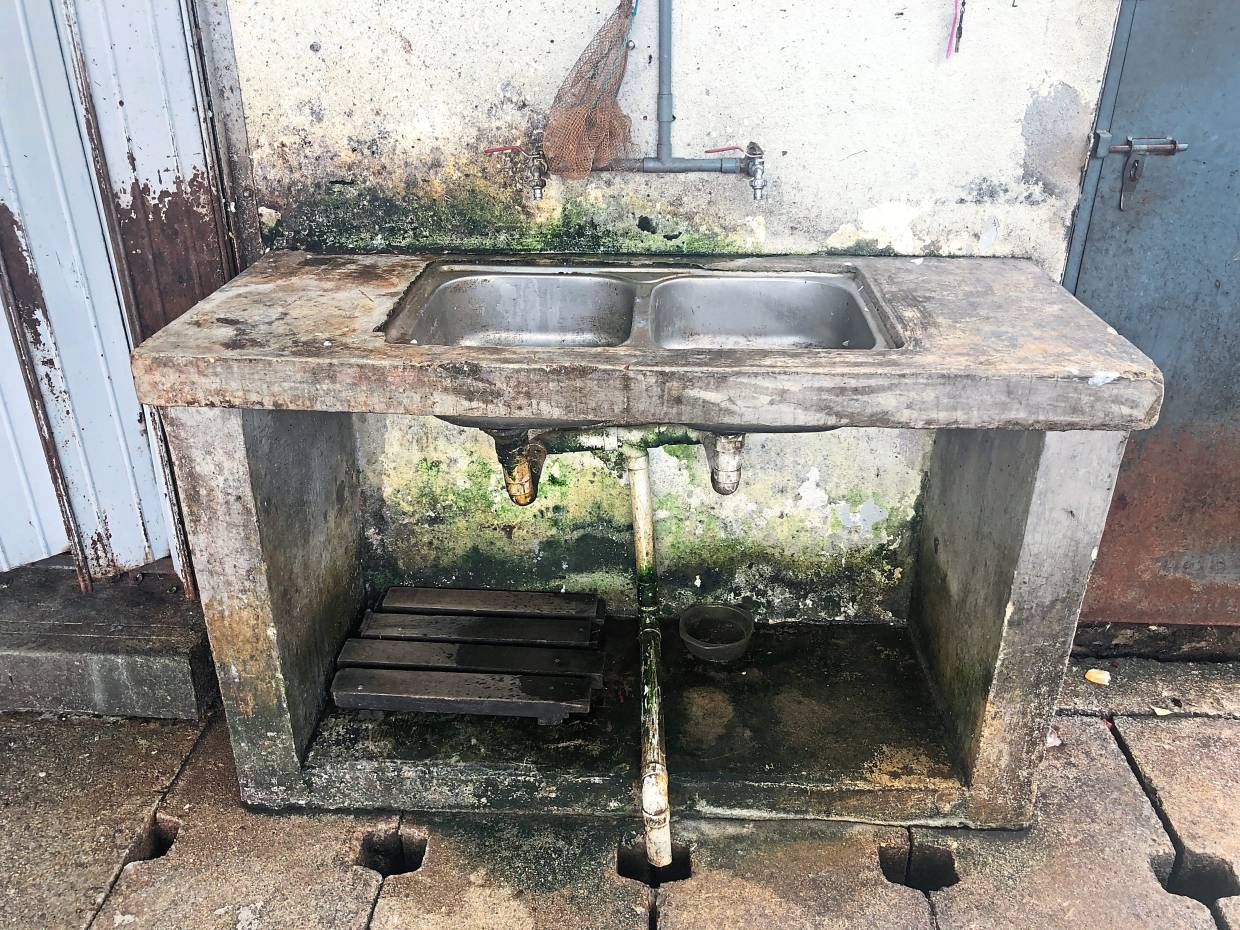 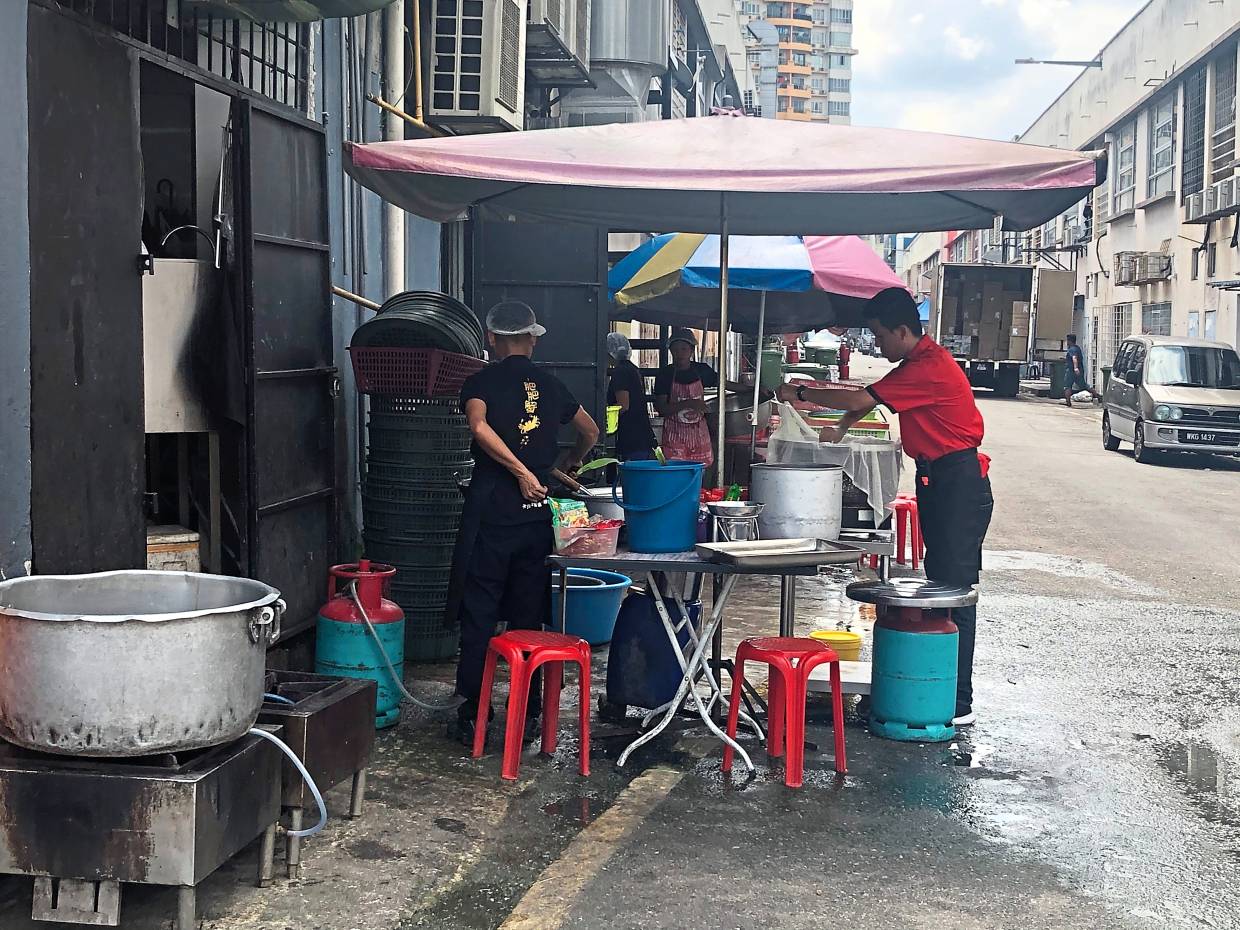 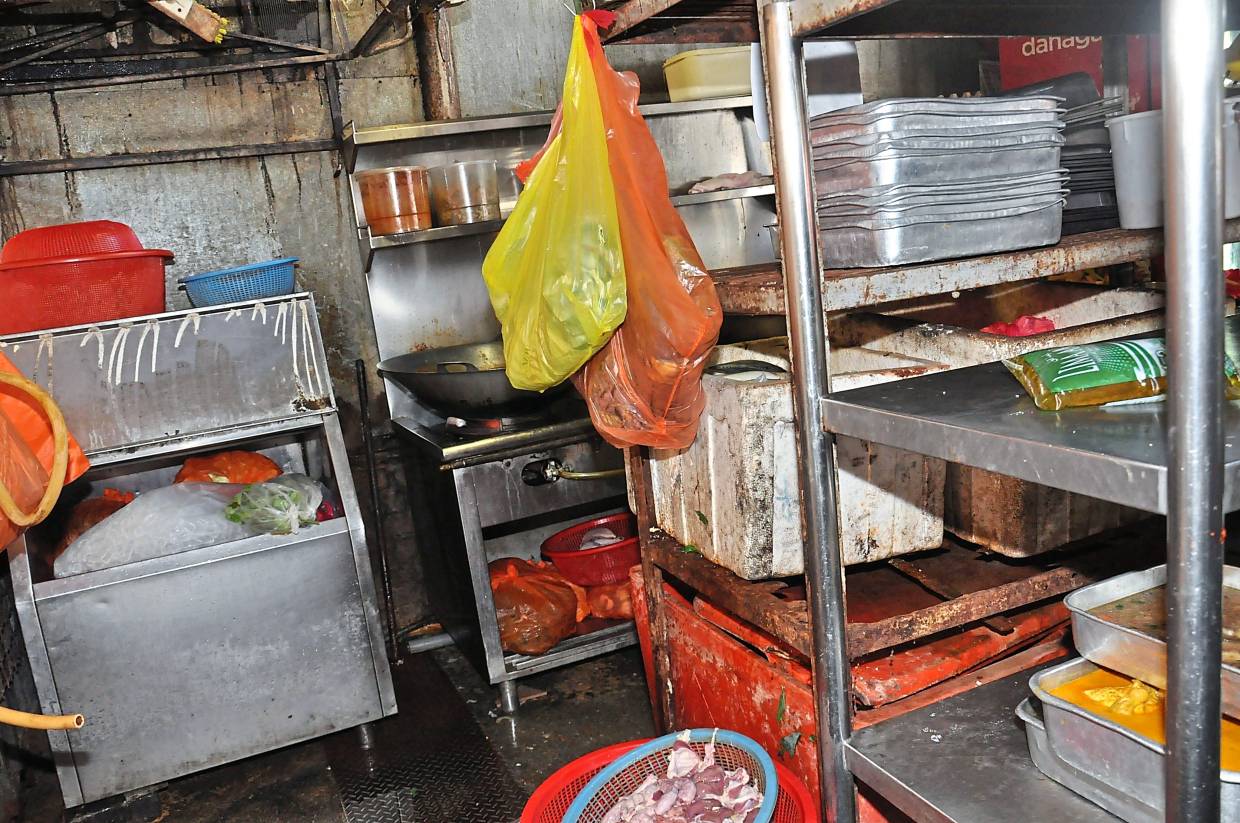 This dirty kitchen shows much of the food preparation is done outside.

A pot of uncovered barbecue sauce kept at the back of a restaurant.

Washed chopsticks left to dry in the open.

An example of a restaurant with a clean facade but dirty back area. Live frogs are stored in these crates outside the eatery.

Dr Param says some restaurants spend a lot of money on beautifying the facade but neglect the kitchen.

This sink at the back of a restaurant looks like it needs a good scrubbing or even replaced.

Most of the cooking and food preparation is done outside the kitchen of this restaurant in Jalan Kelang Lama.

This restaurant which received high ratings online was closed for sanitary violations.