Gladly sweating it out for winter festival

THE Winter Solstice Festival (or Dong Zhi in Mandarin) will be celebrated by the Chinese tomorrow.

The festival will see families reuniting to celebrate the season when the daytime is the shortest in a year.

Malaysia’s Chinese community will celebrate it by making the delicacy synonymous to the festival --- the tang yuan or glutinous rice balls.

Eating and making tang yuan represents unity. There are many types of tang yuan, some filled with red bean paste, peanut paste or sesame paste.

The balls are served in plain or ginger syrup.

It is celebrated a little differently in China, where those from its northern region mark the festival by making meat dumplings together. The meat commonly used in the dumpling is lamb.

The event was organised by UPM students and YDD Restaurant, a Chinese restaurant that is popular for its instant boiled spicy hot pot.

“On that day, people in south of China will make rice balls known as tang yuan with family members.

“Tang yuan is an auspicious symbol for families coming together during winter solstice, ” she said.

Made from glutinous rice flour mixed with water to form balls and cooked in boiling water, tang yuan can be either small or large, filled or unfilled.

The round shape of tang yuan symbolises family unity and perfection.

Qin said that in south China, every family had to make rice balls and place them at windows and doors to worship the gods and ancestors.

Relating the tale behind the festival, she said during Chinese New Year, a poor family was begging on the streets.

“When the mother died, the father was too weak to find means to bury his wife.

“So the daughter sold herself as a servant to a rich man to get money to bury her mother.

“Before parting ways with her father, the girl promised to stick two glutinous rice balls on the front door of her new master’s house for her father to locate her wherever she might be during winter.

“The following winter, the girl told her employer to place two rice balls at the door to welcome the God of Wealth, which the rich man did.

“Five years on, the father and daughter were reunited when he found the rice balls one winter.

“Not forgetting their bitter past, the father and daughter placed the rice balls on the front door every winter festival.

“Their custom was imitated by the neighbouring folk who wished to reunite with their long lost family members too.”

This tradition apparently originated from a famous scientist named Zhang Zhongjing who lived during the Han Dynasty (206 BC–220 AD).

“While on his way to his hometown in Nangyang in the Henan province one day, he saw the poor suffering from severe chilblain on their ears due to the extremely cold winter.

“He cooked dumplings with lamb and medicine to be distributed to the poor.

“Since that day, it became a tradition to eat lamb dumplings during Winter Solstice, ” said Qin who hails from Xian in northern China.

Speaking at the students’ Winter Solstice gathering, Qin said most Chinese studying in Malaysia would go out for dinner with their friends during the festival.

“We hope that through this organised event, students from China can feel the lively winter solstice festival atmosphere even abroad, ” she said.

YDD restaurant owner Wong Sau Loon said he was glad to have the Chinese students over to celebrate the festival together.

“Everyone wants to be close to family for Winter Solstice.

“Malaysians can meet up with their family members at anytime, but that is not possible for the China students who are studying here.

“I am honoured and happy to support them with this Winter Solstice celebration, ” he added.

At the Winter Solstice event, students were divided into two groups, one to make lamb dumplings and the other tang yuan.

APU student Bao Yushan, 22, who has lived in Malaysia for three years, said it was the first time she participated in such a programme making dumpling and tang yuan to celebrate Winter Solstice.

“In my hometown, we eat dumplings and mutton soup during the Winter Solstice, but tang yuan is the traditional food for Lantern Festival.

“The tang yuan in Malaysia is small, it is more like dessert. In China, the tang yuan is bigger and they have either salty or sweet stuffing.

“I used to eat out with friends during Winter Solstice. This time I am so happy to be able to make dumplings with friends, ” said Bao.

Huang Jingwen, 19, who just arrived in Malaysia, was excited to participate in the dumpling-making activity and to spend her first Winter Solstice in Malaysia.

“I don’t feel homesick because I have friends here who make me feel at home.

“The biggest difference between the Winter Solstice in Malaysia and in China is the weather, ” said Huang, adding that it was a first for him celebrating the festival in hot weather. 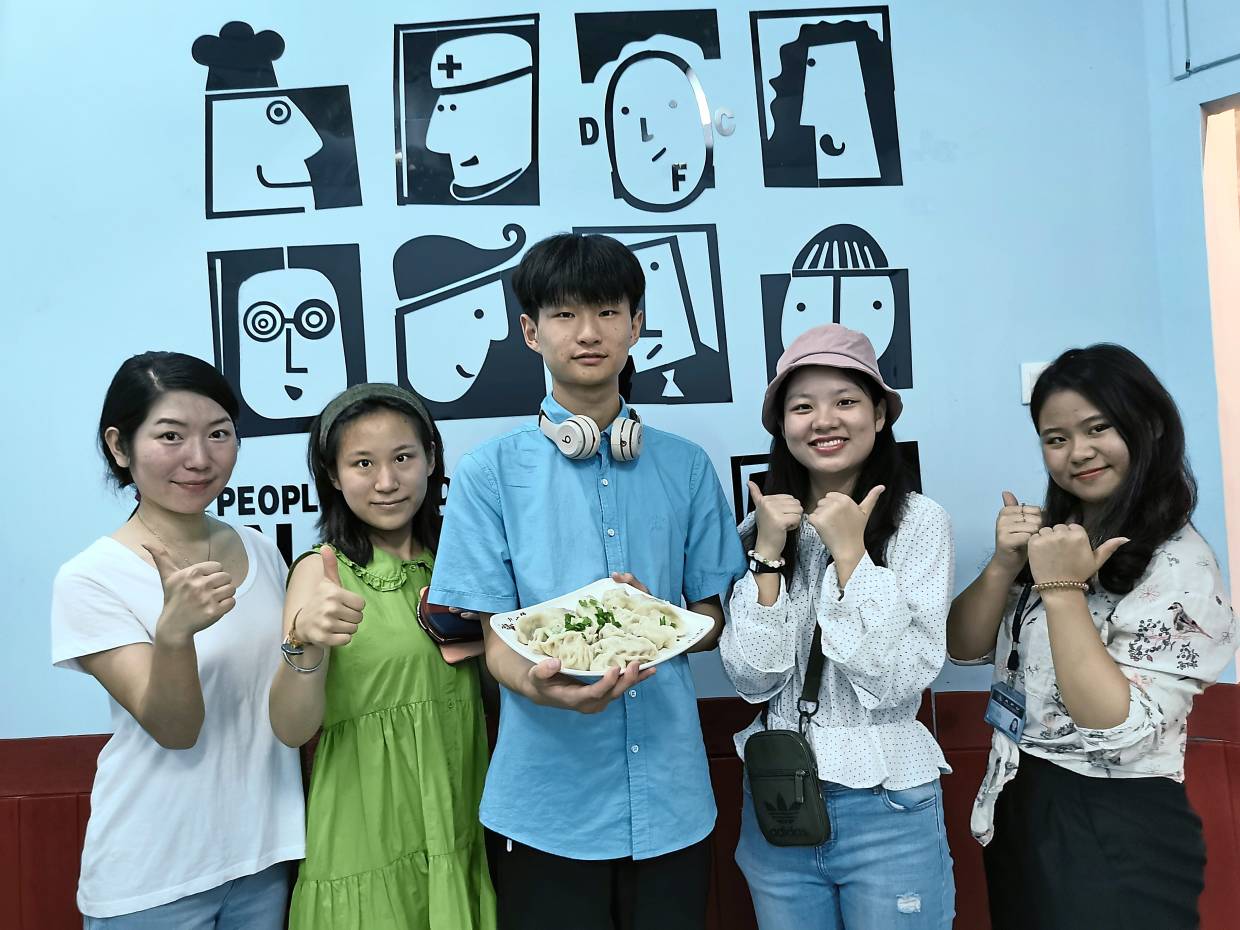 The lamb dumplings made by the students during the Winter Solstice celebration.

Giving themselves the thumbs up for making the lamb dumplings are (from left) Qin, Zong Yijie, Zhang Henquan, Bao, and Huang.

Qin (left) and other students from UPM and APU busy making the lamb dumplings during the Winter Solstice celebration.