Lata Medang is recognised as one of the more difficult destinations. — Photo from Tourism Selangor website

CLEAR ice-cold water that softly touches your skin, the peaceful sounds of nature that calm your mind and unpolluted air that remains fresh.

People who love nature often have to travel far from the city to enjoy such an environment.

But those living in Selangor are fortunate to have recreational sites provided by Mother Nature within their borders, only about an hour’s drive on average from their suburbs.

This state has numerous waterfalls at varying distances and levels of difficulty to get to. Some do charge a token entrance fee, as little as RM1 per person, to help in the area’s upkeep.

Here are StarMetro’s pick of 10 waterfall destinations to treasure in Selangor.

Don’t forget to plan your trip properly and be alert to your surroundings. Waterfalls can be a dangerous place if one is not careful, so do exercise caution at all times when visiting such destinations.

1. Kanching forest reserveKanching Waterfall is located in the heart of Selangor, near Rawang. This waterfall is easily accessible and is a perfect spot for family gatherings. Its unique seven-tier cascades are one of the main attractions for hikers. Each tier offers different natural elements of surprises that leads to crystal clear pools.

This is also the only place one will find the Giam Kanching trees, a protected species because it is critically endangered.

The park has facilities for visitors, so you do not have to worry about being hungry after a long swim!

One thing you have to remember when outdoors, there is always a food thief that is not picky about its victims. Yes, beware of monkeys, always keep an eye on your belongings.

recreational parkKemensah Waterfall, or better known as Batu Asah Waterfall, is situated near a small village – Kampung Kemensah – in Hulu Kelang, towards Selangor’s border with Pahang.

The route to the falls leads you through changing phases, where you start in heavy traffic and transition onto a narrow road with peaceful, natural surroundings.

The journey will leave you marvelling at how a place with so much greenery and fresh air exists so close to a bustling city.

There is a variety of recreational and outdoor facilities set up around this popular waterfall –chalets, all-terrain vehicle rides into the hilly jungle and a special track for cyclists and hikers to explore the forest trails.

This waterfall is easily accessible by car, and that is why it is always crowded on weekends.

Its cold and refreshing water is said to flow from Gunung Besar Hantu in Negri Sembilan.

Gabai falls is famous for its 12 levels of waterfall that offer a challenging route where you have to climb 336 steps up a stairway to reach the peak, which offers a breathtaking and fascinating view. Thus, it is a favourite spot for photographers.

Sungai Tekala Waterfall in Semenyih is one of the state’s magnificent waterfalls, located about 18km south of Gabai.

With almost 9,000 visitors a month, Tekala is favoured by parents as they find the river current not too strong, making it a relatively safer option compared to other places.

The facilities seem to be well-maintained and many families come here for picnics.

5. Chiling waterfallLooking for a place to chill on the weekend or public holiday?

Chiling Waterfall in the north, between Selangor’s Kuala Kubu Baru and Fraser’s Hill in Pahang, will instantly give you the “chill” feeling with a dip in any of the six waist-high rivers here.

Despite its location in a remote area in the vicinity of an Orang Asli village, Kampung Pertak, it has become one of the recreational hotspots for tourists.

The waterfall has three levels but visitors are only allowed at the first level as the rest are not open to the public.

For many urbanites, Chiling falls’ beauty is worth the approximately 80-minute drive from Petaling Jaya.

forestSendat River Waterfall in Ulu Yam is easily accessible and does not require trekking to get to the cooling waters.

Anyone who lives in the Batang Kali area will most likely know this hidden gem.

It is about 55km from Petaling Jaya, near enough for those seeking a brief break from their stressful work environment.

This waterfall has three levels. The base level is suitable for swimming. The second level is shallow and thrill-seekers often slide down the big rock from here into the water at the base level.

And if you are looking to soothe your body with ice-cold water, you can jump into the pool located at level three.

This place also offers facilities for various activities such as camping and hall rental, including for film shooting.

Lata Medang is recognised as one of the more difficult waterfalls to get to.

Located just 3km south of Chiling, it is less appealing to families with very young children and instead attracts hikers as it involves trekking trough the jungle.

The trails are quite easy though, even for amateur hikers. It will take about two hours to reach the waterfall.

At the beginning of the trail, you will see Kuala Kubu Baru Dam. Along the way there is plenty of flora and fauna to admire.

Interestingly, the trail to Lata Medang is connected to the Bukit Kutu peak.

8. Lolo fallsLolo Waterfall is considered one of the compulsory stops for hikers. It is located at the edge of the Gunung Nuang Recreational Forest near Kampung Pangsun in Hulu Langat. Nuang is among the most popular extreme hiking spots.

Bomoh Ali and Berembun are two unspoilt cascades in the area.

Visitors need to register at the ranger station when they arrive at the recreational forest.

One hour of trekking on Gunung Nuang will lead you to river trails. Across the river is the first stop – Bomoh Ali. From here, you have to swim and climb slippery rocks in order to reach the second waterfall, Berembun.

Hikers use the same track to Lolo as Nuang.

This waterfall is not recommended for families because it is difficult to get to.

This waterfall, alternatively spelled as Lepoh, promises an educational walk in the forest where you can see ginger flowers and bamboo groves preceded by fruit orchards such as durian, pulasan and langsat.

Although the trek is uphill all the way, it is not strenuous. Although some parts of the trail are tougher, soon enough you will reach flat ground. The payoff is at the end of the trail where you will see the undisturbed waterfall with crystal-clear cascades.

fallsPisang Waterfall is one of the nearest to city slickers, particularly those living in Petaling Jaya as it is about 35km away.

But the journey to the falls is adventurous.

One has to start trekking from Jungle Lodge along the old Jalan Gombak route to Genting Highlands. Hikers go through tall grass and ferns before walking along the riverbank.

After crossing the tunnels beneath Karak Highway, hikers emerge in another world as they find themselves inside a century-old forest with entwined tree roots and babbling brooks that makes it all feel magical.

There is a campsite near the waterfall for those who enjoy camping.

Trails in permanent forest reserves will be closed until Jan 31,2020. 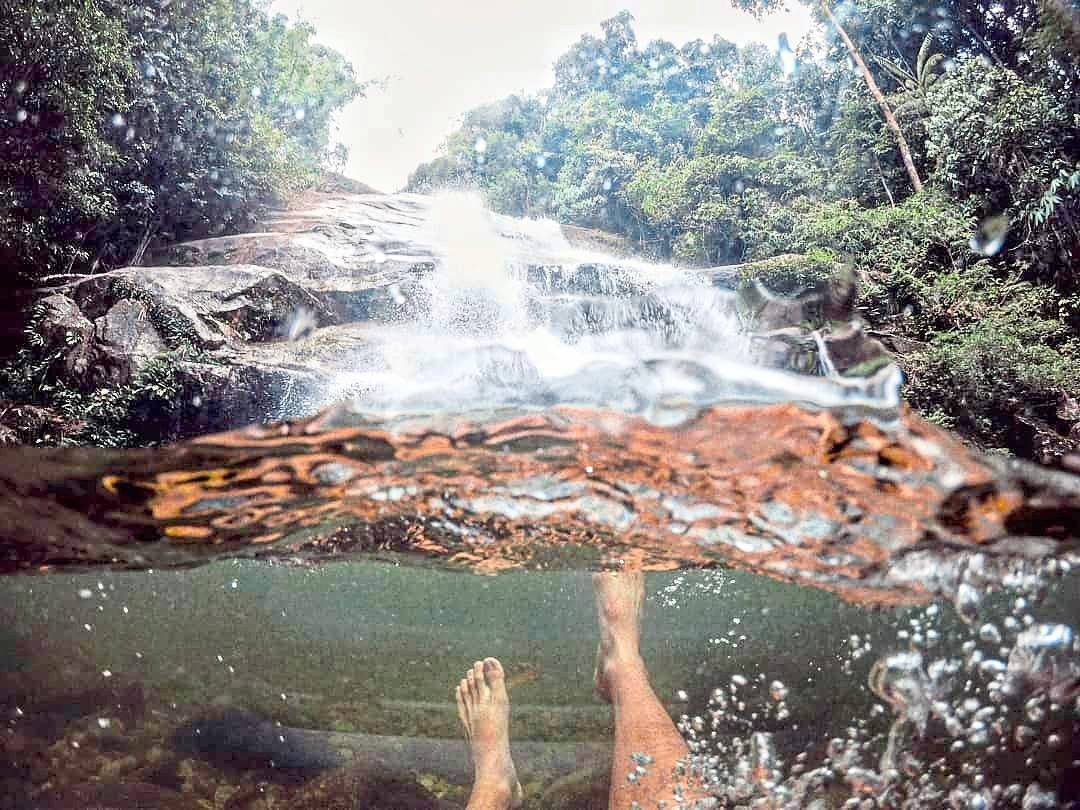 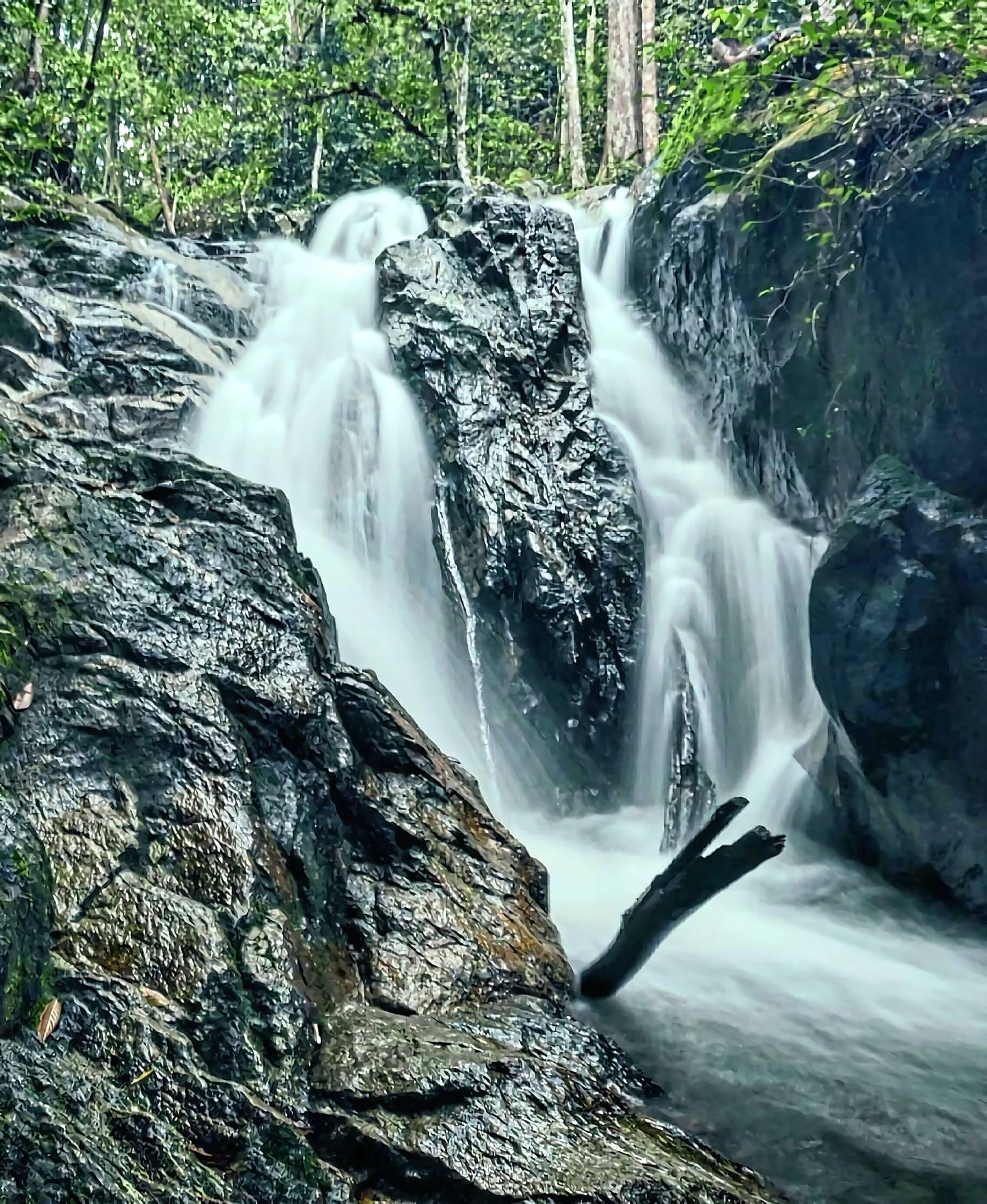 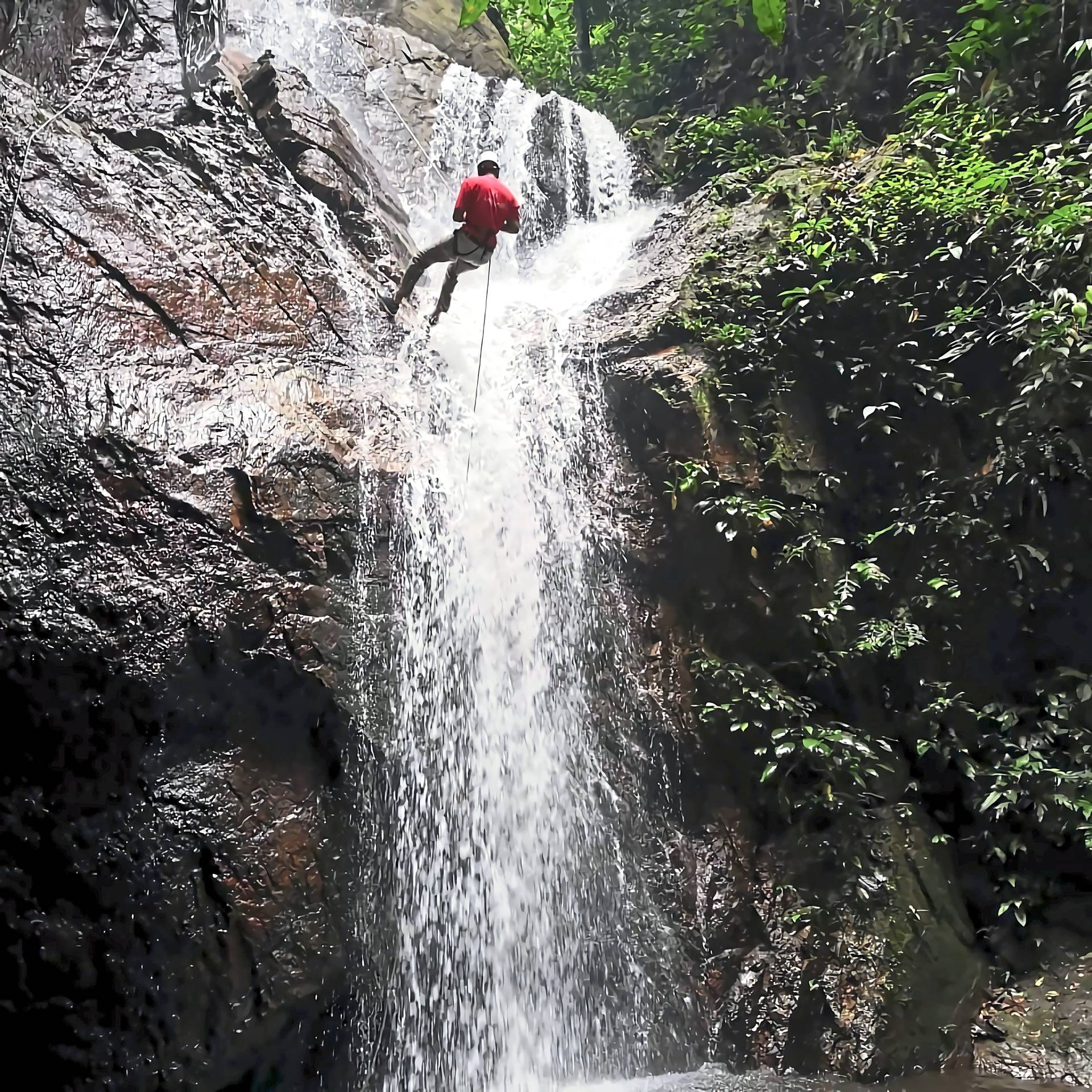 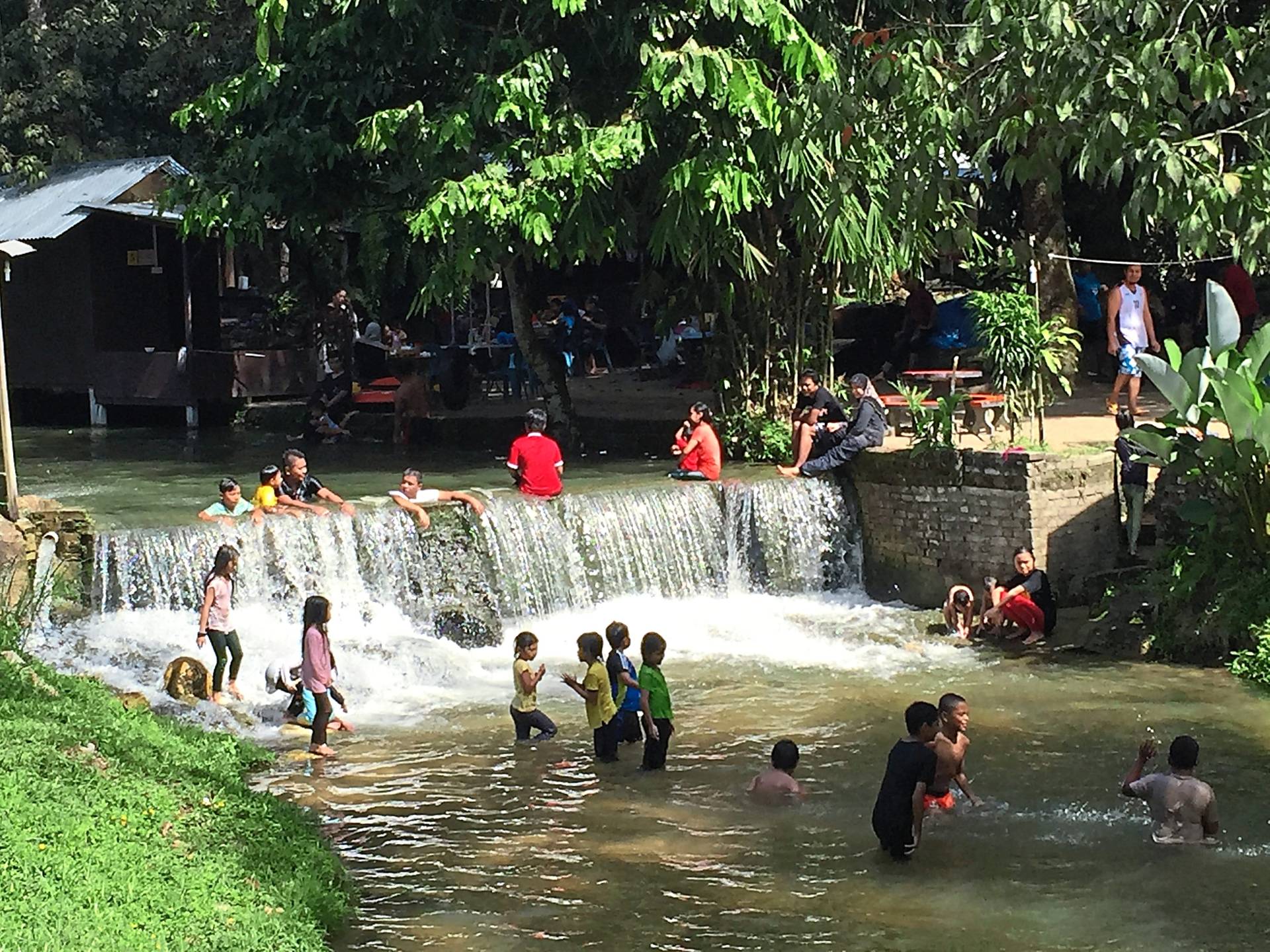 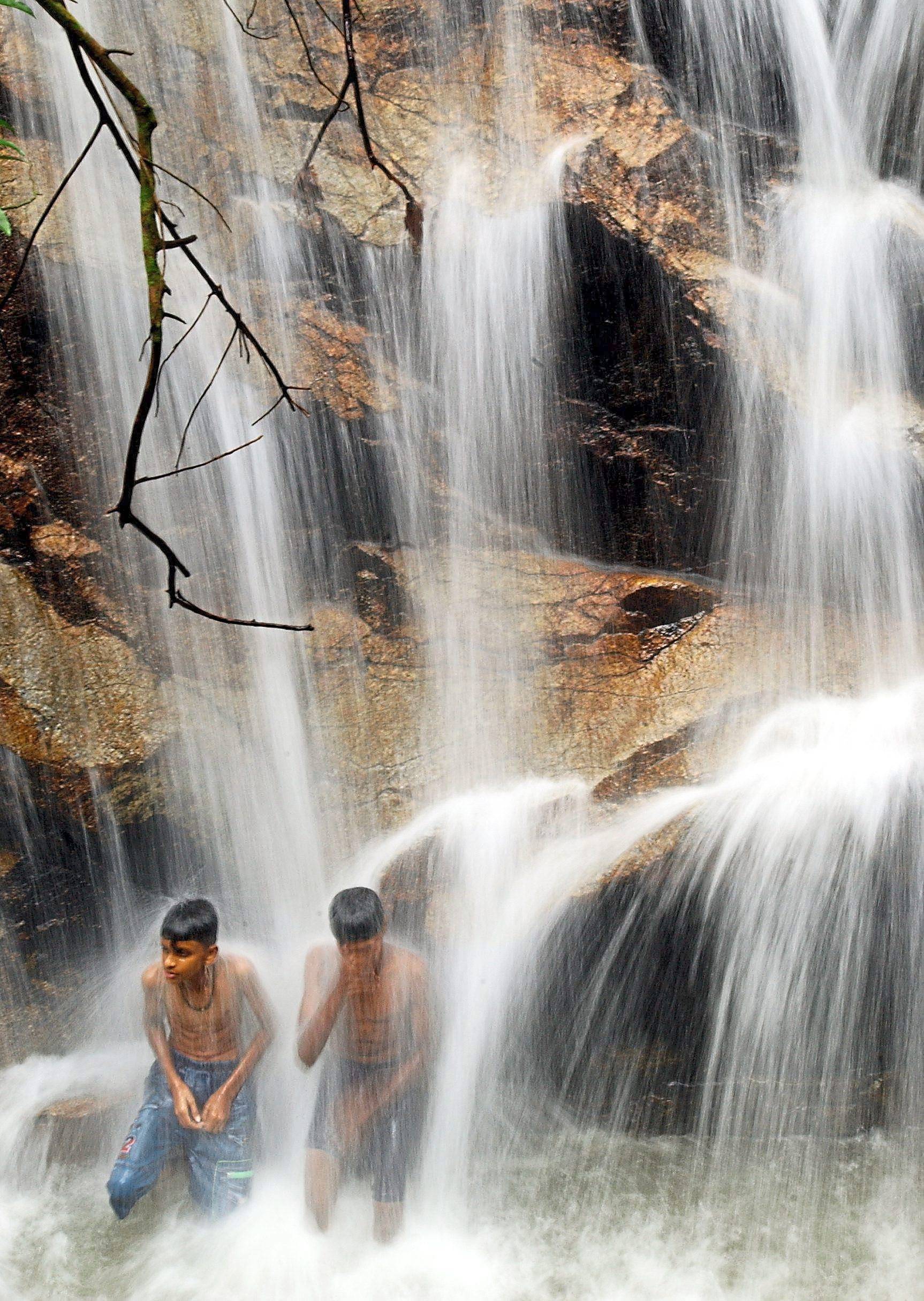 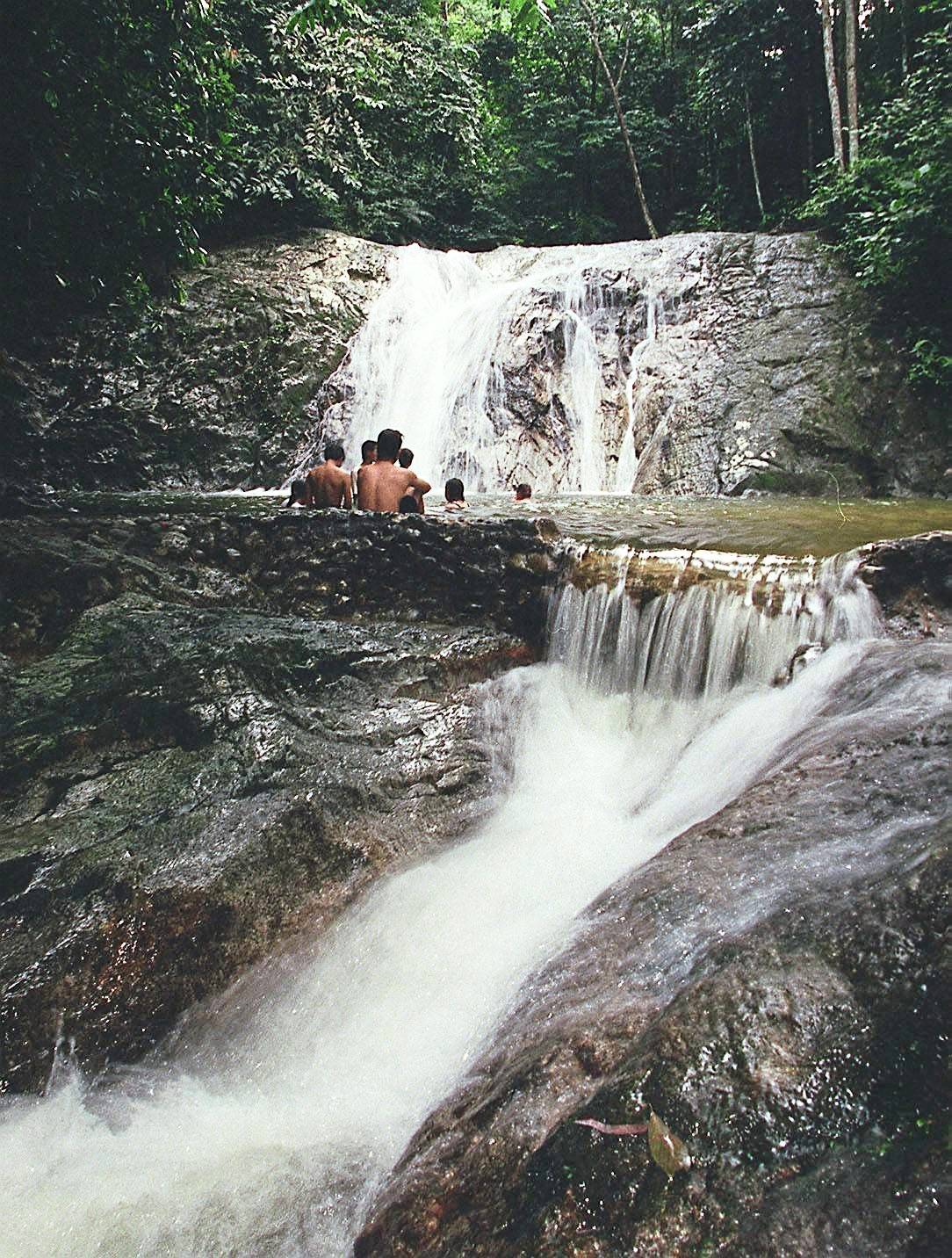 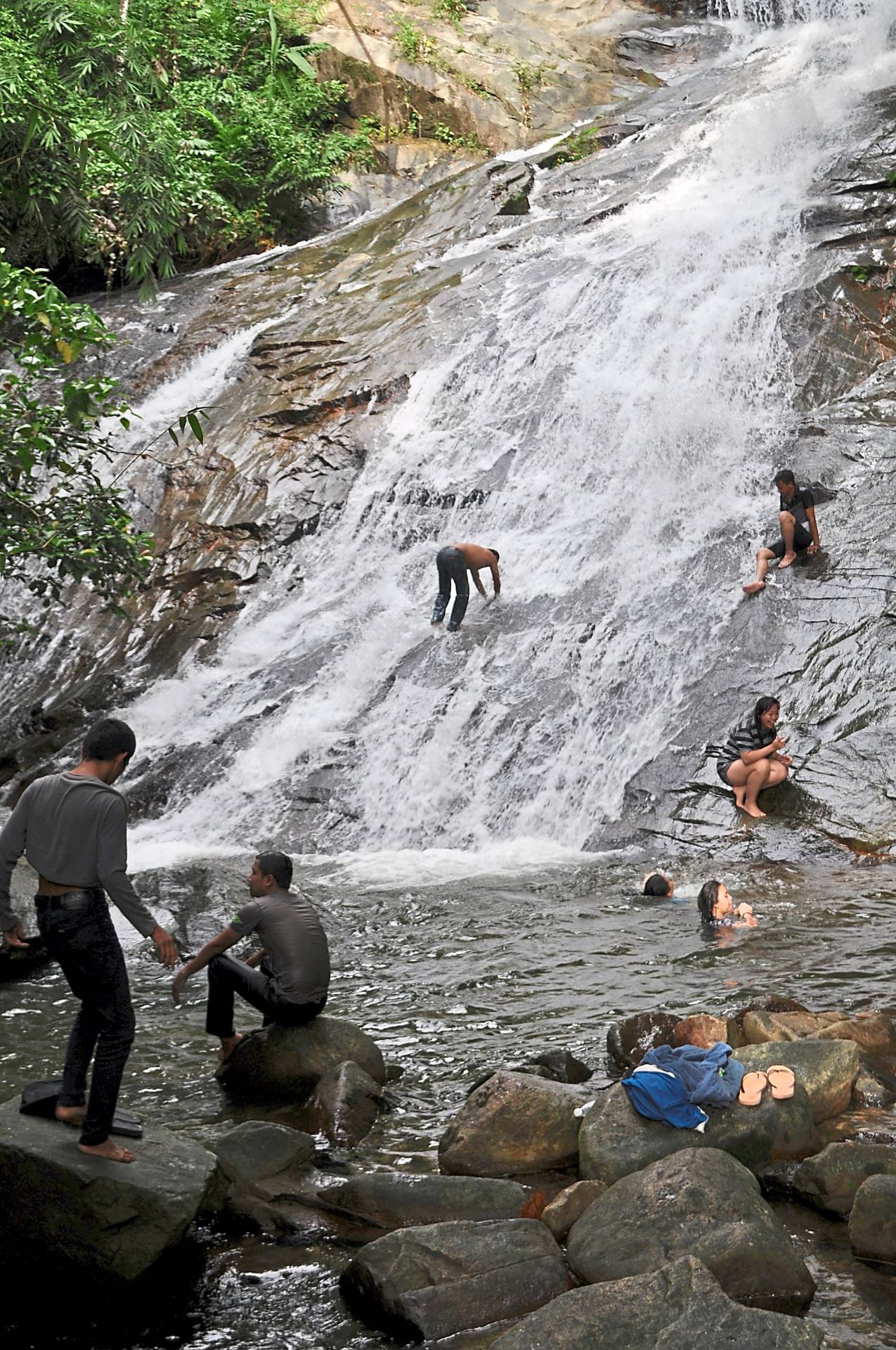 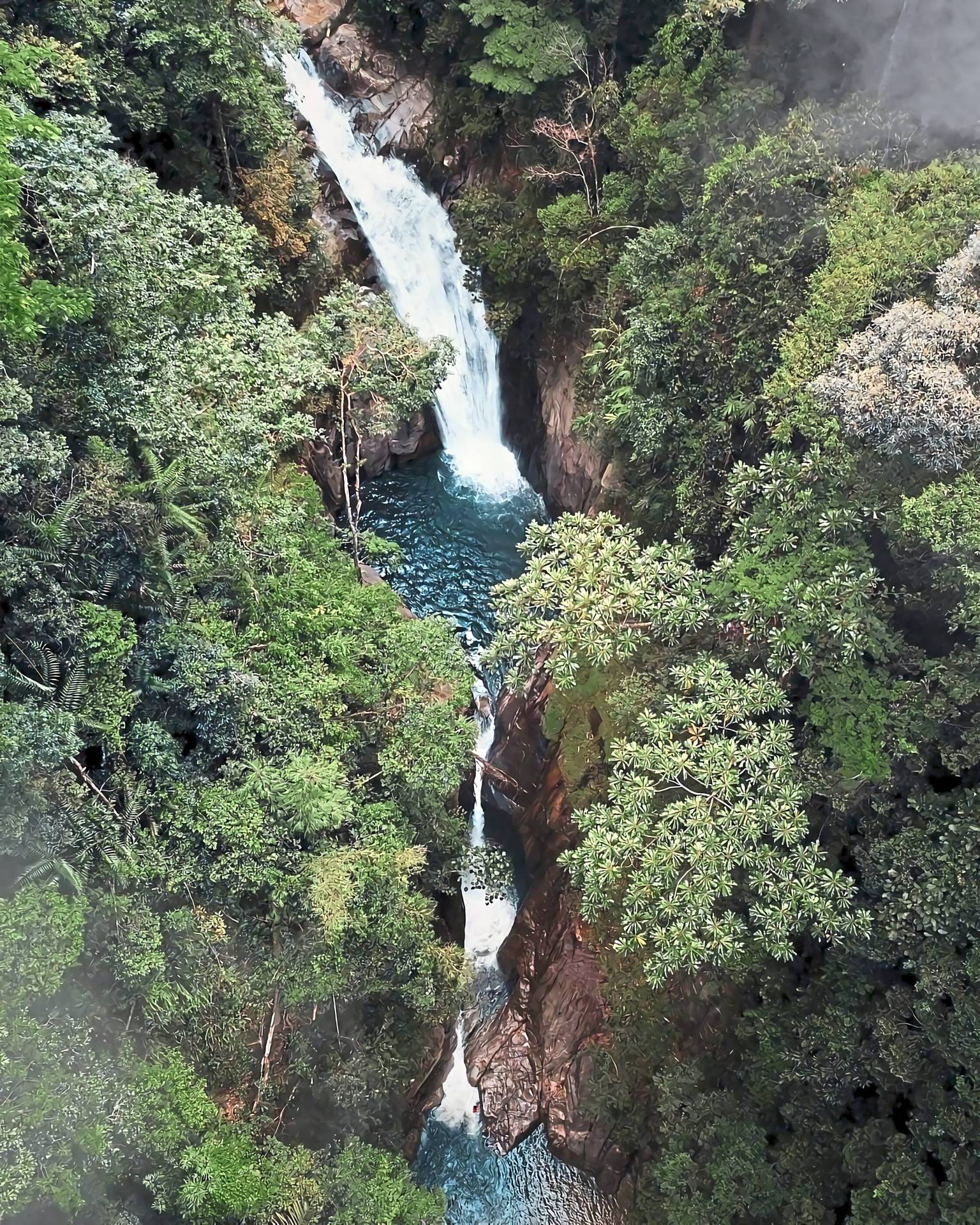 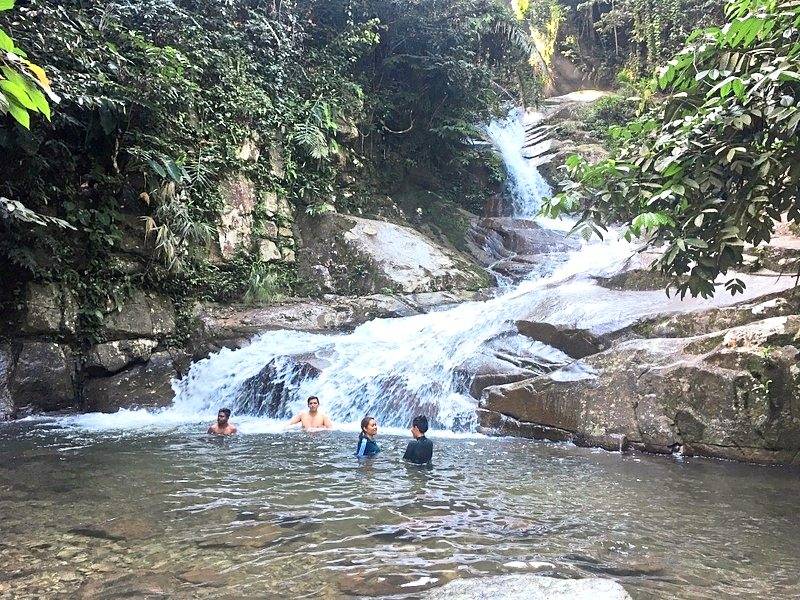 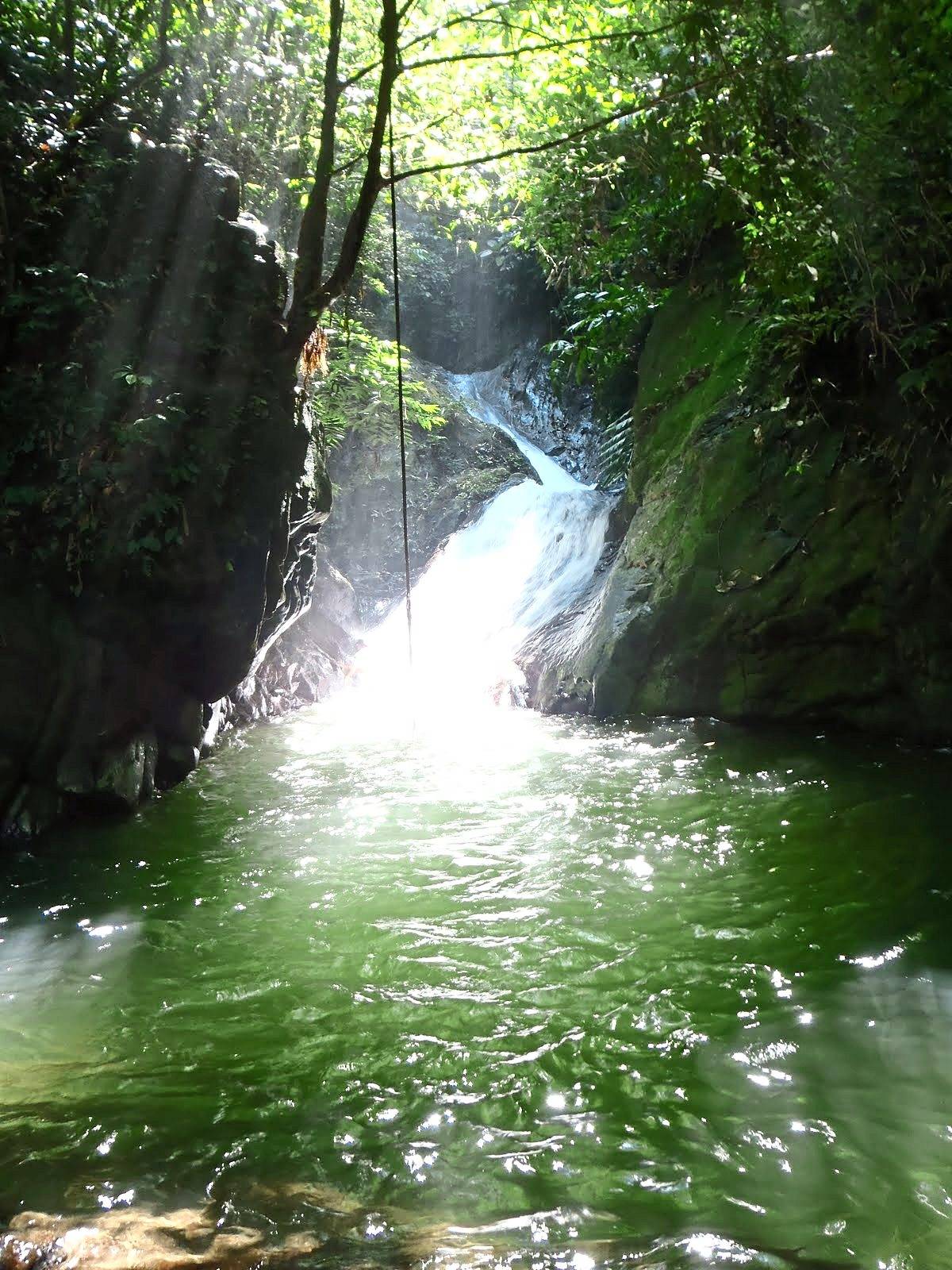 Lata Medang is recognised as one of the more difficult destinations. — Photo from Tourism Selangor website

Sungai Tekala Waterfall is a favourite with families. — Photo from Tourism Selangor website

Visitors have to pass through two tunnels beneath Karak Highway to reach Pisang River Falls. — Photo from Tourism Selangor website

Kemensah Waterfall is family-friendly and has facilities for recreational and outdoor activities. — Filepic

At Sendat Waterfall, thrill-seekers slide on a big rock down to the water at the base level. — Filepic

Gabai Waterfall has 12 levels and visitors have to climb up 336 steps to reach the top. — Filepic

There are three levels of waterfall at Chiling, but only the first level is open to visitors. — Photo from Tourism Selangor website

The trail to Lepok Waterfall is an educational walk in the forest. — Filepic

Lolo Falls are among the compulsory stops for hikers trekking up Gunung Nuang in Hulu Langat. 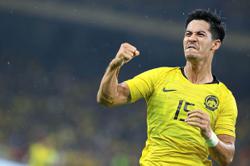