THE government will move towards adopting a “stick rather than the carrot approach” in taking stricter action against those found with Aedes mosquito breeding grounds in their premises, said Selangor Mentri Besar Amirudin Shari.

“It is time we start exerting pressure, either in the form of enforcement or summonses, to government agencies, residents and anyone who does not ensure the cleanliness of their area and play their role in reducing the dengue disease,” he said.

“The state government has already started sending out letters or notices to premises where mosquito breeding spots were found. Local councils are also authorised to take similar action.

“In addition to the ‘carrot approach’ such as programme incentives, we have organised numerous campaigns, held gotong-royong and distributed larvae control drugs, but the level of awareness is still not there.

“So it’s time to take sterner action to ensure people take the anti-dengue campaign seriously. We need to execute real change in the community so the disease can be controlled.” Mohd Salleh (in red cap) explaining the dangers of dengue and Aedes mosquitoes to visitors.

Selangor health, welfare, women and family empowerment committee chairman Dr Siti Mariah Mahmud noted that there was close to a 100% increase in dengue cases and deaths this year compared to last year.

“The dengue cases in Selangor is very worrying, with the trend showing a wave of increase happening after the Hari Raya period,” she said in her speech. 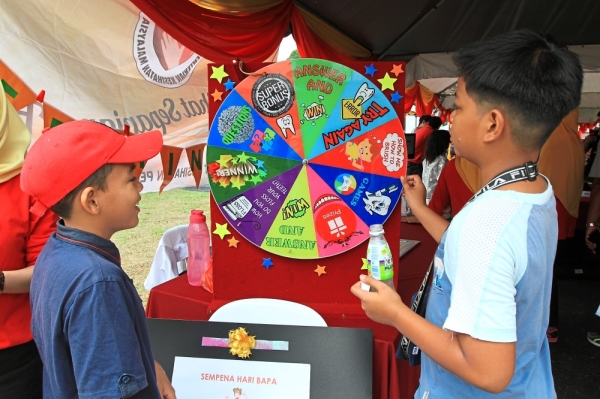 Children playing educational games to test their dental health knowledge at the booth run by the Gombak District Dental Clinic.

“There was a significant increase after the festive period, with 1,437 and 1,487 cases during epidemic weeks 25 and 26 respectively.”

It was previously reported that the Wolbachia project is an innovation to tackle dengue by injecting Wol­­bachia microorganisms into Aedes Aegypti mosquito eggs.

“The Health Ministry ran a pilot study on the Wolbachia project in seven hotspots in Selangor, one of which was Dataran Otomobil in Shah Alam, and was able to successfully reduce dengue cases between 50% and 80%,” said Dr Siti Mariah. “This biological control measure will be expanded to other localities, especially uncontrollable and hotspot areas.”

The 3W Carnival was held in collaboration with Selayang Municipal Council (MPS), with a focus on observing Zero Dengue Day and Fathers Day.

Taman Jasa Utama Combi chairman Mohd Salleh Bachik was on hand to share how his Communication for Behavioural Impact (Combi) team was able to transform a hotspot into a dengue-free zone within three years and maintain the status.

“Back in 2009, our housing area recorded 37 dengue positive cases, though fortunately there were no deaths,” he said, adding that Taman Jasa Utama had

about 500 premises, including shoplots and most of its residents were Malay.

“Upon the district health office’s suggestion, we set up a Combi team that included 10 committee members and about 25 promoters — one for every street in the neighbourhood.”

Mohd Salleh said it was the promoters’ duty to convey information, remind residents do to their 10-minute weekly check and monitor their streets for mosquito breeding grounds.

“They would even advise residents to discard unwanted items properly and stack excess flowerpots upside down to prevent water from pooling.

“Through the residents’ cooperation and with assistance from agencies such as MPS, Taman Jasa Utama has been a dengue-free area since 2011,” he said, adding that they were proud of their success story.