General Zulkifli with some of the officers and personnel after the Sungai Panching Camp MAB Operations parade ceremony.

KUANTAN: The development of the fully equipped Joint Force Headquarters (MAB) Complex in Sungai Panching here will enable the planning, co-ordination and joint operations handling aspects to be implemented in an orderly manner.

Malaysian Armed Forces (MAF) chief General Tan Sri Zulkifli Zainal Abidin said the coherency, commitment and cooperation of the three branches of service, namely land, sea and air, were very much emphasised upon to ensure national defence would continue to be strong. 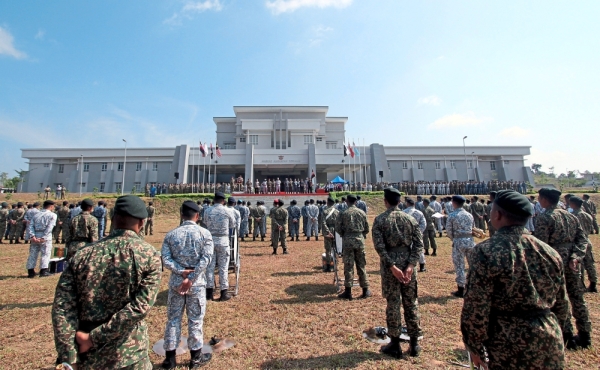 The parade ceremony at the complex. — Photos: Bernama

In addition, developing the capacity of the MAF was always prioritised, including in the development of the complex on a 39 ha site which was also equipped with an administrative centre, operations centre and a sophisti­cated joint warfare centre which could accommodate a large number of exercise participants.

‘’The complex also proves that we have the capacity to conduct in situ training with adequate and sophisticated infrastructure and facilities,’’ he said at the Sungai Panching Camp MAB Operations parade ceremony here.

The parade comprised 50 officers and 113 personnel of various ranks from the three branches of the MAF stationed at the MAB, headed by J3 director of Global Operations Colonel Norazman Taib.

Zulkifli said the existence of the Sungai Pancing MAB had made history in the MAF service as one of the headquarters in South-East Asia which had its own complex and administration centre.

‘’I fervently hope that with the availability of the conducive administration centre, facilities and operations infrastructure, the domestic and global operations and numerous training involving bilateral, multilateral and even multinational participations can be handled more systematically and resolutely.

‘’The operations of the MAB must be capable of becoming an example and excellence benchmark not only to the three branches of service but also to outside organisa­­tions and armed forces of other nations,” he added. – Bernama