Fahmi (right) meeting Hussin when launching a new lift at one of the Putra Ria Apartment blocks.

RESIDENTS of Putra Ria Apartment in Bangsar can now heave a sigh of relief with the installation of new lifts at each of the three apartment blocks.

There are 220 units across 22 floors in each block of the 20-year-old apartments.

He said the project to replace the lifts started in April last year and took 13 months to complete, including test runs after the installation.

DBKL had spent over RM6mil for maintenance and upgrading work at Putra Ria Apartment since it was completed in 1998.

Fahmi urged residents to take care of the common amenities at their apartments to ensure everyone could live comfortably.

“One of the problems here is poor collection of maintenance fees, it used to be only 30%,” he said.

“But I was told it had improved since MN Associates was appointed as the management agent on a two-year basis since December last year.”

Fahmi said he would work with DBKL and the Commissioner of Buildings to engage Joint Management Bodies (JMB) and Management Committees (MC) to educate residents on their responsibilities as strata owners.

He said they needed to change the residents’ mindset on the importance of paying maintenance fees.

“We want to inculcate awareness among the residents about their responsibilities and relationship with JMB or MC.

“This is important before Kuala Lumpur implements the parcel rent billing for strata properties next year,” he said.

Fahmi said other issues at Putra Ria Apartments that needed addressing were the “rubbish centres” located outside that posed hygiene concerns, and large number of foreign workers living in the apartments.

Putra Ria Apartment Residents Association chairman Hussin Ahmad said they were happy with the new lifts as they had to put up with faulty ones for years.

“It was especially bad for the past three to five years. Sometimes all three lifts in a single block malfunctioned, so it was extremely inconvenient and difficult for us to move around.

“It was worse for the elderly and the disabled or when there was an emergency,” he said, adding that he would also urge the residents to maintain the lifts.

“The cleanliness of our apartments has improved since MN Associates came in, as well as the collection rate for maintenance fees.

“We are looking into improving the safety aspects of our apartments next, including the gate grilles and steps,” he said. 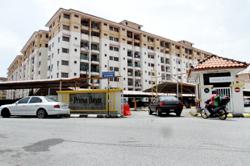