Wake-up call: The floods that hit Penang in 2017 exposed its lack of flood mitigation and disaster preparedness.

TECHNICIAN Cheong Jia Jian found himself in a messy situation when a massive flash flood hit George Town after a heavy downpour in November 2017.

The 21-year-old was a volunteer with the Community Emergency Rescue Team (CERT) George Town, which was responsible for providing aid during flash floods.

“Honestly, I was not even sure how to react properly at that time as most of us at CERT were not prepared to handle such massive disruptions,” he said.

“The situation was very chaotic, we had a high volume of distressed calls from people in different areas.

“And when all the volunteers were dispatched, we found that we could not send help quickly as the flood was really bad and there were traffic jams everywhere,” he recalled.

Cheong was among the 80 participants of a two-day Community Response Team Training and Disaster Simulation Exercise workshop at the Lam Wah Ee hospital’s nursing college auditorium in George Town recently.

Participants underwent comprehensive training on how to assist the community in situations of distress and simulation exercises including disaster assessment, first intervention response and support, and psychological first aid. 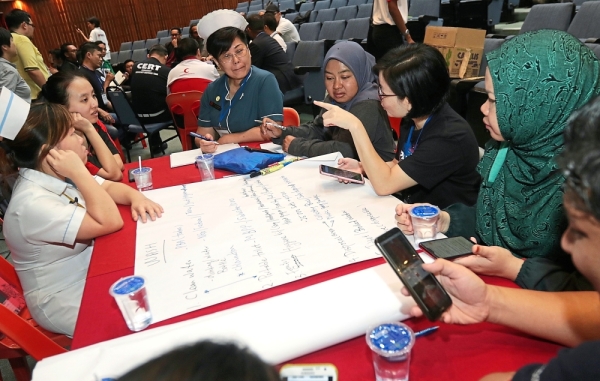 Hospitals are the first place that people go to in the event of a disaster, so it is critical for hospitals and medical personnel to always be prepared for disasters.

Cheong feels workshops like this are much needed, especially for first responders in the community as they them how to handle disaster situations.

“Back during the 2017 floods, the CERT George Town volunteers were equipped with first aid knowledge and we were well-trained as first responders,” he noted.

“But it does not matter how trained you are, first responders have to always be prepared to handle new experiences during disasters as there are bound to be unexpected disruptions.

“This workshop has taught me more than how to react in disasters, it also taught me how to be psychologically ready.”

For senior nurse Julie Vatz, 49, the workshop helped to expose medical personnel with routine-based work in a hospital setting like her to serious and urgent emergency situations.

“I was honestly surprised by the amount of work and challenges, physically and emotionally, that first responders will have to take on when a disaster occurs.

“So this training has really helped me a lot, in terms of teaching me that we as people in a community should be more altruistic,” she said.

“The simulation exercises were also good exposure for those of us who are used to attending to patients one-to-one in a controlled setting in the hospital to learn how to attend to a lot of people in major emergency situations.”

“Hospitals are the first place that people go to in the event of a disaster. Thus it is critical for hospitals and medical personnel to always be prepared for disasters, because they are akin to beacons of hope for people in pain or suffering,” he said.

Concurring, Penang Health Committee chairman Dr Afif Bahardin said the floods which hit Penang in 2017 were a “wake up call” for flood mitigation and disaster preparedness in the state.

“I am sure we all remember how bad the floods were, as we were totally not prepared.

“I remember many residents had to flee their homes and after we had allocated them to the few centres, we had no food and blankets for them,” he said, adding that aid only flowed in after 24 hours, which they could have managed better with preparations.

“So now, with efforts by various bodies for the workshop, we hope we can be better equipped to handle these situations in future.”

“Being a hospital, we have to be prepared to provide temporary shelter for the people in the event of disasters and unwanted incidents.

“We would also be the first responders to members of the community and therefore we need to be resilient and prepare for times like these.

“In the future, we hope to strengthen collaborations with different bodies and organisations to provide support to the community hand-in-hand,” he added.