New Shah Alam bus terminal to begin operations on May 1

THE new Shah Alam intercity bus terminal in Section 17 will be operational by midnight tomorrow.

“Police will be on hand to ensure that traffic is managed smoothly,” he said during the Shah Alam City Council full board meeting.

It was earlier reported that Terminal 17 in Jalan Jenulung 17/21 was expected to begin operations in July last year but it had been delayed for almost a year due to technical reasons.

The total cost of the terminal was RM8.4mil and the operating system and centralised ticketing system installed is similar to the one at Terminal Bersepadu Selatan in Bandar Tasik Selatan.

Mohd Rashidi said passengers can buy tickets from all 41 bus companies at each of the 10 counters provided.

“Customers can also buy their tickets online to eliminate touts.”

He added that phase two of the project would include the building of 30 food stalls and a multi-level parking facility. Work is expected to start by the end of the year. Unhappy over demolition of structures 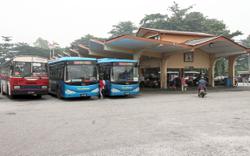