DIVERSE works of contemporary art were recognised in the Penang Art Open 2018 organised by the Penang State Museum.

Out of 78 submissions from 70 local and international participants, four were awarded minor prizes while six received consolation prizes.

These, along with 27 other shortlisted works, are now on display in an exhibition at the museum at 57, Macalister Road.

“Creative processes are changing. Artists today should not merely translate or transfer something they see but interpret and understand it.

“This results in the audience being able to relate to the works as they can see beyond what meets the eye,” he said during the competition’s prize presentation ceremony. Seri Delima assemblyman Syerleena Abdul Rashid, the guest of honour, sees the annual contest as vital in elevating the standard of visual arts while cultivating better art appreciation among the public.

“The state government must not neglect arts and music. Our country will not run out of artistic talents as long as they have platforms to shine,” she said in her speech. Among the consolation prize winners were Husin Othman for a charcoal and acrylic on canvas painting titled ‘Kami’, Izzardzafli Padzil for a pen on paper work called ‘Teri Trio’ and Mohamad Sazri Russalan Zulkenan for a mixed media piece labelled ‘Dialog Bumi’.

Rounding off the list were Rahmi Bujang for his ‘Hijrah’ ceramic and mixed media sculpture, Sahtic Kumar for ‘Golden Journey’ made with aerosol paint on a car hood and Syahrul Niza Ahmad Zani for a digital photo print with epoxen resin titled ‘Escape from the City #1’. 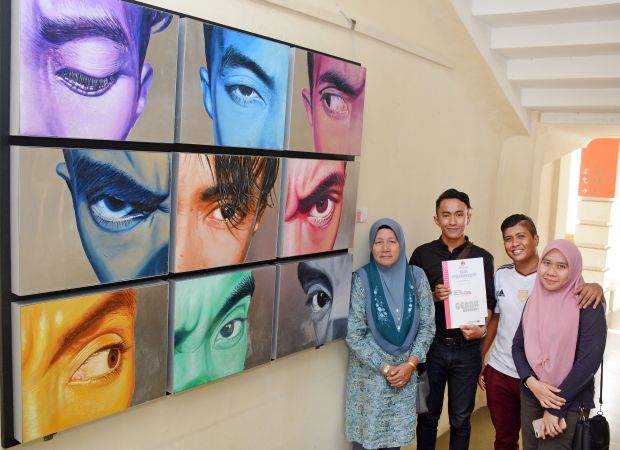 Besides Malaysia, there were also participants from the United States, Japan, Finland and Russia.

Museum personnel announced ‘Big’ as the theme for the Penang Art Open 2019. Entry forms will be available from March.

The exhibition for the 2018 works continues until the end of February.

Viewing hours are 9am to 5pm daily.