Poh posing with a painting titled ‘A Walk in the Park’ at his solo exhibition at Daiichi Art Space in Argyll Road. — Photos: LIM BENG TATT/The Star.

He has visited the state for holidays more times than he can remember, and feels happy every time he takes in its sights.

These experiences inspired his latest series of modern Chinese ink and colour on paper and abstract acrylic on canvas paintings.

They are currently on display at his solo exhibition aptly titled ‘Island in the Sun’ at Daiichi Modern Art Gallery in Argyll Road.

“I come to Penang several times a year and even spent part of my honeymoon here. It offers the best of both worlds.

“One can experience the heritage and culture in the old city and see beautiful natural environments just outside it.

“It’s a lively and happy place just like the place described in the song ‘Island in the Sun’,” said the 70-year-old painter at the show’s opening.

Poh, who was an art educator and postage stamp designer, revealed that he started out like many artists, painting what he saw in a photographic style.

But over time, he moved into abstraction as he sought to express more spiritual and philosophical ideas and concepts.

‘Rich Forest’ (above) and ‘Heritage’ (below) are two of Poh’s ink and colour on paper pieces.

He never starts out with a preset notion of what a painting will look like as that would be restrictive. Rather, he lets an idea take shape organically.

“As you grow, you tend to be more introspective. I wanted my works to be more thought-provoking so viewers can develop emotional and mental connections.

“I want them to feel, think and perhaps draw their own conclusions,” shared the self-taught artist.

As he also enjoyed dabbling in Chinese calligraphy, his ink works came about naturally, though they are done with a more Western technique.

“They are semi-abstract and feature lots of horizontal and vertical lines that reflect my belief in balance and equilibrium,” said Poh, who also hopes more people would develop an appreciation for abstract art. 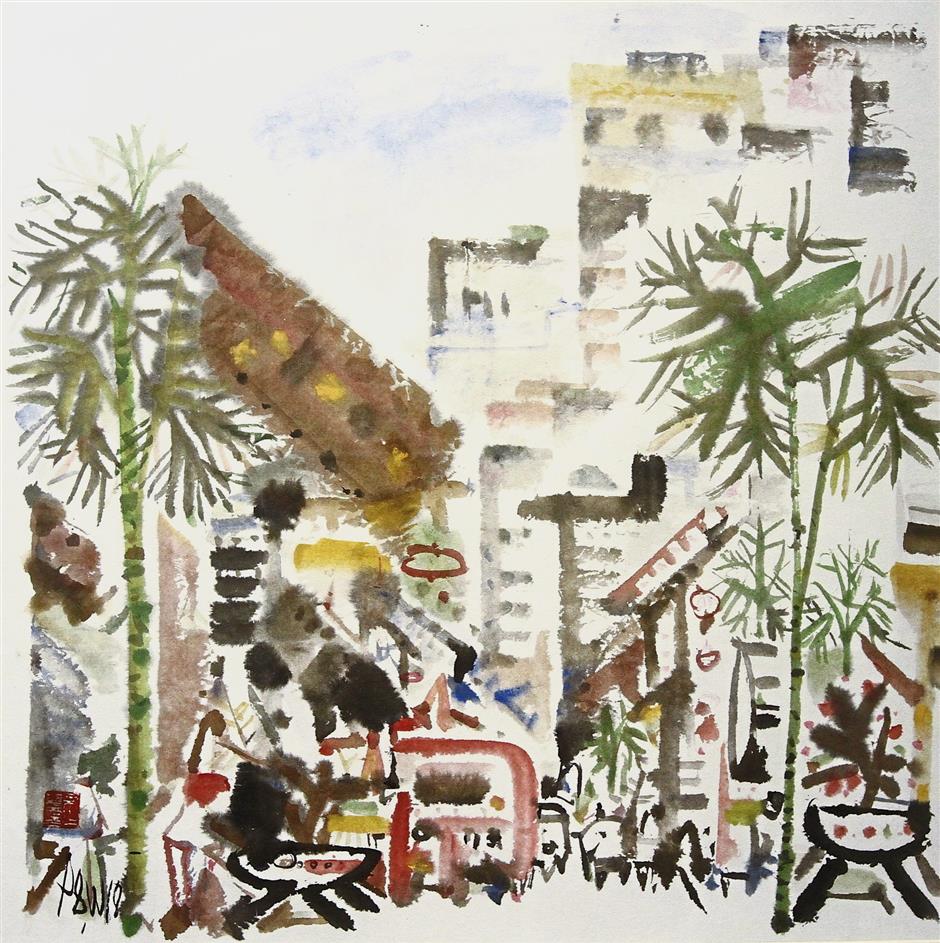 This is Poh’s first solo exhibition in Malaysia and the second outside of Singapore, with the other being in Flensburg, Germany, back in 1995.

However, he has featured in over 70 group shows internationally, including Thailand, Indonesia, China, Germany, Japan, France, the Philippines, Macau, Vietnam, India and South Korea.

Many of his pieces are in private and public collections.

The ‘Island in the Sun’ exhibition was opened by Penang State Art Gallery chairman Lee Khai. It continues until Feb 24.

Viewing hours are 1pm to 6pm daily (except Mondays).

The gallery is located directly above sister establishment Arte Restaurant.