View of the GBSMayang in Bayan Baru, Penang yesterday. - Starpic by MUSTAFA AHMAD / The Star / 6 Dis 2018.

Its general manager Datuk Rosli Jaafar said the move was in line with the state’s master development plan in providing a conducive working environment to support talents worldwide.

He hoped more foreign companies would set up their hubs here and provide more high-paying jobs for the locals.

“We have improved the landscape of the building and its surroundings,” he said, adding that more parking spaces would be provided for the tenants and workers at the offices nearby.

In response to the growing needs of GBS industry, the state government, through its state investment arm PDC, spent RM10mil to refurbish the building in April last year.

“A two-storey building will be built next to PDC headquarters in Bayan Baru to cater to GBS companies early next year. 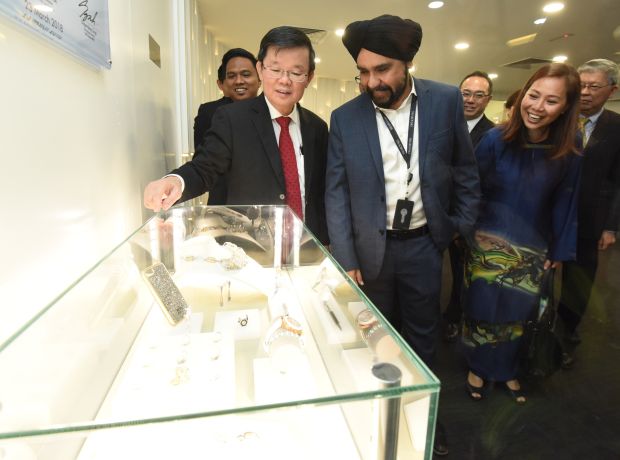 Chow (with red tie) checking out some Swarovski products on display during a visit to the company at GBS@Mayang. With him is the company’s managing director Gagandeep Singh (on his left).

The award is given to nice business locations that meet MSC Malaysia standards and criteria to deliver the MSC Malaysia Bill of Guarantees to MSC Malaysia-status companies.

Chief Minister Chow Kon Yeow, who was also present, said the state government would review the market’s needs in order to expand the GBS industry or build more GBS centre.

He said the state hosted over 50 GBS companies and provided more than 10,000 high-income jobs for knowledge workers and high-skilled workers serving both the regional and global markets.

“To create higher-value jobs, it is vital to provide MSC status facilities.

“This is in line with the second thrust of the Penang 2030 – upgrade the economy to raise household incomes,” said Chow, adding that Penang received an investment value of RM41.bil, the second largest investments for Global Establishments for Services or Principal Hub after Kuala Lumpur.

Chow said there were about 125,000sq ft of MSC Malaysia Cybercentre office space available after the upgrading at GBS@Mayang.

“Four global companies – Jabil, Swarovski, Cerium and Tesla are already operating here,” he said, adding that more than 80% of the building was occupied.