Home renovations and extensions are common but not all work carried out has MPSJ’s approval. Photo shows a comparison of houses that had been renovated compared to the original design in the PJS 7 area. — FAIHAN GHANI/The Star

THE deadline for the Subang Jaya Municipal Council (MPSJ) programme on legalising illegal home renovations or extensions has been extended to Dec 31.

The programme which began in August 2016 was to end on Aug 31 but has been extended following requests from houseowners.

MPSJ said there were no plans to continue the programme after the deadline.

The programme’s aim is to legalise houses that underwent renovations or extensions without approval; homes with MPSJ’s approval but deviated from the original plan as well as premises with approval but yet to receive Certificate of Completion and Compliance (CCC). To date, the council has received 3,600 applications and is still processing applications.

MPSJ Building Department director Nor Azmi Mohd Rosli said the idea was not to penalise but to legalise.

Nor Azmi advised residents to follow through the programme until they had the CCC in hand. The same guidelines will apply after the deadline but penalties will revert to the original compound of up to RM12,500, which is nine times the processing fee.

Under the programme, applicants pay a flat rate of RM500, and the processing fee is dependent on the size of area extended.

Purpose of the programme

MPSJ handed out 85,000 awareness notice, set up banners, and opened up booths at community engagement events to notify residents of the programme.

“It is not uncommon to find houses with an extended ground floor or renovations to add an extra room on top. Some went as far as to add another floor to their home.

With the increase in property prices, houseowners found it difficult to invest in a bigger house so extending or renovating the home to accommodate a growing family was the next best option.

However, extension projects required approval from the local council which many residents did not follow through. 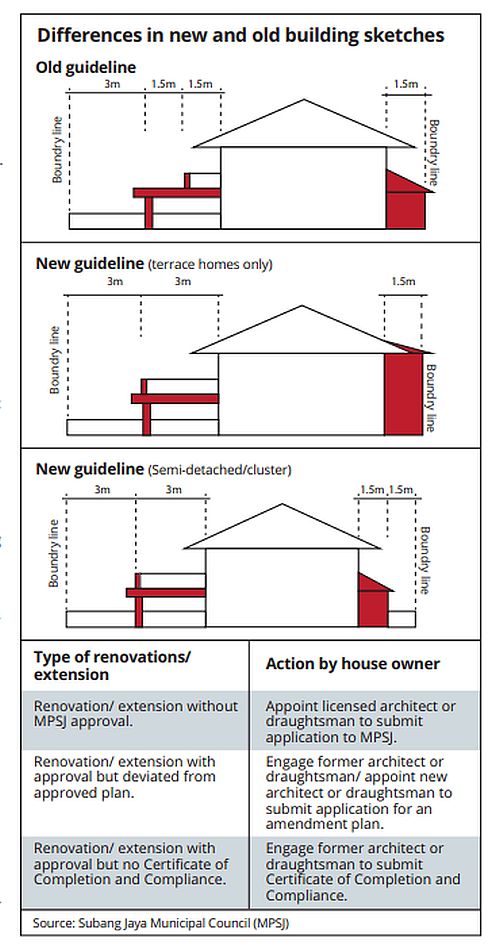 Before the programme was implemented, Nor Azmi said the enforcement team tackled many cases of home renovations that did not meet MPSJ’s building guidelines.

“We submitted a paper to the state government on this, and with the state’s approval, amendments were made to the bylaw.

“The programme was then introduced and announced to ratepayers on the changes made,” he said.

The amended guideline now allows balcony extensions to the front up to 3m (10ft) and 1.5m (5ft) for back extensions. The programme, as of December 2017, was extended to include semi-detached houses and bungalows.

Owners of such homes can extend the back of their homes with a setback of 1.5m (5ft) if there is a back lane.

Going through the process

Those wanting to apply for building plan approvals and obtain a CCC must consult a licensed architect or draughtsman to act as the principal submitting person (PSP). Property owners can engage any licensed PSP or select one from the list on the council’s website.

The PSP will submit building plans and forms necessary for council’s approval.

Once approved, penalty must be paid and the PSP can obtain the CCC. The council will also conduct a site visit to confirm the CCC.

Azmi said the entire process could take at least one month but it was dependent on the PSP engaged.

He said the consultant hired must submit an online application with necessary documents before visiting MPSJ’s building department for processing.

Payments, consultation and submission are all done at the building department’s plan and permit counter on the third floor of MPSJ.

Houseowners who deviated from the plan must also engage a PSP to submit an application for an amended plan. As for those who have yet to receive the CCC, they must consult their former PSP to secure it.

Chang said he did not hear of any problems from residents and most were willing to comply.

In 2016, Chang wrote in The Star that with the MP and assemblyman’s intervention, numerous technical meetings were held with MPSJ, lawmakers and relevant state departments on legalising illegal home extensions.

He said the new renovation guidelines were approved by the State Planning Committee on Dec 15, 2015.

Chang said it was worth investing in the legalisation drive because the house’s current value would have exceeded its original purchase price. He said banks and financial institutions would require the CCC when granting housing loans and when seeking valuation from panel valuers.

Insurance companies, he said, would not pay compensation in the event of a fire if an extension was illegal.