A day seared in their memory

The majority of the country’s present population did not have the chance to witness the historic moment of Merdeka.

To get a feel of the overwhelming Merdeka mood then and a better understanding of its significance, StarMetro spoke to three veterans who shared their accounts of the unforgettable day.

Born in Beruas, Perak, Toh Puan Umasundari Sambanthan, 89, was married to the late Tun VT Sambanthan when she was 27 and it was a year before Merdeka in 1957.

She said prior to independence, Malaya was just a piece of land for agriculture to the British but the challenge for the founding fathers was to build a nation.

“The challenge was to achieve nationhood,” said Umasundari, who has a degree in Chemistry. Umasundari says the joy and exhilaration of the moment the country achieved independence was indescribable.

Sambanthan and his wife lived in government quarters in the then Jalan Guillemard (now Jalan Ledang), Kuala Lumpur, that year.

“We had a black Mercedes with the number plate AB57 chosen for Merdeka year and were driven to the Selangor Club Padang (now called Dataran Merdeka) on the night of Aug 30.

“It was the Merdeka celebration held at Stadium Merdeka that brought the nation together on the morning of Aug 31.

“We rejoiced at the moment. If Stadium Merdeka had not been built by Tunku, we would not have had that spot to celebrate the birth of our nation” she said.

Umasundari said, based on her memory, the title Bapa Kemerdekaan was given to Tunku by Umno Youth which was then headed by Sardon Jubir (later Tun) before the British flag came down and the Malayan flag was raised to the national anthem at midnight.

“The joy and exhilaration of that moment was indescribable and I feel the same joy every time I hear the Negaraku. It also made us aware of our duty to the citizens of Malaya,” she said.

She also spoke of her husband’s practice of wearing traditional dress – the dhoti and jibba - in public office.

After winning the 1955 Legislative Council elections in 1955, Tunku was asked by an English daily what he would wear for his first courtesy call on the British High Commissioner at his residence known as “the King’s House”.

“The next day the daily ran a news story criticising the ‘Indian minister’ for wearing the kacang putih seller’s dress to the King’s House?” said Umasundari.

“My husband then said the Indian attire was what he wore to meet the people of this country, it was good enough to be worn to Parliament,” she recalled.

She still remembers how meticulous Sambanthan and the other leaders were at work.

“He would bring along his camera when he was the health minister (his second portfolio) and snapped pictures to highlight the problems more effectively to ministry officers,” said Umasundari.

She said Sambanthan placed great importance in improving the lives of others and often did the work during his spare time, on top of his ministerial duties.

One of the many examples was the founding of a cooperative for estate workers.

“The national leaders had such high accountability and this I saw in all of them. I think their main motivation was their love for the people and the country”.

He had packed his bags and was set to board a ship to London at Swettenham Pier, Penang.

It was at the shipyard that Tun Michael Chen, then 25, first heard the word “Merdeka” proclaimed by Tunku Abdul Rahman for seven times through the radio.

“I was already in Penang on Aug 31 and I was going to London to study law with my hard-earned cash of RM2,000. “I had never heard the word Merdeka before but there was excitement in the air,” the former MCA deputy president recalled. There was a lot of newspaper coverage leading up to independence. He was one of those following the news voraciously.

Chen, 86, lived through the good and bad times of the nation before Merdeka.

As 11, he saw the cruelty the Japanese inflicted on local women in his village, Chenderiang, Perak.

“Girls smeared their faces with mud and dye to avoid getting noticed,” he said.

He also stopped schooling during the Japanese Occupation although he enjoyed learning.

“I did not want to bow to the Japanese, so my dad and I decided that I should stop schooling and help him with farming instead,” he said.

Driven by circumstances, children during his time matured fast, he added.

“Life was really tough. I was in charge of taking care of 50 pigs, 50 ducks and a mining pool full of fishes. It was my job to find the right food for the animals, there was no manual and one just had to try not to make errors.

“But I loved my dad a lot. I saw how he carried out back-breaking work under the hot sun at the farm. I was obedient because of that,” he said.

His father was also imprisoned and tortured by the Japanese due to false information.

“When people today say life is hard, I say please-lah, you have no idea what it was before Merdeka,” he said.

Having visited 300 cities and 60 countries, Chen said he loved only Malaysia.

“Malaysia has done very well in the past 61 years and there is a lot of goodwill. Although some people think they can do a better job,” he said. 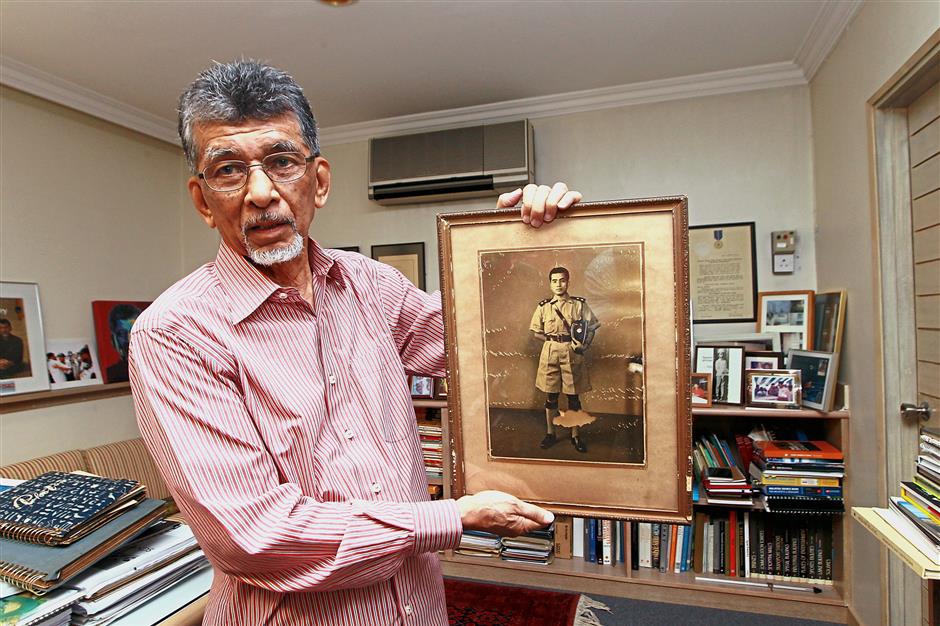 Hajeedar holding a portrait of his father Abdul Majid Ismail who was the liaison officer with the Reid Commission in 1956.

Dauk Hajeedar Abdul Majid was just 12 when he sat in the crowd with his sister and friends, listening attentively to Tunku’s proclamation of independence at Stadium Merdeka.

His oldest sister, late Siti Majhar Abdul Majid, even performed at the occasion.

“My second sister sat with her classmates and I sat with my friends from Pasar Road Primary School, we enjoyed watching the army and navy march-past,” said Hajeedar, 73, a famous architect.

His father Abdul Majid Ismail was the liaison officer with the Reid Commission in 1956, which paved the way for the approval of Federal Constitution on Aug 27, 1957.

He was an inquisitive child who used to hop into his father’s Hillman Minx and followed him to work at Carcosa Seri Negara for about a year before Merdeka.

“I would watch my dad arrange the tables but I did not know what was happening.

“Only later in life I found out that the meetings my dad was setting the place for the Reid Commission’s meetings.

“I also found out that my dad was chosen because he was fluent in English, Malay, Tamil and spoke the local Chinese dialect,” he said.

On the morning of Merdeka, his father dropped him and his sister at the stadium at 5.30am.

“There was a slight drizzle but my father had to rush to Istana Negara to accompany the first Yang di-Pertuan Agong Tuanku Abdul Rahman Tuanku Muhammad to Stadium Merdeka for the ceremony as the aide-de-camp,” he said.

Hajeedar said growing up he was told that his maternal grandfather and uncle were killed during the Japanese Occupation.

“My grandfather was a religious teacher and he had some rice given by his students as a token, but he and his son were killed because they refused to give the Japanese the rice,” he said.

Hajeedar said the nation, since independence, had experienced the good and the bad.

“Just like an illness, it is important to have short, medium and long-term remedy.

“Don’t rush judgements. Even a human takes nine months to form. So make rational decision and always be patient,” he said.