From Brownie to nation’s top ’Guide’

Left: The associations new chief commissioner has many duties include chairing workshops to train association members to become leaders.

IN PRIMARY school, Datuk Jeyadhevi Subramaniam often looked up to her seniors who were part of a movement called the Girl Guides.

Clad in their smart uniforms – brown frock and yellow tie (the uniform of junior guides or Brownies in the 1960s) – the girls were in a class of their own.

Inspired by this self-assured group of girls, Jeyadhevi joined the Brownies when she turned 11, but little did she imagine that she would one day play an important role in the Girl Guides movement in Malaysia.

The newly elected Girl Guides Association Malaysia chief commissioner fondly remembers her days as a Brownie at SK Undang Rembau in Rembau, Negri Sembilan back in the 1960s.

“Besides enjoying the camaraderie during camping trips and jamborees, we learnt essential skills like cooking and sewing.

“The first badge I earned was a collector’s badge, which I received for my collection of stamps and coins,” she reminisced. Jeyadhevi has played a pivotal role in the development of girl guiding in Malaysia and has received a string of state, national and international awards for her efforts.

Moving up the ranks from Brownie to Girl Guide, Jeyadhevi earned badges for the practical skills she learnt along the way such as hostessing and cooking.

“Now, new badges are awarded for a multitude of skills and abilities from mindfulness to photography, which reflect the varied interests of girls and young women today.

“These badges help Brownies and Girl Guides develop their talents, and gives them the confidence to take on new challenges,” she said.

In 1968 and at the age of 17, Jeyadhevi received the prestigious Queen’s Guide Award, which is conferred to Girl Guides who demonstrate exemplary leadership skills.

“Becoming a Queen’s Guide was such an honour, especially back then when it was given out to just a select few.

“I was the first from my school to become a Queen’s Guide.”

Over the years, the retired headmistress has played a pivotal role in the development of girl guiding in Malaysia and has received a string of state, national and international awards for her efforts.

In 2008, Jeyadhevi led a team of Girl Guides from Negri Sembilan, and they were conferred the World Association of Girl Guides and Girl Scouts (WAGGGS) Olave Award – an honour awarded every three years at the WAGGGS World Conference – to Girl Guides in recognition of their spirit of service and for creating positive change in their community. Jeyadhevi (standing, left) and her fellow Girl Guides after winning a state-level gadget competition in 1967.

As the chief commissioner for the 2018 to 2023 term, Jeyadhevi oversees 18 chapters of the association and more than 130,000 Girl Guides nationwide.

With its emphasis on empowering girls and young women, the association’s Malaysian chapter is looking at several pressing issues including child marriages.

“The Girl Guides Association of Malaysia is the largest organisation for girls and young women in the country.

“One of my key areas of focus as chief commissioner is to revamp our education programmes.

“We are working together with Universiti Malaysia Sabah to createa survey aimed at girls and young women in rural communities nationwide.

We want to hear about the issues they face so that we can structure programmes that are relevant,” she said.

Jeyadhevi, who received the Tokoh Guru Negri Sembilan award in 2015, firmly believes the Girl Guides helped mould her character and set the foundation for her success as a teacher and hockey coach.

“The Girl Guides made me the well-rounded individual I am today. Our programmes help girls and young women develop their full potential as leaders and be agents of positive change in the world.

“I always encourage women who were active Girl Guides in their younger days to volunteer their time and efforts for the benefit of the next generation. Once a Girl Guide, always a Girl Guide,” she said. 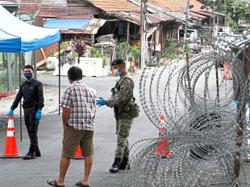