Perak is No 2 for local tourists

A TOTAL of 7.6 million domestic tourists visited Perak last year, placing the state second after Pahang in a survey on local tourism carried out by the Statistics Department.

Perak Tourism, Arts and Cultural Committee Chairman Tan Kar Hing (pic below) said this was a 5.7% increase compared to 2016, where some 7.2 million people visited the state.

He said the Visit Perak Year 2017 campaign was the main factor for the rise in domestic-tourist arrivals.

Tan said there was also an increase in the arrivals of day-trip visitors to the state from 9.58 million to 12.47 million in 2017 compared to the year before.

“Alongside events on the state’s tourism calendar, new tourism products like the Movie Animation Park Studios (MAPS), Funtasy House, and Balai Gambang were among the things that drew more visitors to the state.

“We will continue to enhance our tourism products to make sure more people visit the state this year,” he told a press conference at the State Secretariat building last Thursday. Tan added that Tourism Perak has been promoting the state through Visit Perak campaigns since 2012, an effort that has since been emulated bythree other states.

He said it is good to have a healthy competition and the state government will continue to ensure promotions are enhanced at all levels.

“We are also already planning the events to be held over the next few months in conjunction with Merdeka Day, and Hari Malaysia.

“Basically the annual ‘Ambang Merdeka’ event will be held in Ipoh, and we are looking at celebrating the main Hari Malaysia Day event outside of the city.

“We will be able to finalise where the events will be held within a week or two,” he added.

Tan said, in the weeks around Merdeka and Malaysia Day, several interesting events will be held, especially at night, to attract more people to visit the state.

He said currently people often visit Ipoh for day trips, as there are few attractions in the evenings.

“We hope to have something that will make people want to stay longer than a day, especially during the weekends.

“We have plans to construct stages for performances in selected locations,” he revealed.

When asked about the Keretapi Tanah Melayu Bhd’s (KTMB) plans to revive the Majestic Station Hotel, he said the state government will be holding discussions with the Railway Assets Corporation (RAC) today. 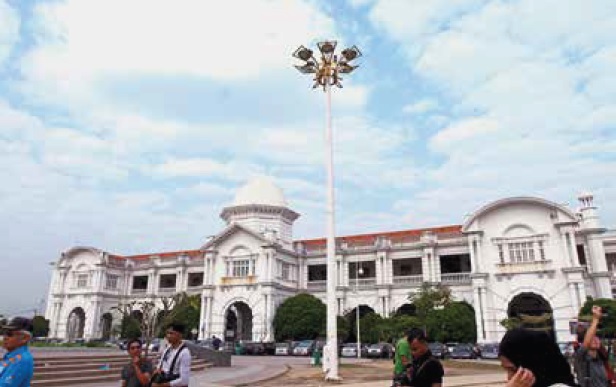 He said the meeting will not only discuss the station hotel (above), but also developing several other assets belonging to RAC in the state with tourism potential.

“Several assets such as the Victoria Bridge, and staff quarters can be upgraded as tourism products. We will see the plans proposed by RAC, and from there we will see how best we are able to go about it,” he added.

Asked if he plans to tourism events tied to the Sukma games taking place in Perak this September, Tan said he is already working closely with the state executive councillor in charge of sports to see how such events can be co-organised.

“I am sure prior to the event, athletes, coaches and teachers will be around during the training sessions, and we are looking into what sort of supporting events involving youths can be carried out.

“Maybe events concerning crafts, forums, and talks will be held,” he added.