Even Sister Enda, then a teenager, was inclined to believe they could be right. However, 70 years later, she’s proved them and herself wrong.

Surrounded by former students and teachers of SMK Assunta – the school she founded, members of the clergy and fellow Franciscan Missionaries of Mary (FMM), the Irish community, friends and even family – grandnephew Cillian Christie, Sister Enda, who was propped up by a walking stick, bellowed with laughter, burst into song many times and celebrated her platinum anniversary of religious life at her beloved Assunta in Petaling Jaya.

“That’s how she likes a party, celebrating with family and friends.

“That’s her gift. So full of life and zeal, and to share the joy with others around her,” Archbishop of Kuala Lumpur Rev Julian Leow said of Sister Enda at the mass attended by Malaysian Cardinal of the Roman Catholic Church Anthony Soter Fernandez and celebrated by Father Alvin Ho, whose aunt was a teacher at the school, to mark the occasion.

“She has spent her life in service and giving, and it has borne fruit. This is the proof,” he added, pointing to the room full of her admirers.

Sister Enda joined the FMM in Loughglynn, Ireland, on March 19, 1948. She left her homeland on a missionary dispensation knowing she may never go back. She arrived in Malaya in 1955, aged 27. The very next day she began her pioneering work.

As principal of SMK Assunta, a position she held for 32 years before retiring in 1988, she nurtured the future of a lineage of school girls who, emboldened by her inspiration and values, have gone on to be leaders themselves, captains of industry and humanitarians.

Sister Enda built a legacy that has stood for 60 years. Over 100 well-wishers attended the celebration with a mass followed by a lunch held at the school hall. Those who could not attend, like Sister Enda’s family in Ireland, sent video messages with cheers and greetings to their dear “Aunty Meena”.

The lunch, prepared by the school’s long-serving canteen operator, was interlaced with entertainment that was decidedly Irish courtesy of St Patrick’s Society, and of course loads of singing led by Sister Enda.

During the early days of Assunta, Sister Enda used to sing to pay for the school’s electricity bills, which is how the moniker the “singing nun” emerged.

The admiration and respect Sister Enda commands was evident during the celebration as the accolades came pouring in from Irish ambassador Eamon Hickey to Assunta’s first head girl Nesamalar Chitravelu, who in her speech said, “We are what we are because of you. You have enlarged our hearts and minds.” Rev Leow walking with Sister Enda to lunch at the school hall as she celebrates her 70th year of religious life.

“I didn’t realise how popular she was until I saw floods of people come up to speak to her about everything or ask for advice, and to take part in this or that. She seems to be very popular,” said 21-year-old Christie from Ireland.

Sister Enda too was touched by the gestures. “It is very humbling to get all this and to soak it all in,” she said of the celebration.

“All these people coming and the hierarchy, you feel so unworthy and undeserving.”

While Sister Enda remains decidedly humble, the sprightly nun who will turn 90 in December beamed with pride at the fuss made over her.

Hers were not the only Irish eyes that were smiling that day, the infectious joy of the occasion was felt all around. 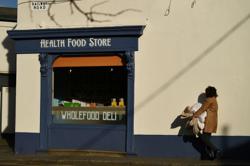