Enthusiastic volunteers abound in this GE

Shyam writing down a list of polling stations in Ampang to be pasted on her car windscreen.

THE 14TH general election is upon us and it is yet another occasion where Malaysians show their can-do spirit with their initiative.

Some of them have been volunteering in elections after elections.

StarMetro caught up with three such volunteers to find out what motivates them.

Shyam Priah Marimuthu, 43, has helped over 70 random people, mostly the elderly, to commute to the polling stations in her Perodua Kelisa for free since GE12.

She is more excited this year as she has a seven-seater Toyota Unser that she bought second- hand, to ferry more voters to polling stations within Ampang, Selangor.

It was an eye-opening moment when Shyam travelled from Bangsar to Ampang in the morning to cast her vote for GE12.

On the way, she saw an elderly woman, who turned out to be her former neighbour, waiting for public transport to head to the polling station.

“It was my friend’s mother, so I gave her a lift and she told that she had been waiting for two hours but there were no buses to her destination in Ampang. 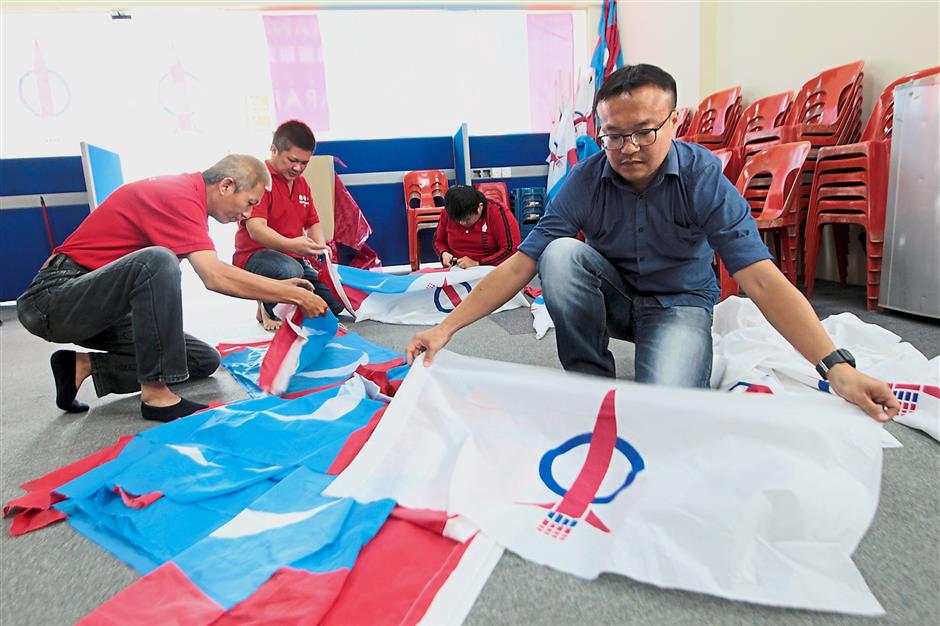 Yew (right) and other volunteers at the Kepong DAP operations room.

“After dropping her off, I decided to take a drive around town and help people trying to get to their polling stations.

“I called out from my car and said teksi percuma untuk mengundi (free taxi to go and vote),” she said.

For GE13, she was more organised and focused on those voting within the Ampang vicinity where she now resides.

Shyam transported about 40 voters in the previous elections. Her Proton Kelisa was adorned with the national flag and flags of various states.

The locations of polling stations in the constituency were pasted on her car window panels.

Just like the previous two elections, Shyam anticipates congestion near the polling stations this time.

She foresees the public transportation may not be able to drop passengers close to the polling stations due to the traffic congestion.

“This may cause inconvenience to the elderly and the disabled, which is what primarily motivates me to provide free rides.

“My priority are the elderly and the disabled, but I would help any Ampang resident who needs help getting to the designated venue to cast their vote,” said Shyam, who is not politically attached to any party.

“Voting is a person’s fundamental right and I want to help them fulfil their rights.

“I hope others will do the same in their respective areas. Chan (seated left) has been a polling agent and worked behind the scene wearing different hats. Here he is guiding younger volunteers in the elections process at the MCA operations room in SS3, Petaling Jaya.

“Try to carpool with your neighbours and avoid driving alone. If you can, offer to send your elderly or disabled neighbours too,” she said.

She recently bought a 12-year-old Toyota Unser and she hoped to help more voters this time.

“This is my way of giving back to my country. I believe every little gesture counts,” said Shyam, who would never ask her passengers who they were going to vote for.

“I will never talk politics while driving them. We chat about other things such as food.

“One makcik taught me how to make nasi kerabu while we were heading to her polling station,” she added.

Without fail since 1982, Dr Chan Boon Lye, 72, has been a polling agent and worked behind the scene wearing different hats.

The ardent MCA supporter is always happy to be the “physical labour” during election period. He has been tasked with various duties including obtaining police permit for the party’s ceramah (political talks).

Chan, who is a chemist, became an MCA member in 1975. He became actively involved in elections when his relative Yeoh Poh San became the MCA candidate for Petaling Jaya parliamentary constituency in 1982.

GE14 will be Chan’s ninth election and he is assisting the Damansara MCA with their manifesto, as a polling agent as well as helping at the service centre in the run-up to elections.

“My cousin was a lawyer and I decided to help him. I was not his strategic planner but more like a helper who went door to door to campaign. My cousin won the seat in the 1982 polls.

“I was also the polling and counting agent in 1982 and it was no easy job. We had to lift the disabled a few floors up to the voting room,

“There was a person who fell and injured himself and we had to send him to the clinic and foot the bill because he had no money to pay,” said Chan, who completed his degree in Universiti Malaya. In 1999 and 2004, he was roped in to assist former Kampung Tunku assemblyman Datuk Dr Wong Sai Hou.

“I was also the MCA liaison officer with the police and helped with the permit application for all the ceramah.

“When I was the polling agent in 1999, it was really stressful to make sure all the ballot boxes were properly sealed and transported from the polling hall to the counting centre. It is a highly stressful job because it is a huge responsibility.

“I am so glad the ballot boxes are now counted at the polling station itself,” said Chan, who received his PhD from Metropolitan University of North London on a scholarship from Malaysian Rubber Fund Board.

He admitted to being worried about unruly incidents outside polling centres and was thankful that the process had gone on smoothly every time.

He said that he supported MCA because he believed it was the only Chinese-based party that represented the community outside China and Taiwan.

He will once again be polling and counting agent officer in GE14 and will help train the younger MCA members in the elections process.

He will also be helping Damansara Barisan Nasional candidate with the election manifesto and other campaign-related work.

“I will always be an MCA supporter because I have seen how the party helped the community all these years.

“Parents who face difficulties with their children’s higher education will still come to the MCA office to seek assistance.

“The public ask for our help when they apply for BR1M. We helped many illiterate Chinese to fill up all the necessary documents and help them liaise with the land office for their land lease extension,” he noted.

At 17, most teenagers would have little interest in politics. However, Yew Jia Haur had some unforgettable and live-changing experiences when his late father Yew Swee Fong stood as a DAP candidate for Malim Nawar state seat in Perak in 1995.

Yew said during a morning walkabout to visit the constituency, a voter spat on his own hand and then shook hands with his father!

“I feel it is acceptable for people to vent their dissatisfaction or even scold candidates who are not aligned to them.

“However, it was disturbing when I saw a man doing that to my father who is older than him.

“I felt very sad and angry over such behaviour,” said Yew, 40.

Malim Nawar was his father’s hometown and he was no stranger there.

However, the support he received was lukewarm because he was with the opposition party and it was not easy in those days to find volunteers to help, said Yew.

“In the 1990s, volunteerism was something rarely practised.

“Most people expected some remuneration such as when they accompanied us to the market to distribute our campaign flyers.

“Some told us they will help us only from 9am to 5pm and then they will head to another party camp to help at night,” said Yew who has a degree in IT.

He recalled back then the worst blow came on the polling day when several other key volunteers went missing.

“Some of the key people who were helping my dad earlier went missing on polling day,” he said, adding that it was that moment that he himself was roped in as a polling agent.

“Since there was no one around, I had to walk into the hall and say I will become the polling agent.

“I was in my shorts and I will not forget that moment. I was only 17 but since no one protested, I was allowed to be the polling agent.

“I was given a short briefing on my duties as a polling agent and minutes later I was carrying out the job,” said Yew, adding that it was a desperate situation and that was probably why he was allowed to help his father.

His father lost in the elections but it spurred Yew’s motivation to become a volunteer for DAP, and he has been a polling agent in elections since 1995.

“I know the hardship my dad went through and this motivated me to become a volunteer. I offer to help in any way possible including doing physical work.

“I am mostly around the Kepong area because this is where I grew up.

“This GE will be my sixth time being a polling agent,” he added.