PETALING Jaya City Council (MBPJ) is expecting an increase in applications for its assessment tax rebate scheme this year, thanks to a rise in residential neighbourhoods that picked up the scheme last year.

“These include Bandar Utama, Sections 11 and 22, and the SS21 residential area,” he said.

He added that there were about 5,600 houses located across Bandar Utama 1 to 12.

“A briefing was done in October with Bandar Utama Residents Association.

“We briefed them on the mechanics of the waste separation and recycling programme, and worked out the collection schedule.

“New applicants have to provide at least three months of proof when applying for the green rebate scheme,” said Abdul Hakim. 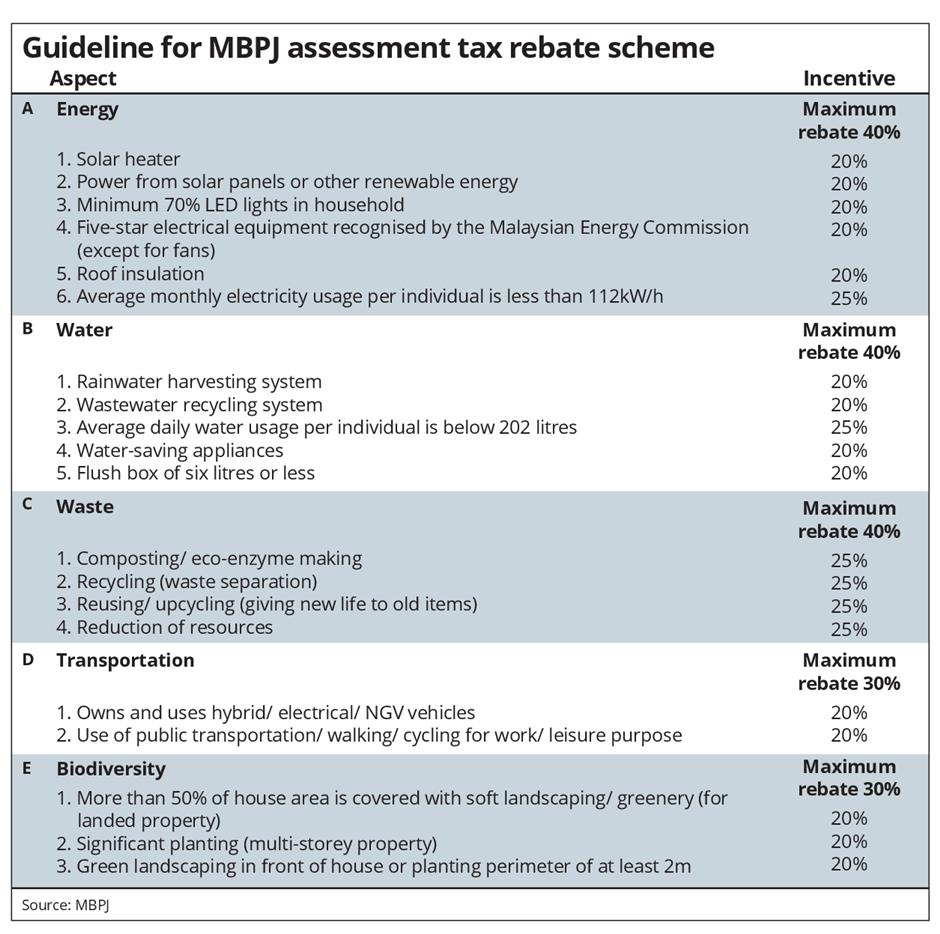 MBPJ’s assessment tax rebate scheme is offered to houseowners living in either landed or multi-storey residential properties, to encourage environmentally friendly and sustainable practices at home.

“The application covers new green initiatives that have never been evaluated, or eco-friendly components that had been assessed the previous year but underwent significant improvements the following year,” Abdul Hakim explained.

“The applicant has to be a houseowner living in their own home. They must not have tax arrears with MBPJ or there must not be any illegal extensions to their premises.

“Applications are limited to one house per year and approval subjected to recommendations by a panel of experts appointed by the city council.”

Applications must be submitted using the form provided by MBPJ, and include copies of electricity as well as water bills for the latest three months (to calculate carbon emission and utility consumption). Ramendra and Meera taking their household’s recyclable items to the condominium’s recycling bins.

The evaluation will be done by the department’s officers and selected experts. They will visit the applicants’ homes to verify the submissions including supporting documents.

The amount for the approved rebate will be credited into the houseowner’s account, or carried forward to the following year if assessment tax for the current year has been paid.

The maximum rebate awarded is 100% or RM500, whichever is lower for an individual house.

According to the department, the easiest and most common aspects to implement are energy, followed by water.

For example, houseowners can use energy-efficient electrical appliances such as refrigerators and washing machines with five-star rating, install solar panels to generate electricity and instal a rainwater harvesting or wastewater recycling system.

In addition, applicants are judged on equipment usage (such as separate containers for recycling), system implementation (how the green measures are carried out) and efficiency (whether the initiatives are built into the houseowners’ everyday habits). Water collected from Yeoh’s rainwater harvesting system is used to water plants and fill up the fish pond.

On why there were not many applicants for the green rebate scheme, Abdul Hakim attributed it to lack of publicity and need for behavioural change.

“There is a misconception that those who stay in high-rise buildings need space and money to implement green initiatives.

“It does not have to cost a lot or require much space. It can be as easy as using energy-efficient electrical appliances and LED lighting, composting organic waste and recycling,” he said, adding that a family could have different members contribute to the scheme as long as they lived at the same address.

Abdul Hakim said MBPJ was trying to create greater awareness of the scheme by reaching out through social media and council events, as well as making an effort to help existing applicants improve their green initiatives.

“We are planning to create a ‘train the trainer’ platform for experts and applicants to share their best practices and experiences,” he said.

Applications for this year’s scheme will be launched at the end of this month.

The application form will be made available by February at the department’s office at Level 20 of Menara MBPJ and via www.mbpj.gov.my

Submission deadline is June 30. For details, call 03-7954 1440 or email norhaizey@mbpj.gov.my or nurwahidah@mbpj.gov.my Yeoh Siew Kooi has a thriving garden in her home in Ara Damansara to feed her two passions — gardening and cooking.

“It is my way of passing time and keeping myself busy,” said the 73-year-old.

“I use the herbs and vegetables I grow in my cooking, or give them to church friends. Sometimes friends will drop by to request for a herb or vegetable they need.”

The retired teacher also recently installed beehives for stingless bees to pollinate her garden and to later extract their honey.

“I found out about the assessment tax rebate scheme from a neighbour and submitted my first application some years ago.

“My first submission was for the solar heater. I got a rebate of about RM300 from that,” she said, adding that the device was used to power the water heater.

Yeoh’s applications in subsequent years were for an energy-efficient refrigerator, composting and rainwater harvesting. Her next application is for landscaping and greenery.

“The harvested rainwater is used to water plants and fill up the fish pond. During the hot season, I also use wastewater from washing dishes to water the plants.

“The compost, made from garden and kitchen scraps, is used as fertiliser,” said the retiree.

Power usage at Yeoh’s bungalow is not high, as the only occupants are her and her husband. Both Yeoh and Hoh also carry out composting to get fertiliser for their gardens.

They do not use air-conditioners to cool their home, preferring natural ventilation and fans instead.

Yeoh said she embraced green habits as part of an everyday lifestyle.

“The application process for the scheme is easy, but my motivation is not for the money or rebate.

“My green habits are about me doing my part for a better environment, the rebate is just a bonus,” she said, adding that the scheme was a good initiative.

Josephine Ivy Gomez Hoh did not have to pay her assessment tax for two years, after her application for the scheme entitled her to a rebate for that period.

“I submitted my application in 2015 after finding out about it through the SS25A Rukun Tetangga group.

“A neighbour who had successfully applied for the scheme showed me how to do it,” said the 74-year-old, who is better known as Ivy Hoh to her friends.

“However, I was not aware that once I submitted for one aspect, I could not apply for the same one the following year.

“It would have been better for me to submit for rainwater harvesting the first year, composting the second year, and so on,” said the retired teacher who continues helping learning-challenged children.

The harvested rainwater is used to water her 60sq m garden and wash her porch floor. The composting bin was given by MBPJ to interested SS25A residents.

Hoh enjoys gardening as a hobby, and likes to have her breakfast and tea at her front porch facing her garden filled with ornamental, fruit and herb plants. “I plan to grow vegetables for cooking, as well as plant more fruit trees and herbs around the house perimeter. The edible plants I grow are for personal consumption,” said Hoh, who stays in a corner-lot terrace house.

She said the rebate scheme was a good initiative as it reduced the amount she needed to pay for her yearly assessment tax.

“The scheme also benefits the environment in the long run, as it encourages people to green their homes and reduce their carbon footprint,” she added.

Ramendra Loganathan’s family of five do what they can in terms of green habits and practices, despite the space limitations of living in a condominium.

“I got a full rebate for my first application in 2015. That submission covered energy and water consumption, plus recycling,” said the 40-year-old engineer, who found out about the scheme through the Tiara Kelana Condo Residents Association.

“My subsequent applications covered a balcony garden and a significant increase in recycling, then LED lighting and five-star rated electrical appliances.”

The balcony garden has plants such as curry leaves, pandan and pegaga (centella), which Ramendra’s wife, Meera Manickavasgar uses for her cooking.

The couple also encourage and educate their three daughters — aged between five and eight — to be environmentally friendly, such as using their own water bottles and food containers, and teaching them how to recycle.

A charity organisation will collect the recyclable materials, along with other used or pre-loved items such as old clothes, toys, books and electrical equipment to be sold or donated.

While the application process was easy to understand, Ramendra said more could be done to improve the scheme.

“MBPJ or the evaluators should provide feedback such as giving the rebate breakdown or advising if we are doing things correctly,” he said.

“For example, if I applied for a 20% incentive but only received 10%, MBPJ should explain why and how I can improve to get the full amount.

“I was also unsure if my application was approved, until I saw my discounted assessment tax bill the following year.”

He suggested that MBPJ consider a separate category for condominiums or high-rise buildings in the scheme.

“As space and infrastructure are an issue for us, we cannot apply for rebates under rainwater harvesting or solar panels. But there are certain things that an apartment owner can do individually and the condominium management implements as a group.

“For example, my condominium management is encouraging residents to green the area by assigning each block a plot of land and allowing residents to grow their own vegetables, herbs or flowers in these small gardens.

“The management could then apply for the scheme if there was a separate category for joint effort by a high-rise building,” he said.