The sitting Buddha in Kampung Jubakar is among the largest in the region. (Left) The standing Buddha at Wat Phikulthong in Kampung Terbok is 60m high. — Photos: SAZUKI EMBONG/The Star

TUMPAT, the smallest district in Kelantan, welcomes tourists from all over to its many attractions steeped in cultural and architectural splendour.

Although tiny in size, the district has 25 Buddhist temples dotting its landscape.

It boasts among the longest sleeping (reclining) Buddha, tallest standing Buddha and largest sitting Buddha in the region.

Unique feminine Buddha and picturesque young Buddha statues are also among the attractions here, as tourists and devotees come in droves to the northeastern tip of the Malay heartland to visit the iconic wats.

Tour guide Kuan Than Fatt, from Selangor, said it was worthwhile making the long journey to Tumpat.

“People are excited to see the magnificent statues and are impressed by the size,” he said.

But logistically, it is not possible to visit most of the main temples in one day, as they are scattered all over the 169.5sq km district.

The sitting Buddha in Kampung Jubakar is among the largest in the region.

“This is the first time I brought a tour group to visit the Buddhist temples in Tumpat, but we could only visit the temples with the tallest standing Buddha in the country and the 30m sitting Buddha.

“Unfortunately, we did not have the time to visit the most famous reclining Buddha, touted as among the largest in South-East Asia.

“But we managed to visit another temple boasting giant dragons in the nearby Bachok district before continuing our journey to Cameron Highlands,” he said.

Kuan, 54, said Tumpat could be a great tourist destination.

“The only setback is finding food to suit the palate of those not familiar with Kelantanese and Siamese dishes.

“If the food problem is resolved, I am sure the place will attract more visitors,” he added.

The reclining Buddha statue in Kampung Jambu, which measures 40m long, 11m high and 9m wide, was completed in 1979.

Apart from the sitting Buddha built by skilled craftsmen from Thailand, the other attraction at Wat Machimmaram is Yong.

“I tell fortune from 9am to 5pm. Sometimes there is a big crowd and other times, there are not many visitors,” said the 81-year-old.

Yong, who has been offering fortune-telling services for 39 years, said he did not feel tired travelling such a long distance daily.

“Sitting here, enjoying the breeze and peace is priceless,” he said.

It took craftsmen from Thailand 10 years to build the sitting Buddha measuring 30m high and 18m wide at the 2.4ha Wat Machimmaram in Kampung Jambu, Tumpat. The statue was completed 17 years ago.

The inner sanctum of the Buddhist temple in Kampung Jubakar.

The smooth blending of Thai and Chinese architecture is evident in Wat Machimmaram.

Incidentally, this wat is also one of the main venues for celebrations such as Kahtinna, Loy Krathong, Saibat and Songkran.

Tumpat’s Wat Phothivihan in Kampung Jambu is the most famous temple in Kelantan, having one of the longest sleeping Buddha statues in South-East Asia.

Among other attractions at this wat is the Chinese pavilion, a hall featuring Tibetan architecture and statue of the 18-arm Bodhisattva Avalokitesvara.

Standing 60m high from its base, it took 10 years to complete the statue. Construction was completed in 2008, marking Kelantan’s complete collection of the reclining, sitting and standing Buddha.

Wat Phikulthong is a hive of activity during weekends and school holidays as it offers Thai language classes while Wat Kok Seraya’s main attraction is the feminine Buddha with Chinese features.

Although the temple in Kampung Kok Seraya is rich in Thai architecture, Chinese influence reflected in the feminine Buddha statue showcases Tumpat as a melting pot of minority cultures. 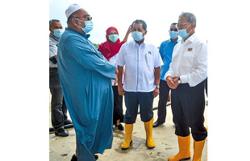