Fernz and Lim with their dogs Lucky and Cleo. The couple have five dogs and seven cats at home. - Photos: RAYMOND OOI/The Star

SHE may not be able to rescue dogs everyday, but Natasha Fernz hopes to be able to give them a chance at a better life – one shirt at a time.

Fernz first learned about the dog-anxiety product Thundershirt when she was looking for a solution for her dog, Lucky, which had fear-aggression because of long-term abuse.

TTouch instructor, dog trainer and behaviour counsellor Sarah Fisher introduced it to her in 2010 in Britain.

“We rescued Lucky when he was just a puppy. He had been beaten and stoned by a group of boys who had chased him down with motorbikes,” said Fernz.

When Fernz and her husband, stand-up comedian Douglas Lim, managed to get a hold of Lucky, he was very aggressive.

“The minute we approached him, he would try and bite, and we could not do anything apart from feed him.

Aside from Thundershirt, Fernz has a variety of other solutions such as the Thunderleash, Thundertoy and Thundercap.

“Only Cleo (the couple’s own dog) was able to communicate with him, and he was only happy around her,” she said.

Fernz exhausted all efforts to make Lucky a more sociable dog but he only got more aggressive, and she later realised the hostility was because of fear.

“He had been so traumatised by humans that he just did not trust anyone.

“Sarah (Fisher) recommended that I put a Thundershirt on Lucky while continuing with some gentle training.”

Thundershirt’s patented design is said to provide a gentle, constant pressure which has a calming effect on most dogs.

“It was not easy putting the shirt on him, but once we did, although he did not immediately become the happiest dog, he was more receptive and did not freak out at the slightest thing,” explained Fernz.

She was then able to recondition his behaviour through training.

She had initially planned to rehome Lucky, but decided to keep him in the end. Fernz also fitted Cleo with a Thundershirt.

The family pet, Cleo, used to get carsick until she started using a Thundershirt.

“Cleo did not have any behavioural problems, but she would get carsick; a 10-minute ride would usually result in massive salivating and vomiting episodes.

“With the use of the shirt, the vomiting reduced over time, and now she does not vomit at all. We can take her everywhere,” she said.

According to Fernz, animal behaviourists have found that pressure wraps work well to help calm dogs down.

“Thundershirt was based on the same concept that works on children with autism and people with severe anxiety problems – the wrap helps them focus and relieve anxiety.”

Phil Blizzard, the creator of Thundershirt, first tried to use bandages on his dog, Dosi, which had a fear of thunderstorms and fireworks. However, he had problems tying them.

“If you do not know how to do it properly, it could cause discomfort, tangle or suffocate your pet.

“So, he came up with Thunder-shirt, which has become very popular in the United States and Britain,” said Fernz.

She firmly believes a lot of dog issues can be helped with Thundershirt.

“It’s not a cure-all, but it is useful, especially when dealing with difficult dogs.

“It is mainly useful for situations involving thunderstorms, fireworks, leash pulling and travel sickness, and also as a general training tool,” said Fernz.

Thundercap works for dogs who are very reactive, the cap reduces their vision so that the pet will be less distracted.

“Dogs somehow respond better with the shirt on; I use it a lot with my rescue dogs, and particularly, for puppies during basic obedience training before putting them up for adoption,” she said, adding the dogs learn very quickly.

Not long after Fernz started using the product, friends began asking about it, and soon, there was a market for Thundershirt in Malaysia.

“I started to offer the dog shirts to local dog owners through a blog, and initially they were only available by mail order.

This year, Fernz launched her online store at www.thunderdogsmalaysia.com where more stock is now available.

“Demand increased with the growing number of cases of dogs getting lost after being frightened by fireworks or thunderstorms,” said Fernz, adding that it was especially relevant this festive season.

While it is in the pipeline, Fernz has no immediate plans to make the product available at pet shops.

“Many Malaysians still have a lot of questions about how this works, so I am keeping it online where people can ask me questions anytime.”

Fernz also posts articles about the product, and occasionally, gives tips on the ThunderDogs Malaysia Facebook page on how to manage dog anxiety.

Thundershirt comes in all sizes and different colours, and can fit a Chihuahua right up to a St Bernard or Great Dane, and prices start from RM225.

Hopefully, with the shirts, dog owners will not give up on their pets so easily.

“They will find the dogs more responsive and obedient, less skittish and easier to take care of.

“We are doing this to help more dog owners be aware that there is a solution to their problems.

“Perhaps, there will be fewer cases of abandoned dogs,” concluded Fernz. 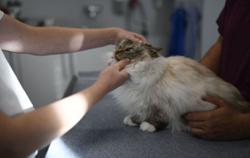