Park supervisor Ramani Kobalakrishnan holding a Slow Loris which is one of the primates that can be found at Farm In The City Petting Zoo, Kuala Lumpur. —filepics

NOW that we are in the Year of the Monkey, it pays to know your apes.

While the iconic orang utan and the proboscis monkey from Borneo leap to mind when we think about monkeys in Malaysia, the peninsula is not short of its own species as well.

In a list provided by the Wildlife and National Parks Department (Perhilitan), primates in peninsular Malaysia include the ubiquitous macaques – the familiar kera or long-tailed macaque and beruk, which is the stump-tailed species.

Other monkeys are the lotong, which include the Silver Leaf Monkey as well as lotong ceneka (Banded Leaf Monkey) and lotong chengkong (Dusky Leaf Monkey).

Forests in this part of the country are also the natural habitat for the Greater Slow Loris (Nycticebus coucang), locally called the kongkang, that has been on the International Union for Conservation of Nature’s (IUCN) ‘Vulnerable’ Red List since 2008.

The number of lorises, unfortunately, has been on the decline due to issues such as pet-trading and extensive habitat loss, despite the fact that it is classed under Schedule II in the Wildlife Conservation Act 2010.

Endau Rompin National Park wildlife researcher Adlil Ikram Shaharuddin, who specialises in biodiversity and conservation, said that in the illegal pet trade, lorises often have their teeth pulled out by traders to avoid being bitten.

“This usually leads to infection and loss of appetite, resulting in the animal’s death,” Adlil said.

Reintroducing such maimed primates, which are slow-moving and have a lower metabolic rate than mammals of equivalent size, to the wild, especially those rescued from the illegal pet trade, has been difficult, said Adlil.

For the more outdoorsy types, the characteristic ‘hoo-hoo’ calls of the siamang, one of three gibbon species in peninsular Malaysia, in various pitches and volumes would be familiar, especially in the forests near Gombak or in Pahang.

Swinging from branch to branch as the primary means of travel, the gibbons are the siamang (characterised by an inflatable gular sac around the throat); the agile or black-handed gibbon; and lar or white-handed gibbon (ungka hitam and ungka putih).

Two of the siamang’s toes are joined by a thin membrane, hence the term “syndactylus” in its scientific name.

This ape is also under threat from the illegal pet trade and habitat loss.

“Poachers looking to take infants for the wildlife trade will end up wiping out the whole family of ape.

“This contributes to the loss of numbers, as well as the slow maturation of the siamang, which takes about eight years to become an adult,” said Adlil

A siamang at the Janda Baik Wildlife Fauna Breeding and Research facility.

“Studies on population sizes have been done in the past, but as far as I know, there are no current assessments.

“Data for the peninsula from the 1980s suggested there were 29,000 individual siamang, 46,000 Lar gibbons and 4,000 agile gibbons,” said Dr Ruppert, quoting Primate Conservation, edited by the late Prince Rainier III of Monaco.

Dr Ruppert suggested that the scarcity of recent research data was due to the inaccessibility of the gibbon habitats.

“Siamang prefer mountain ranges, their stealthy and shy behaviour high up in the canopy makes observation difficult and there is also probably a general lack of interest by researchers in the past,” she explained, pointing out that most studies on gibbons were actually done in other countries with or by Western researchers.

One issue with gibbons, similar to the slow loris, is their popularity in the exotic pet and wildlife trade, despite all five being listed as Schedule II (Totally Protected) wildlife in the Wildlife Conservation Act 2010.

“Due to their friendly, non-aggressive nature, people think they make cute pets.

“The fact is, primates make very poor pets. Because they are so intelligent, they suffer tremendous psychological stress, and their health is damaged when taken away from their mother, their social group and natural habitat, and fed with the wrong diet,” Dr Ruppert said.

Many gibbons become mentally and physically ill, and die in captivity if not cared for in a species-appropriate manner, meaning, big natural enclosures with plenty of opportunities to move, forage, play and interact with mates.

The black-furred agile gibbon can only be found in the north of the peninsula, and usually associates in a family group of two to six individuals, comprising the male, female and offspring.

The Lar gibbon ranges throughout peninsular Malaysia and plays an important role as a keystone species.

Largely fruit-eating, the white-handed gibbon also plays a role in seed dispersal and the growth of new trees and forest cover.

While wildlife is generally in trouble due to the loss of habitat as human development closes in, this in turn has pushed up the number of human-primate conflicts.

According to Perhilitan, long-tailed macaques (Macaca fascicularis) or kera are the species involved in the most human-wildlife conflicts.

Statistics provided from 2010 till 2014 show 21,197 complaints of harassment by macaques received by Perhilitan with Selangor generating the most (6,086 complaints) followed by Johor (3,351 complaints) and Kedah (2,155 complaints).

Most of these incidences take place around destruction of crops and property.

The reported cases included intimidation and injury, while the last monkey-related death was recorded in 2010.

Currently, the wild macaque population in peninsular Malaysia, based on a 2013 population study, is estimated at around 450,000.

A white-handed gibbon with its young A long-tailed macaque spotted along Sepang River. at Taiping Zoo and Night Safari.

As one of the most widespread primate species in Malaysia, long-tailed macaques have adapted to various environments and are tolerant of various altitudes, from sea level to 2km above sea level.

In mid-2013, the number of macaques being culled was estimated to reach more than 100,000 and this provoked an outcry from animal lovers and researchers.

According to Perhilitan Biodiversity Conservation Division director Dr Pazil Abdul Patah, more and more macaques were entering human-inhabited areas primarily because of the loss of their original forest habitats.

“Aside from building homes and farms close to the treeline and the original habitat area, you also have members of the public who feed the macaques, which changes their behaviour,” said Dr Pazil.

Where previously the monkeys would forage in their natural habitat, they now would come to depend on humans for food, and if they are not fed, Dr Pazil said, they would start breaking into human areas to search for nutrition.

“We have taken steps to try and reduce macaque-human conflict,” Dr Pazil explained, saying that these steps included “shoot-to-scare” tactics, with the aim of frightening the macaque population into moving to another area.

Sterilisation programmes have also taken place in select places while educational talks to human populations co-existing with macaques are held to drive home the message of keeping the area clean and cautioning against feeding the monkeys.

“Shooting the monkey is a very last resort move done when the monkey injures or threatens the lives of people,” said Dr Pazil. 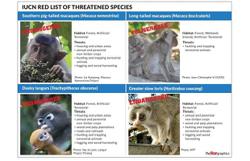 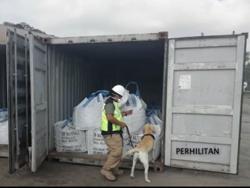 Animals are protecting their kind from poaching and wildlife trafficking