A ‘precious’ place on state border

There are many theories as to how the name Broga came about.

According to former village head Datuk Hoo Nit Sing, it was formerly known as Beroga.

“There was tin ore here, hence it is ‘berharga’ (precious) in Malay. It then became Beroga and today it’s known as Broga.

“Another story from the orang asli is that Broga is the name of a bird that could be found on top of the hill,” he said.

There are more than one thousand villagers and about 80% of them are Hakka.

“While they were previously in agriculture, be it rubber tapping or growing vegetables, these are now their side business. “Some villagers have either become hawkers or work in construction,” said Hoo, adding that Broga was attracting domestic tourists.

“Tour and travel companies also bring people here for a visit,” he said.

The 147-year-old Sak Dato Temple is one of the must-see places.

The temple’s name is connected to the neighbouring orang asli village, Hoo said.

“It is said that there was an orang asli from the village named Aman. As he had many Chinese friends, he wanted a Chinese name. He took the surname “Shi” (meaning stone in Chinese) after a friend and called himself Shi Man. When he died, he became a deity, hence the name Sak Dato (pronounced as shi na du in Mandarin).

“Another saying is that the temple is built among stones,” said Hoo, who is also the temple committee chairman. 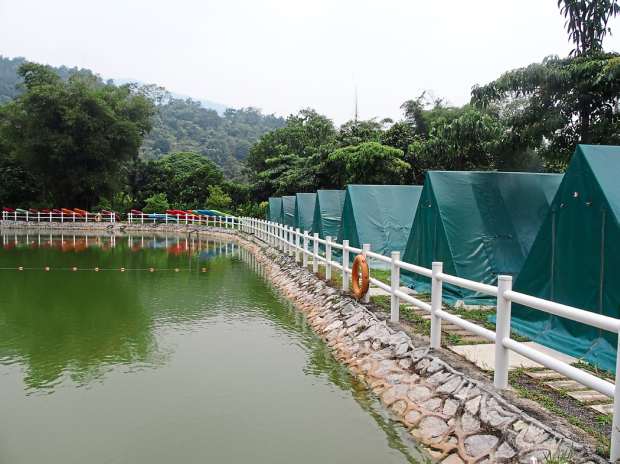 There are several pavilions and benches for visitors to rest at and various statues, such as the 12 Chinese zodiac signs, that make good photo opportunities.

I remember Chinese New Year music videos that were filmed here many years ago.

Hoo said previously devotees only came to the temple to pray but these days, the hanging bridge, giant Monkey God statue and a herb garden were added features making it an interesting tourist stop.

He said the statue, at approximately 21.95m, was the tallest he had ever seen.

There is also a cultural centre at the foot of the temple.

Visitors can buy souvenirs or view antiques donated to the centre.

At the centre, Hoo showed me photos of activities organised by the committee to help the needy.

To cater to the increase in visitors, several homestay and resorts can be found in the area.

One of them is Paradise Valley, which was founded by Broga Hill Eco Farm Resort Sdn Bhd managing director K.S. Lam. 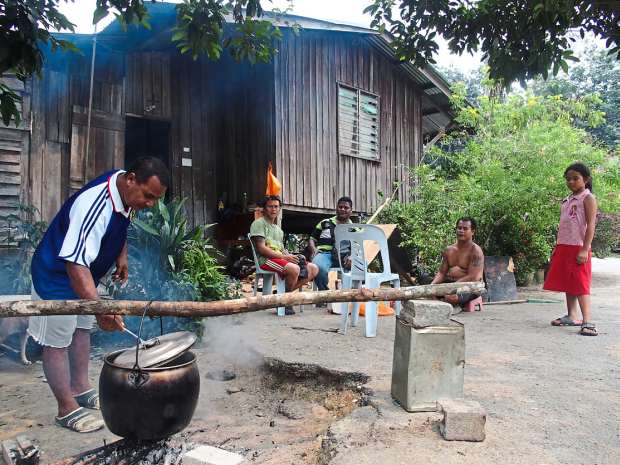 Villagers at the Kampung Orang Asli cooking a meal on a relaxing Sungay afternoon.

Lam said the plot of land used to be a rubber plantation.

“Initially I used it for swiftlet farming. Later, I saw the opportunity for the place to be turned into a resort as there’s Broga Hill and a mini waterfall nearby.

“It wasn’t an easy task as I invested a lot of money into this project,” he said.

It appears that his investment and perseverance have paid off, as the resort has been receiving bookings for family outings, team building, school excursions and company seminars, especially over the weekends, public holidays and during the durian season in July.

Guests can also choose to stay in dormitories or tents.

Hoo said a RM200mil tourism project by a private company was in the works.

“They will plant Aquilaria trees, which can be used for medicinal purposes or to make tea,” he said.

Before I ended my day tour in Broga, I stopped for a refreshing coconut shake at a roadside stall with an interesting name, Boyfriend Coconut Shake (nan peng you ye bing sha).

Ko Seiw Min, 19, said she was helping her boyfriend run the stall, hence the name.

There are also several ikan bakar restaurants here for those who would like to have a meal before continuing their journey.