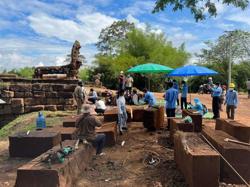 The second phase restoration work on the Ta Ong Bridge at the Angkor Archaeological Park in northwest Cambodia’s Siem Reap province has been completed, the Apsara National Authority (ANA) said in a press statement released recently.

Loeu Channora, an archaeologist at ANA’s Department of Conservation of Monuments and Preventive Archaeology, said the project focused on the southern part of the bridge, reinforcing its collapsed portions and restoring the dragon-styled hand railings in the length of 70m.

“During the restoration work, our team made a list of plans, conducted stone registration, repaired stones, fallen pillars and walls, as well as restored the dragon railings to their original state,” he said in the statement.

“The restoration work is to preserve the architectural value, the historical value, the ancient heritage for future generations to learn about the ancient infrastructure and to understand the work of the ancestors,” he added.

The ancient bridge is also an important tourist destination at Angkor, Channora said, adding that the next phase project will be focused on restoring the upper floor of the bridge, which is currently in a state of decay.

The 800-year-old Ta Ong Bridge were dilapidated due to age, the effects of the weather, and the pressure of the great weight of the structure, the ANA said.

The bridge, built from laterite rock and decorated with a sandstone carving, is 75m long, 13m wide and 8m high, with 14 stone arches supporting its span.

The Angkor Archaeological Park, inscribed on the World Heritage List of the United Nations Educational, Scientific and Cultural Organization (Unesco) in 1992, is the kingdom’s most popular tourist destination.

The number of international tourists to the park had gradually recovered in the first five months of 2022 thanks to Cambodia’s full reopening of its borders to vaccinated travellers since last November, after most Cambodians have been fully vaccinated against Covid-19. Travellers who enter Cambodia are also not subjected to mandatory quarantine.

The park received 45,779 foreign tourists during the January-May period this year, up 859% over the same period last year, according to a government report.

Prior to the pandemic, it attracted up to 2.2 million international visitors in 2019, earning US$99mil (RM435.31mil) in revenue from ticket sales. – Xinhua 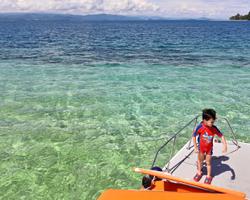 Why it's fun to holiday in Kota Kinabalu: From the mountain to the sea
Religious schools help revive the Moroccan city of Fez
No monkey business on this Malaysian-owned estate in London
How a hotel satisfaction promise has led to more discontent
For some Americans, Europe is the best budget-friendly place to visit this year
If you're a Lego fan, you should visit its birthplace in Billund, Denmark
Malaysian experiences a zen-like moment at a magical temple in Japan
Kampung Laut Heritage Site in Kelantan is open to visitors
New Rwandan eco-tourism park restores urban ecosystems in the city
Why Malaysians should visit Jeju, South Korea's idyllic holiday island