Malaysian family discovers train that runs through a market in Bangkok

You can actually touch the train if you stand close enough to it. — Photos: OH SEONG POR

We all miss travelling, but we can always reminisce the good old days when we could holiday without a worry. We’d love to hear what made your trips so special. Your story – experiences, tips, advice – should be 700 to 800 words long in Word or Text format. Please attach some photos (1MB, captioned) in a separate email. There is no payment for submissions, and we reserve the right to edit all submissions. Email star2travel@thestar.com.my with the subject “Readers Share”.

Thailand's Bangkok is known for its markets but among the many popular ones, I find Maeklong Railway Market to be the most fascinating.

It is famous for having a train pull right into the middle of the market!

I had the opportunity to visit this railway market with my my wife, mother, daughters, and eldest sister a few years back. We were in Bangkok and Hua Hin for almost a week, so we visited plenty of places.

We made our journey to Maeklong Railway Market early in the morning by bus. The market is located at Samut Songkram Province along the coastline of the Gulf of Thailand. It is about 60km from Bangkok and takes about 90 minutes to get there by bus.

According to our tour guide, a Malaysian who has lived in Bangkok for over 10 years, Maeklong originally was a fishing area. A market was established in 1905 for the communities there.

Later, the government constructed a railway in Maeklong in order to transport goods to other parts of Thailand. The railway has a narrow track gauge of 1,000mm (track gauge is the spacing measured between the inner surfaces of the load bearing rails). 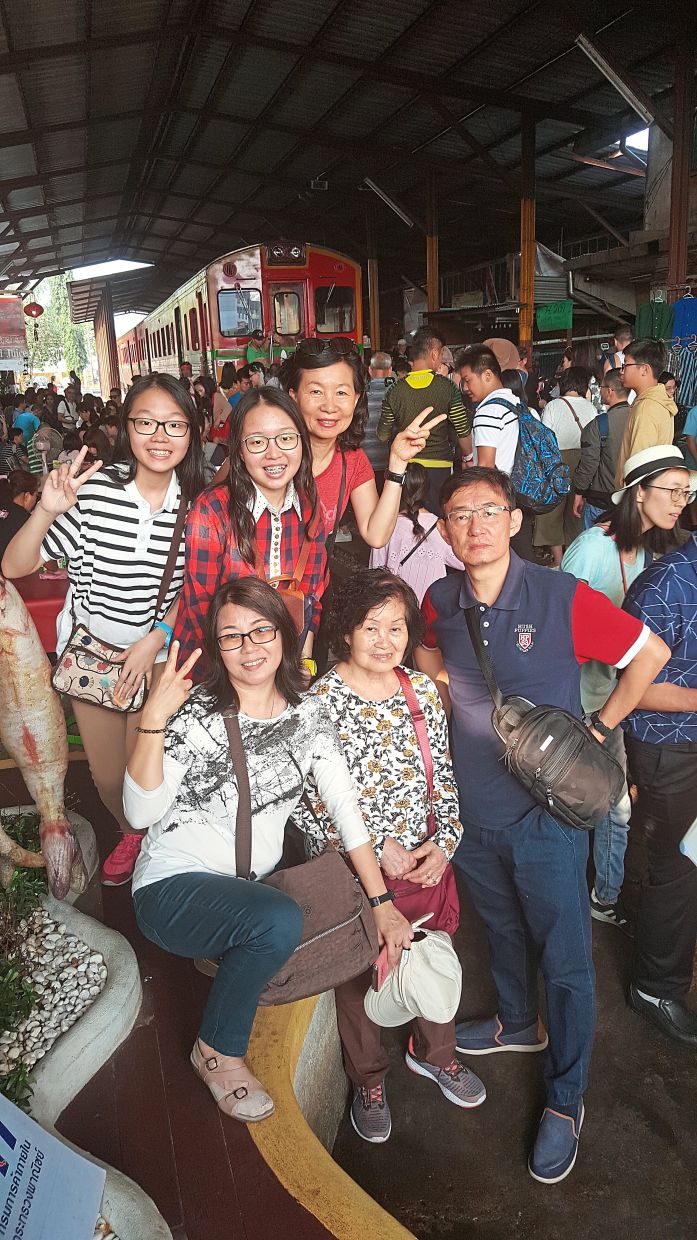 In 1906, the first train was hauled by three 0-4-2T wood-burning tank engines before it was replaced with two Henschel 4-6-2 conventional steam engines in 1955.

In 1957, a pair of Henschel 440hp 2-6-2 diesel locomotives were introduced to haul cargo and passenger coaches. Over the years, more modern diesel engines were added to the railway service.

When we got there, the area was already bustling with activity, with tourists and locals walking around. Near the market entrance, there was a railway crossing gate which everyone must pass through. Many motorcyclists ignored the crossing sign and alarm because they couldn’t or didn’t want to wait. This actually happened in front of the station master, who didn’t do anything to stop the motorists.

As an engineer, I thought it was a very dangerous stunt which would affect anyone nearby. To my surprise, though, many tourists thought that this was a unique thing and took many pictures of the motorists. Some even posed in front of the crossing gate.

The Maeklong Railway Station is a simple station with a single platform for embarking and disembarking. There are two narrow tracks running parallel to each other.

Many tourists were roaming inside the station, taking photos of everything, while some stood along the granite dividers waiting for the train to run through the market.

This was unusual to me as I had never seen this kind of thing at any station in Malaysia, or any other country I have visited. Even though I knew it was dangerous, my family and I joined the crowd and posed for photographs at the dividers too. It was like the old saying – if you cannot beat them, join them!

After a while, we decided to hit the market. There were two rows of stalls sandwiching the railway track. It looked like an ordinary market, really, except that there was a train track running through the centre. 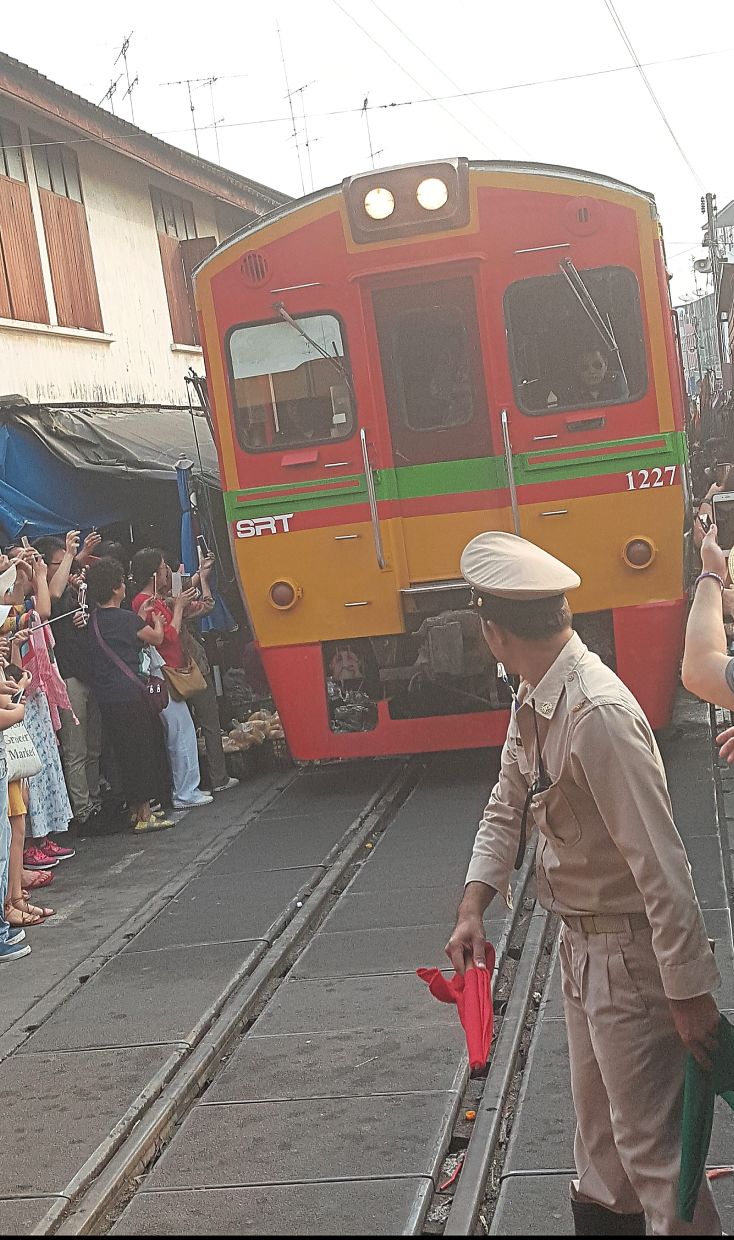 You can actually touch the train if you stand close enough to it.There are various goods sold at the market including seafood, fresh fruit, vegetables and meat. There are also stalls selling clothes and souvenirs. All the stalls’ awnings were designed in a way that allows the vendors to quickly lower or pull them back to make way for the train when it arrives.

While browsing the stalls, we heard a loud horn, followed by a charming bell alarm, indicating that a train was approaching. The station master blew his whistle and made an announcement through the speakers, asking everyone to make way for it.

Once the announcement was made, all the vendors started to lower their awnings. Some even had to put their goods out of the way, while others just left them on the ground.

It is no wonder then that the locals nicknamed this market as Talad Rom Hup, or the “Umbrella Close Market”.

Our tour guide directed us to a nearby stall, safely away from the track, and reminded us to get our cameras ready.

Soon, the red-and-yellow train arrived, only a few inches away from the stalls and goods. We could actually touch it as it was moving very slowly.

Once the train had passed, the vendors immediately got their stalls ready again and continued doing business as if nothing had happened. Local patrons continued with their shopping, but the tourists were still excitedly taking photos and videos of the train as it moved closer to the station.

It was a fascinating experience indeed. We joined the other tourists, ignoring our safety concerns, and followed the train until it stopped at Maeklong Station. Like everyone else, we also snapped many photos.

After spending a few hours there, we took the same bus and headed to Hua Hin, another magnificent place waiting to be explored.

To me it was a wonderful experience and I am glad that such a unique market had survived for decades, serving local communities and attracting many tourists.

It is no wonder then that the Maeklong Railway Market is marked as a “heritage market”, and has appeared in many international travel documentaries.