Fashion is now on the move again. Photo: Prada

As the world wakes up again to gatherings with friends, fun parties and cross-country travel, fashion is quickly pivoting on its axis.

Menswear collections for this “transition season” celebrates the return of unadulterated glamour.

Two years of having to tone down on our social engagements left lots of us suffering from cabin fever. Designers have just the remedy – bold, bright and whcky collections.

The sentiment is that we just need to go back to having fun with the way we dress, and not feel guilty about it.

Yet, some things have changed. The need for comfort will never be forgotten.

While we probably (or hopefully) won’t return to the phenomenon of sweatpants and oversize sweaters again, there is a compromise to be found in the Spring/Summer 2022 designs.

Read more: Can fashion weeks be sustainable? A new museum exhibit looks into the issue

Elements of tailoring have re-emerged, but in the form of a more casual, less restrictive cut.

Fashion houses are also quick to reference destinations all over the world, citing them as inspirations.

Dior for example, recently unveiled a capsule menswear that draws from the relaxed surf vibe of Venice Beach, California. It was produced in partnership with Eli Russell Linnetz of streetwear brand ERL. 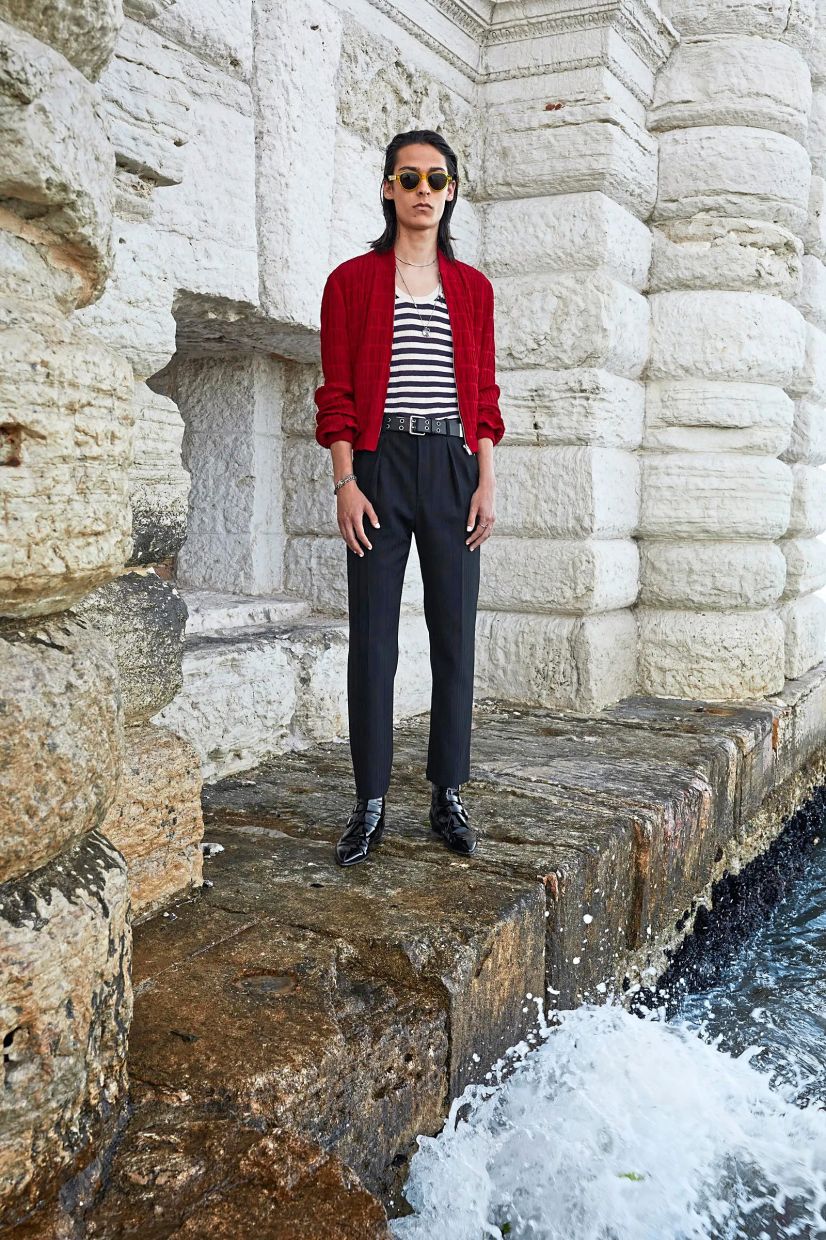 People are harbouring a pent-up wanderlust, so is fashion. — Saint LaurentThe designs have been described as “uniting the savoir-faire of Parisian haute couture with Californian culture”, and labelled as possesing sort of a “slouching, easeful, everyday sensibility”.

Other big names signalled at a change of perspective as well – or rather, a shift in mindset when it comes to menswear, both how it should be designed and worn.

Fendi’s message was about breaking boundaries.

In the interviews that menswear creative director Silvia Venturini Fendi gave to fashion magazines, she spoke largely about pushing the notion of freedom and setting gents free.

Her designs for Spring/Summer 2022 made good use of pastels to signify optimism.

Some of the Fendi pieces were a little odd, like a cropped suit that left a model’s belly exposed, but overall they exuded a carefree feel.

Maybe the collection is just a half-and-half version of what fashion has now come to be – between stay-at-home styles and essentials for a world heading back to normal living.

The term used to define it however, was “post- sartorial tailoring”. The label was reported last year to have been building a new atelier in Novara, Italy, for the construction of all these new jackets, suits and other garments. 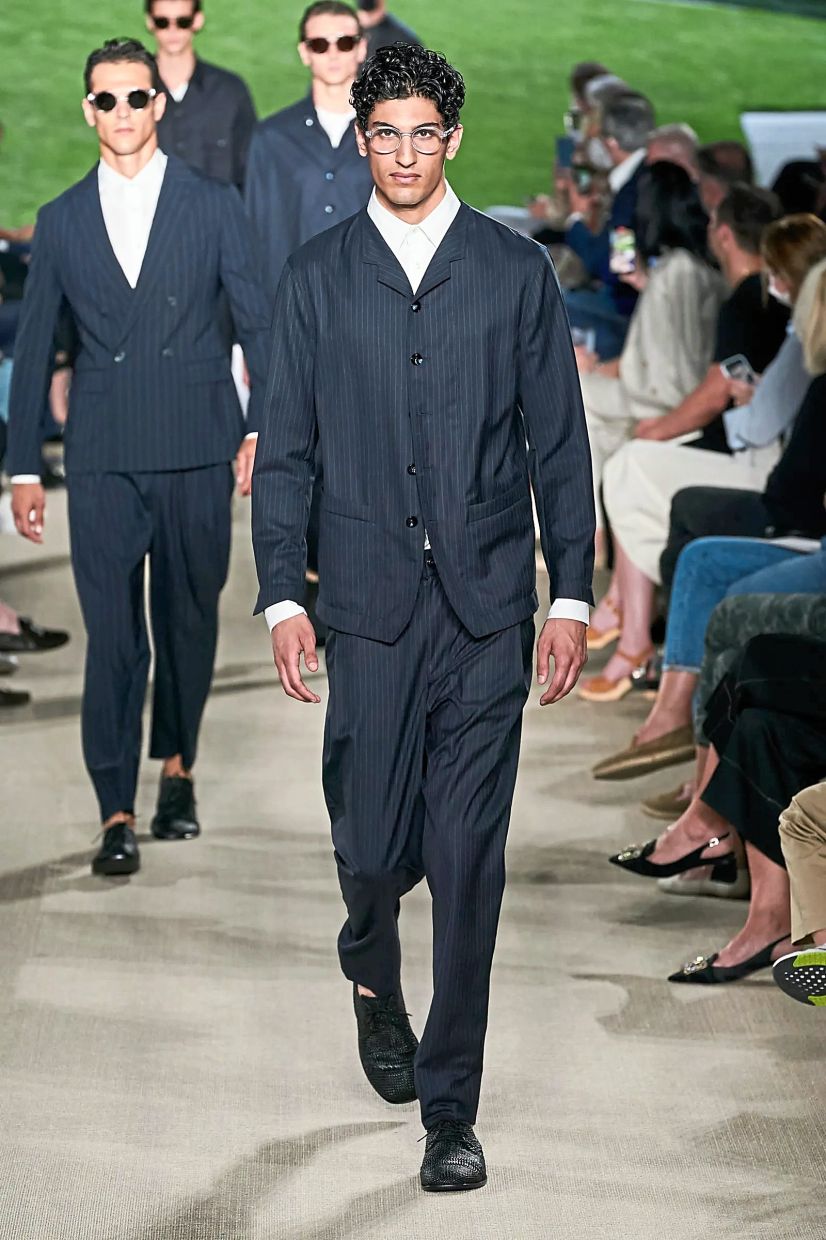 Ermenegildo Zegna also brought back the trend of jumpsuits for men. This was something of a must-have item a couple of years back, and it pops up again every new decade or so.

The closest to the traditional suit would be the ones from Giorgio Armani.

That said, some of them looked more like pyjamas. Although this could be intentional, as Giorgio Armani himself has said that he wants them to be more than just a blazer and a pair of trousers.

To him, a suit can also be just a shirt and trouser made with the same material. Think of it as a concept combo instead.

The idea of formality in the Giorgio Armani books seems to be more about deconstructed designs that are nowhere near the traditional forms of the past.

Out in the world again

Like how destination weddings became quite the thing when travel restrictions began easing early in the year, destination dressing is also a trend.

If not directly inspired by a location, then the attitude of the people living there.

Saint Laurent looked to Venice, Italy. The show itself was set on the island of Isola Della Certosa and celebrates nature and creativity.

The city of Venice itself is known for being a hub for all things artistic. Thus it can be a perfect inspiration in this case.

Prada however, brought its men to the beach for Spring/Summer 2022 – both physically and in spirit.

So you can expect lots of short shorts, plus the ever-popular bucket hat is now a staple. Romper suits are also a thing for the fashion house.

There were even models wearing blazers, while they bared their legs and donned just thin, loose tops. That’s the Prada gentlemen for you this season.

The collection’s video showcase showed models frolicking by and in the sea. It was filmed at the southeastern point of Sardinia, Italy, on the coast of Capo Carbonara.

Read more: 3D technology is being used to create shoes that perfectly fit your feet

If held within a bustling city, designers sought to portray the scene as packed, riotous and full of life. This is a far cry from the empty streets we observed when lockdowns were in place.

The Valentino collection (for both men and women) was unveiled at the Carreau Du Temple in Paris, an old marketplace area filled with cafes and restaurants. Guests of the show were seated at tables as if they were patrons of the establishments.

As for the designs, they target the Gen-Z generation.

The aesthetic is all lightweight and versatile, the type of unconventional, gender-neutral looks you will often see being worn in TikTok videos. 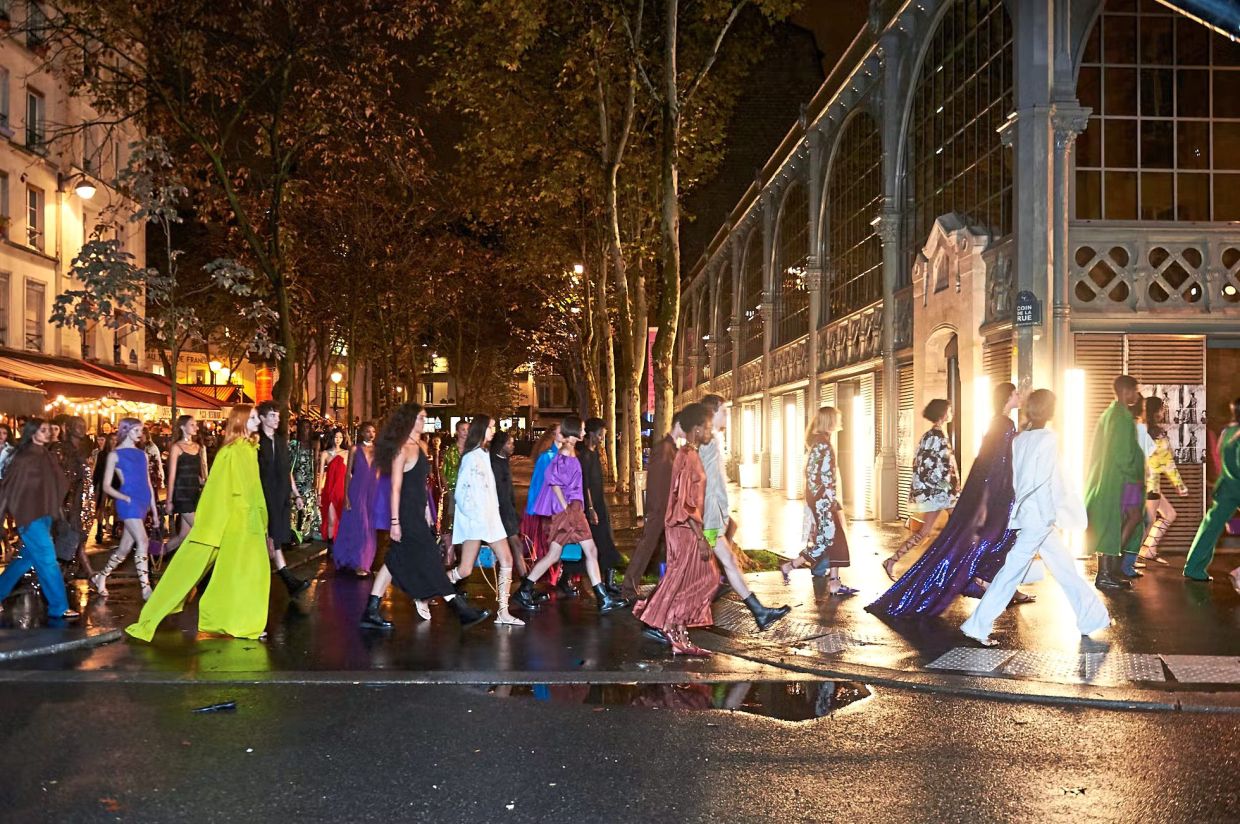 Life is back in full swing, and designers are only too glad to highlight this in their collections. Photo: Valentino

Again, male models were seen in short shorts. Outerwear, shirts and T-shirts appeared as loose, with the colours vibrant, as if made to catch attention on screen, more than anything else.

If you had to summarise this season’s menswear offerings, the word “sociable” comes to mind.

Designers are happy to return to designing for the life they know best: Shoppers back out in the world themselves, celebrating with friends, and dressing in their newest and brightest clothes.

This is a big change from the prior lifestyle – a means of living within Zoom calls, confined to bedrooms and on sofas.

Bikinis are out of style? Swimwear favour sporty cuts like the tankini instead

Malaysia's Vivy Yusof included in global fashion list alongside Giorgio Armani
Tudor welcomes watch lovers to a storied exhibition held in the heart of KL
Victoria Beckham debuts at Paris Fashion Week, but will this help her brand?
Perfume in the metaverse? Beauty brands are now getting in the game
Bella Hadid’s spray-on dress: How does it work, and everything you need to know about it
What is 'kidcore', the style trend that's taking Gen-Zs back to childhood?
Cher, 76, stuns guests at Balmain runway show with catwalk in a spandex bodysuit
Style Watch: Malaysian model Sofia Goh is all about the classic chic look
Top beauty-related mistakes you're making, and how to fix them
Designer Daniel Lee replaces Riccardo Tisci at Burberry