Gallery assistants handle the oak leaf 'Glamouflage' jacket made for Mick Jagger, among other items on display at Christie's. Photo: AP

Designing concert clothes for a rock star is not a simple task, especially if that rock star is as specific as Mick Jagger about the message he wants to send.

So back in 2013 when designer L’Wren Scott, Jagger’s then-partner, was creating designs for the Rolling Stones frontman to wear at the band’s historic first performance at the Glastonbury Festival, Jagger wanted something special.

Seeing the show as "a culmination of our British heritage”, he asked for something very British – an oak leaf. And so Scott designed a glittery green sequined jacket based on an oak leaf pattern, something she jokingly called "glamouflage”.

Jagger said later that few people recognised the oak leaf when he sauntered onstage to open with Jumpin’ Jack Flash.

The jacket is one of two Jagger items going on sale this week at Christie’s in London as part of the L’Wren Scott Collection, featuring 55 creations from the late designer who took her own life in 2014. 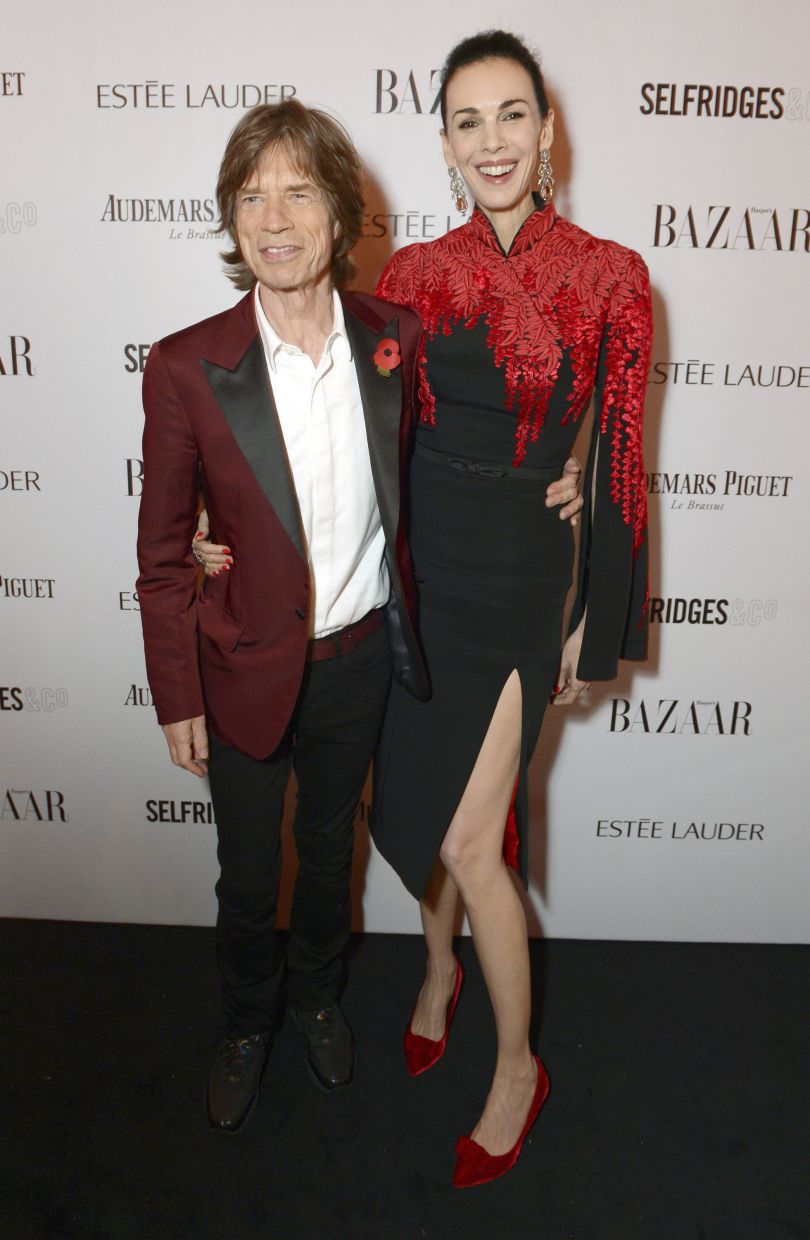 A 2013 file photo showing Mick Jagger and L'Wren Scott at the Harper's Bazaar Women of the Year Awards. Photo: APIncluded are red-carpet gowns worn by the likes of Penelope Cruz, Nicole Kidman, Jessica Lange, Sarah Jessica Parker – and Scott herself.

Proceeds will go to the L’Wren Scott MA Fashion Scholarship at Central Saint Martins, set up by Jagger in 2015 to help one student each year "reach their potential in the highly competitive environment of fashion”.

The online sale, which lasts until July 1,"is a celebration of L’Wren’s remarkable work and a wonderful opportunity for the public to see and enjoy her creations”, Jagger said in a statement.

"L’Wren was a talented and passionate designer with a keen eye for detail... She created beautiful pieces that were the epitome of elegance and sophistication, yet with a contemporary feel.”

Chosen by Jagger for the song Miss You, it commemorated the moment the Stones honored late bandmate Brian Jones in Hyde Park in 1969, just two days after his death, when real butterflies were released into the air.

Scott was raised in Roy, Utah, then left as a teenager to become a model in Paris and later a top Hollywood stylist and costume designer before launching her label in 2006 with a collection based on the "little black dress”.

She was known for her elegant creations in lush fabrics, as well as her high-end fashion shows – more like intimate lunches. Among her many influential customers was former first lady Michelle Obama.

The 6-foot-3 designer cut a striking figure on red carpets herself, and several items she wore are included in the Christie's collection: a black silk crepe knee-length dress with scarlet wisteria embroidery, and an embroidered kimono tailcoat ensemble in ivory silk crepe.

The sale also features a blue sequined gown worn by Tina Fey to host the Golden Globes in 2013, along with a lace cocktail dress Fey wore the same night on the red carpet.

There’s also a gown worn by Lange, embroidered and sequined from neck to hem with peony blooms in shades of red.

A pink lace evening gown with rhinestone shoulder embellishments was worn by Cruz, who recounts that she met Scott when she was still a stylist and they immediately connected. Proceeds will go to the L’Wren Scott MA Fashion Scholarship at Central Saint Martins, set up by Jagger in 2015. Photo: AP

"She was a true visionary and a beautiful soul, ” Cruz said in a statement released by Christie’s.

Also featured is a rainbow-striped, silk cocktail dress worn by Parker, who hailed Scott’s "permanent romanticism” and predicted: "She will be a beacon for young, dreaming designers.”

A number of gowns worn by Kidman highlight her long association with Scott, including a blush sequined sheath and a black-and-gold sequined gown she wore to the 2013 Oscars.

"We actually have about 12 looks that were worn by Nicole Kidman, and she has said herself that there wasn’t one L’Wren Scott look that she could pick as her favourite – there were just so many," said Caitlin Yates, of Christie's, who is working on the collection.

"They were quite similar in build and structure, and Kidman said once that whatever L’Wren Scott will wear, I will wear.”

Yates added that Scott "was pure luxury in the materials that she used".

"You would never see synthetic fabrics... it was always silk and satin. And I think that is very reflective in this collection. The material is absolutely phenomenal and everything has been hand done”.

The clothes, which was put on public view at Christie’s from June 11 to June 16, are now being sold online until July 1. – AP