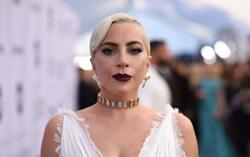 'House Of Gucci', directed by Ridley Scott, depicts the true story of the downfall of the Gucci family dynasty. Lady Gaga stars opposite Adam Driver, as Mr and Mrs Gucci. Photo: Twitter/@ladygaga

Lady Gaga, an Italian girl from New York, has revealed the first look at her transformation into Patrizia Reggiani, Maurizio Gucci's ex-wife, in the upcoming film about his assassination.

House Of Gucci, directed by Ridley Scott, depicts the true story of the downfall of the Gucci family dynasty. Adam Driver is portraying Maurizio Gucci, the former head of Gucci fashion.

Gaga shared a photo on Tuesday (March 9) of the onscreen couple posing on a snow-capped mountain, captioned "Signore e Signora Gucci", which translates to Mr and Mrs Gucci.

Channeling ski chic, Driver donned a cable knit turtleneck sweater and a separate white jacket fashioned around his waist, while Gaga is draped in gold chains and outfitted in all black with a white Cossack hat.

The film, which is currently being shot in Europe, dramatises the events around the assassination of Guccio Gucci's grandson, Maurizio.

Patrizia Reggiani was tried and convicted of orchestrating Maurizio Gucci's murder in 1995 after he left her for a younger woman. She served in prison for 18 years, where she gained the nickname Black Widow, before being released in 2016.

Roberto Bentivegna wrote House Of Gucci, based on the novel Sara Gay Forden novel The House Of Gucci: A Sensational Story Of Murder, Madness, Glamour, And Greed.