In the Jura mountains running along the French-Swiss border, the precision skills behind some of the planet's finest watches and automatons have been handed down through the generations. Photo: AFP

In the Jura mountains running along the French-Swiss border, the precision skills behind some of the planet's finest watches and automatons have been handed down through the generations.

The region's historical pre-eminence in a field combining science, art and technology has also been given a boost by the United Nations.

In December, the craftsmanship of mechanical watchmaking and art mechanics in the Juras were jointly added to Unesco's "Representative List Of The Intangible Cultural Heritage Of Humanity".

Junod is working on an automaton of Leonardo Da Vinci. His eyelids blink, and his sparkling eyes move, following his pen strokes as his arm moves from left to right.

"It's close to magic," Junod said as he brought Da Vinci's head to life. "There is renewed interest in these objects because we are living in an electronic age, and to see these mechanical artworks again – the mystery comes back, the magic returns.

"It revives this profession which had disappeared somewhat."

Pristine snow engulfs Junod's studio in the village of Sainte-Croix in western Switzerland, more than 1,000 metres up in the Juras, and less than five kilometres from the French border.

The area is a hotbed of creation in watchmaking and its close relative, art mechanics. It has been so since the 1685 revocation of the Edict of Nantes, which saw Protestants flee France en masse, many heading for safety in the frontier mountains, taking their skills and industriousness with them.

"The tranquillity of the mountains goes very well with the profession," said 61-year-old Junod, who is the fourth generation of his family working in mechanics in Sainte-Croix.

His 20-year-old nephew is among the five people working in the studio: a Steampunk's dream filled with cogs, pistons, mechanical butterflies, a cantering horse, 19th-century music boxes and colourful giant birds.

There is even a skeleton in a feathered hat, used to model movement; hands and legs hanging down from the ceiling; shelves full of miniature heads; tools galore and a giant eye with a rotating music-playing iris. 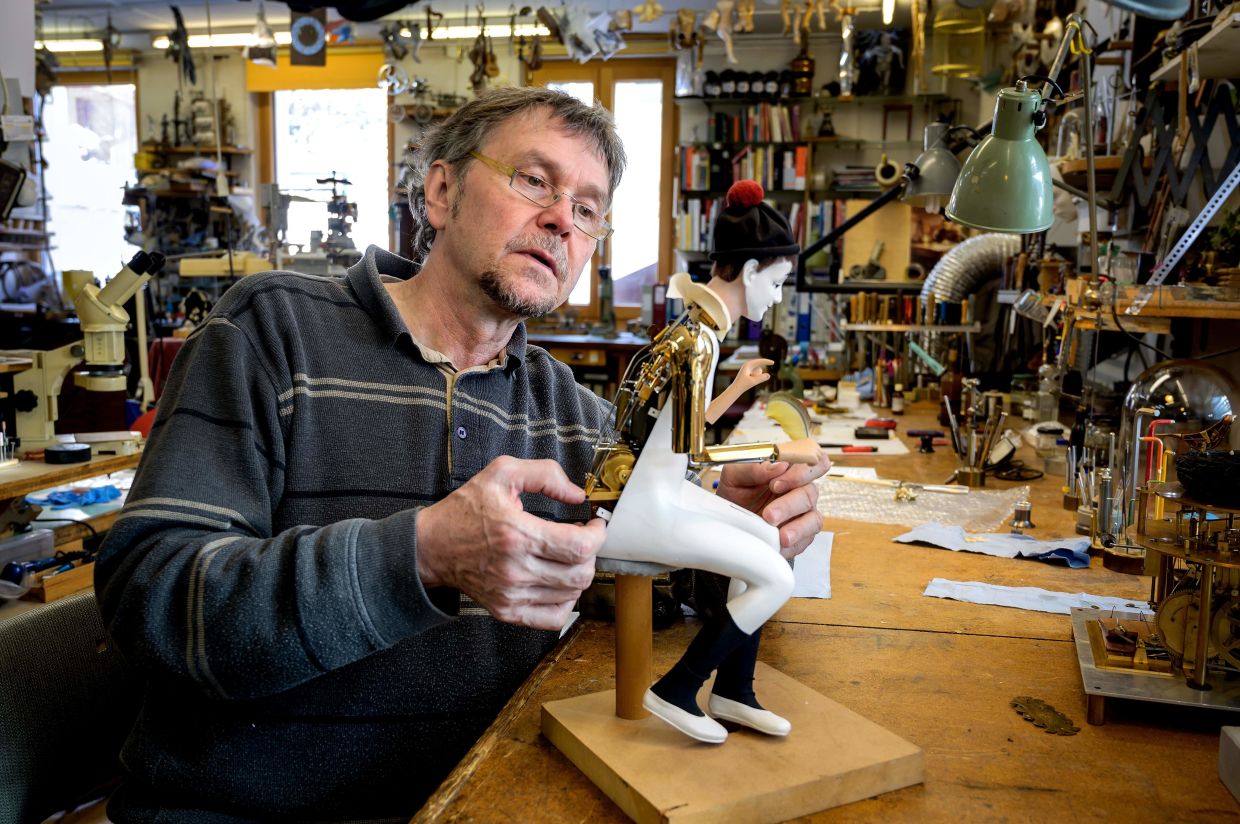 Francois Junod working on a moving mechanical artwork, in his workshop in Sainte-Croix. Photo: AFP

Junod and his team work on five or six pieces at once. The artform requires patience and curiosity. The automaton of Russian writer Alexander Pushkin – which could write 1,458 poems in ink – took five years; the Tapis Volant flying carpet took two.

"You have to like difficulty. You need patience. And you have to be passionate," said Junod.

The job satisfaction comes from seeing the finished product come to life, having overcome all the technical and aesthetic hurdles.

"Even within the same studio, everyone will have their own style in making an automaton," said Junod. "It's that which gives it it's soul. It really has a soul. No two are ever the same. That's the charm of this craft."

Fairies and the future

A timeless charm which can still find a captive audience among the smartphone generation, as happened with La Fee Ondine: a bejewelled fairy sat on a lilypad, her wings fluttering as she wakes to watch a water lily open and a butterfly emerging.

"Wherever we showed it, whether in Beijing, London, Paris or Geneva, every time, young people swarmed around it with their iPhones filming it. Because it moves. It's poetic," said Junod.

Read more: Would Claudia Schiffer be successful if virtual models existed in the 90s?

The local watchmaking and art mechanics industries were thought to be dying out when digital technology began to creep in from the 1970s onwards. But traditional Swiss watches saw off the challenge, and art mechanics also survived by embracing the possibilities opened up by computer simulations and three-dimensional printing.

"We can design objects that were impossible to manufacture in the traditional way and thanks to 3D printing, you can make incredible parts," he said, even in gold and silver.

"The imagination can go even further. Almost everything is possible." – AFP