British director James Kent (Testament Of Youth) is on board to direct and Spain's Frida Torresblanco (Pan's Labyrinth, The Assassination Of Richard Nixon) will serve as executive producer.

Balenciaga was born in 1895 in Getaria, a fishing village in northern Spain, and moved to Paris in 1937 where he made his mark as an innovative master of haute couture revered by colleagues and contemporaries such as Christian Dior, Hubert De Givenchy and Coco Chanel.

During the 1950s and 1960s, Balenciaga reached the height of his career by unveiling previously unseen styles, fabrics and shapes, such as the tunic, the "baby doll" and shift dresses.

Unlike many other designers, Balenciaga was very private and elusive, having given only two newspaper interviews during his 50-year career. On the day of his death, in 1972, Women's Wear Daily ran the headline "The king is dead".

The project, which is penned by British writing duo Rebecca Pollock and Kas Graham (The Book Of Ruth, Betty Ford) and marks the first biographical Balenciaga television skein, is slated to start production in 2021.

No casting details were provided.

Torresblanco, who currently runs New York-based Braven Films with partners Eric Laufer and Giovanna Randall, in a statement noted that Balenciaga "liberated women who were restricted in their corsets by creating a timeless, provocative and avant-garde way to live that continues to influence future generations".

"His creations changed the face of fashion, and his story, until now, has only been told through his fashion designs," said director Kent.

"I am thrilled to have the challenge of pulling from this visual, aesthetic space, and Balenciaga's intense life, to share this glamorous story with the world," he added in the statement.

VIS – which is led by JC Acosta, who is VIS president and also heads ViacomCBS Networks Americas – has been ramping up operations in Southern Europe, where the outfit recently announced a TV series on the life of Italian Renaissance painter Artemisia Gentileschi, who has become a feminist icon.

This project is also slated to go into production next year and, like the Balenciaga project, is also produced by Torresblanco who is known for her work with Alfonso Cuaron and Guillermo Del Toro and won a BAFTA for Pan's Labyrinth. – Reuters/Nick Vivarelli 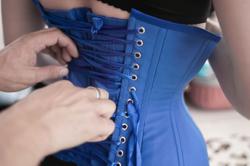 How the Malaysian modelling industry took the pandemic in stride, and survived Premium
Malaysian graffiti artist puts his own stamp on time with exclusive watch design
As big names pull out of Paris Fashion Week, student designers fill the void
Meet the designers who brought colourful diversity to Milan's fashion runways
Wearing a corset in an era marked by body positivity and self-love
Fashion and glam return to the Golden Globes, but at a distance
Supermodel Joan Smalls is on a mission to make fashion more inclusive
Delving into the afro-futuristic fashion of comedy film 'Coming 2 America'
Virtual makeup testers now the next big trend in online cosmetics shopping
How fashion at work is now different: 'I saw someone wearing just their socks'