Television shows have always influenced the way we dress, however, this phenomenon has been even more visible during the past few months.

After Emily Cooper's looks from Emily In Paris got fashionistas seeking out quirky pieces and accessories, and Lady Di's perfect 1980s style from The Crown inspired generations who were too young to remember it the first time, Beth Harmon has become an unexpected fashion influencer thanks to Netflix miniseries The Queen's Gambit.

Since it came out on Oct 23 on the steaming platform, The Queen's Gambit has been a huge success, attracting over 62 million Netflix viewers.

Needless to say that the show triggered renewed interest in chess, with The New York Times reporting on a 125% growth in chess sets sales in recent weeks, but more surprisingly, Beth Harmon's vintage costumes have also inspired fashionistas.

Global fashion platform Stylight analysed the requests launched by consumers on its site since the show came out. Stylight came to the conclusion that vintage is here to stay, notably thanks to this show taking place between the mid-1950s and 60s and its main star.

Beth Harmon, played by Anya Taylor-Joy, inspired fashion fans with her iconic checkered coats. The style platform noted a 383% growth of the number of clicks in this category since Oct 23, compared to the month preceding the drama's first broadcast.

And it's the signature looks worn by the star that are also the most popular online.

For instance, white wool coats recorded a 131% increase on the platform, while interest in turtlenecks also increased by +57%. In the same vein, lavaliere knot blouses got double the number of clicks on the style platform during the past weeks.

The findings are based on internal Stylight data from its 12 million monthly users across the 16 markets in which it is present. – AFP Relaxnews 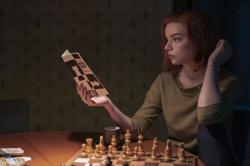 Pantone 'Colour Of The Year 2021': Celebrate grey and yellow in your makeup Premium
What's a fashion designer to do during a pandemic? Turn to film directing
Unique auction shines a spotlight on iconic French designer Chantal Thomass
If a scar feels like a blemish, here are a few beauty fixes to read up on
Angel Chen, China's rising fashion designer, snags another big collaboration
Expert tips to consider in the battle against irritated skin from face masks
With 'Bridgerton' surging in popularity, corsets are now back in fashion
5 Malaysian beauty queens prove style is more than just the way you dress up
Meet the next big fashion icon... Bernie Sanders?
Why 2021 could be the year ear makeup (finally) goes mainstream