Era loves Tamil movies so much that she can lip-sync many songs at the drop of a hat. Screengrab: TikTok/@Era.Rawther

TikToker Era Rawther, 27, loves to watch Tamil and Hindi movies, so much so that she knows many of their soundtracks like the back of her hand.

During the pandemic, the businesswoman uploaded over 400 TikTok videos (Era.Rawther), featuring her lip-syncing to various songs and dialogues in Tamil, Hindi, Malayalam and Bahasa Malaysia. Her videos went viral and she’s received close to seven million likes in total.

“I honestly don’t know how my videos went viral,” laughed Era. “I created the videos for fun, and I’m so surprised that I have managed to receive millions of likes from people worldwide.

“Even though I can’t speak Tamil or Hindi, I am a huge fan of Indian movies, especially releases from Bollywood and Kollywood.

“I’ve also received offers to act in Malay drama series after my videos went viral. However, I haven’t put much thought into becoming an actress,” said Era during a phone interview recently. Era chose to upload lip-sync videos because she find them fun. In addition, they do not require professional video or music equipment or vocal training. The only thing needed is one’s ability to synchronise the movement of one’s lips with the lyrics of a song or a dialogue.

“I was really bored during the stay-at-home period during the pandemic. To kill time, I decided to create TikTok videos. I kept busy working on these videos and that helped me to stay focused on creating video content that’s fun and pays tribute to Indian cinema,” explained Era, who co-runs a family business with her older sister.

The fourth of five siblings, Era is of Indian and Bruneian Malay parentage. Growing up, she spent a fair bit of time watching Kollywood TV dramas and movies with her father, businessman Nishadeen Ibrahim, 60. For some of her TikTok videos, Era dons a glittery saree complete with eye-catching accessories.“I love the storylines, song and dance routines, and actors. My father is of Tamil descent, and I used to watch many South Indian movies with him. That instilled my love for South Indian movies,” said Era, who is a fan of Kollywood actors like Kamal Haasan, Suriya and Rajinikanth.

Her 15-second videos feature songs from different genres ranging from pop, ballads to the oldies, from the 1970s to current hit songs. In some videos, she does an excellent job as a mimicry artiste, imitating dialogues from certain movies with impeccable timing.

“My Appa (father) enjoys black and white movies and films from the 1970s and 1980s. At home, we are constantly tuned to YouTube, listening to Tamil songs from the 1960s era,” said Era, who usually uploads one or two lip-sync videos a week.

By watching countless Indian movies over two decades, she’s mastered their dramatic facial expressions and dance sequences to a tee.

“First, I select an Indian song on YouTube. Then, I source for the song’s lyrics and use Google translate to enable me to understand the meaning of the song. I’ll memorise the lyrics and rehearse the song for an hour with the right body movements. The last step is to record the video in two or three takes,” said Era, who has over 243,600 followers on TikTok.

The tudung-clad lass is often seen in glittery sarees complete with eye-catching accessories in some videos. She has in her collection hundreds of sarees she bought on her many trips to South India.

In last year’s Deepavali video, she plucked up the courage to speak in Tamil, wishing Hindus a Happy Deepavali. The video had nothing but positive remarks from over 1,500 comments.

Instagram is new frontier for central banks. Is TikTok next? 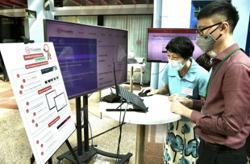