Retirees deal with fear and disrupted routines during Covid-19 pandemic

A resident of The Villages, a retirement community, gets tested for the coronavirus with a nasal swab at a drive-through site that accommodates golf carts at the local polo club. Photos: TNS

Gone are the weekly bingo games. Gone too are the daily shuttles around the golf course and the Friday bus trips to the mall. A vast game room, typically full of bridge players, is locked up.

“Nothing, ” said Carol Friedman, a 70-year-old resident of Wynmoor, a South Florida retirement community of 9,000 residents in the United States. “Can’t do nothing now. Everyone just sits here bored.

“I don’t want to get sick, ” Friedman continued with a shrug, as she complained of dried-up tips from her job at the on-property restaurant after it switched to takeout. “But if I die, I die.”

Retirees and snowbirds have long flocked to the slew of country club-like gated communities in Florida known for their communal amenities, low taxes and year-round sun. The elderly account for close to a quarter of the state’s 21 million residents.But now, as nearly half of the US adjusts to stay-at-home orders put in place to limit the spread of the coronavirus, life at many of Florida’s retirement villages has come to a standstill.

Republican Governor Ron DeSantis has resisted a statewide shutdown of non-essential activity, leaving senior communities here to navigate local restrictions and their own heightened health concerns in deciding how to battle the virus. The state has advised those who are 65 and older or have underlying health conditions to confine themselves at home.

As of March 15,60 deaths and more than 4,900 confirmed infections had been reported in Florida, with health officials saying that represents a tiny fraction of what’s to come.

Assisted-living facilities here have shut out visitors for weeks to protect their residents. Retirement communities have stayed open while increasingly curtailing services, some to angry response. Northwest of Orlando at The Villages, home to 125,000 retirees, the nightly happy hours at the town square have ground to a halt. Pools were recently shut down after residents broke rules against gathering in groups larger than 10.

At Broken Sound, a golfing community of several thousands in Boca Raton, an on-site restaurant has been converted into a drive-by grocery store so residents don’t have to brave the crowds at Publix supermarket. A half hour north of Fort Lauderdale at Wynmoor, recent changes have brought a mixture of reactions.

“Everyone is talking about it, ” said Patrick O’Brien, 62, who lives on Lucaya Lane with his 77-year-old husband, a lung cancer survivor who has mostly stopped leaving his residence. “And if they’re not talking about it, then it’s their kids and grandkids calling them to talk about it.

“I think it’s very real, and I’m very worried for those who have weaker immune systems, ” said O’Brien, who moved to Wynmoor seven years ago from upstate New York. “But I’m not worried about myself unless somebody around me is obviously sick. I’ve seen so much death in my life and, living here, you just end up knowing people who die.”

Having outlived two siblings and living in New York City during the outbreak of the HIV/AIDS epidemic in the 1980s, he said he accepted death as a “fact of life”.

Still, O’Brien, the operator of a one-man tech support company who is among the few working residents, has adopted a new routine. “When I get home, I sanitise, strip off all my clothes and take a shower before my husband will greet me.” 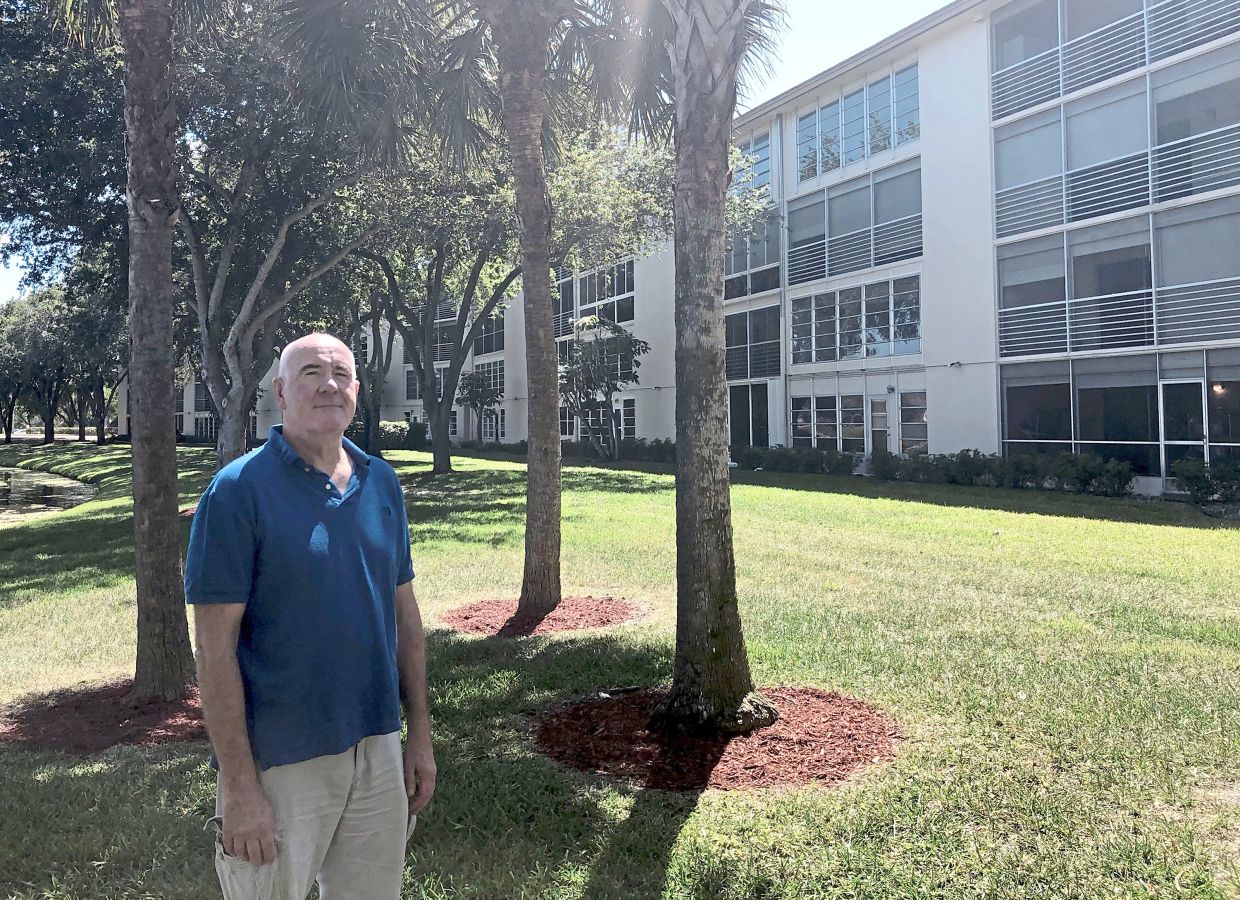 O'Brien outside the Lucaya Village complex in the Wynmoor community of Coconut Creek, Florida.

He’s also recruited new customers. He’s taught residents who stay indoors how to use FaceTime, Facebook and email to keep in touch with loved ones.

“All from 6ft (2m) away, ” O’Brien said. While The Villages, the country’s largest retirement community, is grappling with a surge in coronavirus infections – at least 33 have been reported – the Wynmoor Community Council has so far announced none.

The Coconut Creek development shut down all indoor activities on March 11, before restaurants and bars closed in many states across the country.

As a result: No more spring arts festival where residents would display homemade clay figurines. No more Hebrew, pottery or stained-glass clubs. The Rod Stewart impersonator concert was also cancelled. Some residents have sought to skirt the rules by running club meetings outdoors at the “cove”, a patio overlooking an 18-hole golf course in the centre of the development.

But the 19 pools have remained open, with lounge chairs rearranged to encourage physical distancing.

“We will get through this crisis together... stay healthy, ” said new signs posted around the community this month.

Mall buses now head only to grocery stores and the pharmacy, with a new “golden hour” route at 6.30am for senior-only shopping.

“It’s horrible, ” Wynmoor resident Joel Fish, 61, said on a recent afternoon as he waited in his wheelchair outside Bistro 19 for a tuna sandwich. “I used to ride on the bus for an hour, talk to the driver, then go to the movies, talk to people there, go to bingo, talk to people there.

“I get sick of being inside all day, ” said Fish, who is single with no kids. “I just watch Law and Order over and over.”

Fish worries about his sister and brother-in-law, in their 80s, who live nearby outside Wynmoor and hadn’t left home in days.

Despite no announced cases at Wynmoor, fears of an outbreak have grown. Many of Wynmoor’s Canadian winter residents have also left for home early after President Trump’s announcement that the US would close its border with Canada. Meanwhile, rumours and concerns mount.

Some have asked whether any Wynmoor residents were recently aboard Florida cruises popular with retirees. The community council has told those who had recently been out of the country on ships to not to leave their apartments for two weeks.

And after the governor ordered anyone travelling to Florida from the New York area to do the same, residents called security on a woman visiting her father. They accused her of going to the pool despite the quarantine.

“Outside guests are not permitted at all swimming pools, as well as the golf course, the racquet centre... If residents cannot follow simple rules, we will have no choice but to close them.” At Bistro 19, Friedman, the restaurant server, got into a debate recently with a co-worker.

“Social distancing is the only way we’ll get this done, ” said the colleague, Eileen Martin, 58, who lives outside the property.

Then they acknowledged how they were actually going about their daily lives.

“I’m not shaking hands, ” said Friedman, despite her ‘whatever will be’ outlook. “No hugging, no kissing.” – Los Angeles Times/Tribune News Service

Keeping our seniors safe from Covid-19

Nepal’s 'God of Sight' aims to make cataract surgery affordable and accessible beyond the country
A to Z of Britain's Prince Philip
Musician couple in New York raises money for food pantry with home concerts
In New York, the pandemic pushes some Orthodox Jews to leave their community
This Thai coffin maker kickflips caskets into skateboards
Growing vegetables in the Arctic Circle, thanks to permaculture
Malaysian church furnishes the needy with unused appliances and furniture
American janitor singlehandedly cooks to feed thousands during the pandemic
How baking a loaf of bread for a neighbour during lockdown led to a successful bakery in London
American flight paramedic helps wipe off patient medical debts during the pandemic