From left: Dr Lim, Shivaani and Dr Wan Iryani are inspiring women researchers who want to make the world a better place to live in.

A UNESCO report shows women make up about 28% of researchers worldwide but only 3% of Nobel Prize in science have been awarded to women thus far. The numbers may be small, but women scientists continue to lead groundbreaking research across the world.

This year, the L’Oréal-Unesco Fellowship For Women in Science were awarded to three Malaysian women who turn to science as a tool to improve lives and the environment.

The award, which was first established in Malaysia in 2006, aims to acknowledge outstanding women who are pushing the frontiers in the fields of science, technology, engineering and mathematics (STEM). The fellowship has provided over RM1mil in research grants to over 40 outstanding female scientists.

Shivaani is researching on mammographic density and breast cancer risks in Asian women, Dr Lim aims to develop an alternative version of LED light and Dr Wan Iryani is focused on honey consumption in controlling obesity.

Call for entries began in April and 193 Malaysian women scientists (aged below 40) applied for the fellowship. Shivaani thinks it is important for the younger generation of girls to see science as a career that will make differences in other people's lives. Photo: L'Oreal

Breast cancer is one of the most common cancers, and the leading cause of cancer-related deaths among women worldwide. Shivaani's research is focused on understanding the risk factors of Malaysian women and their chances of being diagnosed with the illness. She hopes to build an accurate risk prediction model and formulate effective screening strategies to detect breast cancer.

It is based on mammographic density (MD), a term used to measure different types of breast tissue visible on the mammogram. Increased MD is a strong risk factor for breast cancer.

"The amount of dense parts of a mammogram, after adjusting for age and body mass index, is associated with a greater risk of developing cancer. Studying this risk factor may provide us with useful information for breast cancer risk prediction in our population,” says Shivaani, 33, a research associate with Cancer Research Malaysia and PhD student at University of Nottingham Malaysia.

Shivaani, from Kajang, is happy with her win, and believes such awards help women scientists by putting their meaningful work in the limelight.

“Awards like these are very encouraging and will inspire more women to stay in science and realise they can make important contributions to society through science.

In Malaysia, there is a greater participation of women in the field compared to the past. Women are receive greater recognition for their contribution in science, ” says Shivaani, who hopes to release an algorithm prototype on breast cancer risk prediction within the next five years.

“The majority of science graduates at bachelors and masters level worldwide are female. But, women are less likely to pursue careers in science. It is important for the younger generation of women to see science as a career that will make a difference in other people's lives.” Dr Wan Iryani hopes her research can make a difference to people with diabetes and obesity issues. Photo: L'Oreal

Symbiosis between honey and blood sugar

Dr Wan Iryani wants to find out the co-relation between honey consumption and how it can help reduce excessive weight gain.

The mother of two hopes to prove the goodness of pure honey in helping to control obesity. If the associate professor at Universiti Malaysia Terengganu succeeds in her research, the technology can be used to spearhead Malaysia’s movement towards reducing many non-communicable diseases like obesity, diabetes and cardiovascular diseases.

“Diabetes is one of the major health problems in our country. My main research is focused on insulin signalling pathway, which is involved in our metabolism, ” says Dr Wan Iryani, 40, who has spent nine years researching on honey consumption and obesity.

One of her biggest hurdles in her research is the issue of adulterated honey in the market. Most fake honey contain glucose, sugar syrup and corn syrup.

“Many people consume honey because they want to be healthy. But because of the dangers of fake honey, it can jeopardise the medical benefits of pure honey. By using the scientific evidence, I hope I can spread the truth to help as many diabetic people as I can, ” says the researcher who works closely with entomologists, food analysts and health officers for her research. At work, many people spend eight hours (or more) in front of the computer. After work hours, they spend more hours surfing the Internet using smartphones and watching TV.

Artificial lighting like light-emitting diodes (LED) are often used as indoor lighting as well as for computers and smartphones. Though LED bulbs save energy, research has shown they have irreplaceable damage to the cells in the eye’s retina.

Dr Lim research aims to study the impact of replacing blue light with blue-free radiation lighting. She wants to use violet light and determine if it is more suitable for the eyes.

“My research aims to produce violet LEDs (VioLEDs) by varying the composition of light emissive layers. I want to tune the wavelength and subsequently create optimum VioLEDs that are safe for the eyes, ” says the 35-year-old researcher from Melaka.

Issues related to eyesight is something that Dr Lim holds close to her heart. 16 years ago, her father lost vision to his right eyesight due to parasitic infection.

“Doctors couldn’t do anything so my father’s eyeball had to be removed. It made me realise why it is so important to protect our eyes. This served as an inspiration for me to research on something that could benefit society. I chose to focus on LED as many people spend hours in front of tech devices, ” says Dr Lim, a researcher with Universiti Sains Malaysia’s Institute of Nano Optoelectronics Research and Technology.

Dr Lim work hours are long and unpredictable. It involves researching on fabrication processing, testing for material for materials and devices on nanoelectronic scale.

Though there are more men in her department, Dr Lim thinks women are starting to break down the barriers and work hand in hand with men in the world of science.

“We have women Nobel Laureates even though not as many as men. Compared to Singapore, Taiwan and South Korea, Malaysia has a high number of women scientists. Winning this award tells the world that women scientists in Malaysia are brilliant. 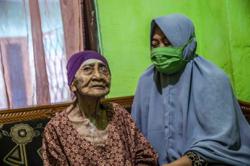