Malaysian youths and their nation-building initiatives

By LIM MAY LEE, JC LAM and JAYDEE LOK

Check out these young Malaysians who have been running initiatives and movements that encourage nation-building, unity and political participation.

They are creative, intelligent, passionate and, most important, patriotic. These young Malaysians have taken on the challenge to drive the nation forward, and they’re doing it with some fresh, amazing ideas. Here are some of their stories.

In 2010, a group of friends organised a focus group, during which they concluded that young Malaysians intent on starting nation-building initiatives rarely get the support they need.

“So, we felt what was needed was an independent platform ... not one regulated by the Government,” said myHarapan CEO Nurfarini Daing.

The result of that aspiration was the birth of the aptly-named NGO myHarapan, which aims to help youths drive initiatives on their own.

“We advocate social entrepreneurship. It’s really about creating the right mindset,” said Nurfarini. “We get them to do projects on their own and facilitate the process, instead of spoon-feeding them.”

To do that, myHarapan provides engagement programmes, organises workshops, provides content and offers grants, among other things. Simply put, they act as an “accelerator” to get determined young people to work on their ideas. Hope for Malaysia: Established in 2010, myHarapan's main goal is to promote social entrepreneurship by providing opportunities through engagement programmes, workshops as well as offering grants.

In fact, those hoping to kick-start their projects can opt for one of two grants by myHarapan – The Youth Action Grant (which offers up to RM15,000) for one-off projects, or the Social Venture Fund (which provides up to RM250,000) to establish organisations with long-term plans.

On top of that, myHarapan also provides ample opportunities for young people to share and pitch their nation-building ideas to a global audience.

One example is the ongoing Social Business Challenge. This competition, to formulate project ideas designed to address and alleviate poverty in urban communities, is open to those aged 18-35.

The winning ideas, besides earning start-up funds, will also be sent to this year’s Global Social Business Summit (GSBS) in Mexico, where opportunities for them to grow are aplenty.

“GSBS is the biggest social summit in the world right now. It brings together all the big shots in the industry interested in pitching good social business ideas,” said Nurfarini. “Through this, we’re also trying to showcase Malaysia on the global stage.”

Last year, the fifth edition of GSBS was held in Kuala Lumpur, the first time the event took place outside of Europe – thanks to myHarapan.

“It was a big achievement for us,” said Nurfarini. “It can be hard getting funds. But after hosting the GSBS last year, there has been a lot of local interest in social entrepreneurship.

“I think social entrepreneurship has become very trendy now. In the future, it will be something people really look out for in terms of running businesses.”

Next year, myHarapan hopes to continue promoting social entrepreneurship internationally, by including it in the agenda at the ASEAN Summit here in Malaysia.

Political awareness among young people has certainly increased over the past few years, and with that comes a desire to make a change. But change cannot happen without an understanding of the fundamentals behind policies, right?

Understanding our constitution, however, can be pretty difficult for the average person. Enter MyConsti. First formed by the Bar Council in 2009, it aims to educate citizens – especially those aged between 15 and 35 – on the Federal Constitution, and the law in general.

“Lack of knowledge and understanding on the law particularly the Federal Constitution often leads to misinterpretation and misinformation,” said Firdaus Husni, chairperson of the Bar Council Constitutional Committee (BCCC). 'In the course of our campaign, we have met many youths who are enthusiastic to do their part for nation building,' said Firdaus Husni, chairperson of the Bar Council Constitutional Committee, which formed MyConsti in 2009.

“That’s why we spearheaded MyConsti – to bring the contents of the Malaysian Federal Constitution to all Malaysians in a manner simple enough for the public to understand and appreciate without compromising the substance.”

To reach out to the youth, MyConsti produced a series of public service advertisements (called Rakyat Service Advertisements, or RSAs), and guides (called The Rakyat Guides) based on nine main themes they identified within the Federal Constitution. They’ve also run a series of public forums, conducted television and radio interviews and written articles – all based on the constitution.

On ground, MyConsti has developed and run workshops, mostly in partnership with school and college students, NGOs and even churches. And in keeping with their aim to educate the youth, they’ve even held two concerts called Rock 4 Rights.

These efforts were not just contained to urban areas, either. MyConsti has also organised trips to orang asli settlements.

She also added that the constitution has been amended several times, which shows that change is possible for the young people of Malaysia.

“But first, they need to arm themselves with knowledge. How can we protect the Federal Constitution if we don’t even know what’s in it?” 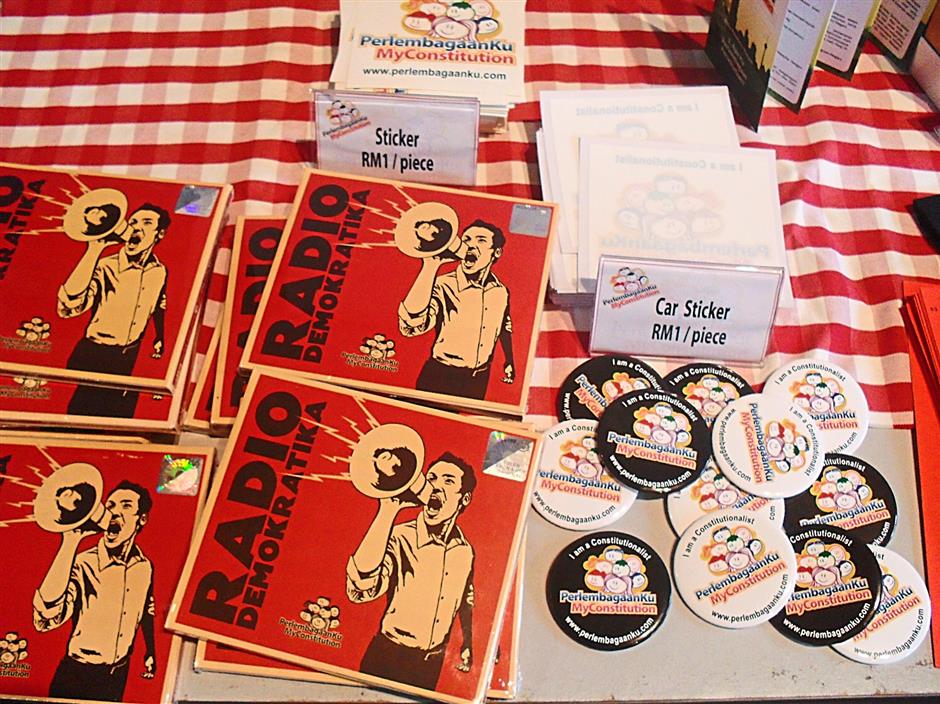 On top of their on-ground activities, MyConsti, which targets Malaysians aged 15-35, has also produced a series of guides and public services announcements (which they call 'Rakyat Service Announcements') on the constitution.

Firdaus’ hope now is for the people to take ownership of MyConsti, and help spread its message throughout the country.

“Get a copy of our Rakyat Guides,” urged Firdaus. “Read them and pass them on. Organise a MyConsti workshop in your area.” She promised they would be there, once told of the time, venue and date of the workshop.

You can also join MyConsti for free! Just send an email to perlembagaanku@gmail.com and complete the registration form, and you’ll be on your way to helping spread sorely-needed knowledge to your fellow countrymen.

“In the course of our campaign, we have met many youths who are enthusiastic to do their part for nation building. Seeing them never fails to inspire the MyConsti campaigners to do more. It tells you that there’s hope for the country,” said Firdaus.

If you’re talking about getting young people involved in nation-building, there’s probably no better way to do it than to actually stick them straight into the Government – which is exactly what the Perdana Fellows Programme does.

Through the programme, the country’s brightest young minds get to apply to be interns under Cabinet ministers for a period ranging from six weeks to six months.

This means the youth won’t just get a chance to learn, but also have their voices heard by the people who run the country.

In the two years since it was initiated, the programme has given 70 future leaders the chance to learn, first-hand, the ins and outs of policy-making and ministerial administration. Perdana Fellow Victoria Cheng (third from left), 22, during the Perdana Fellows Programme handover ceremony, where she was assigned to Minister in the Prime Minister's Department Datuk Paul Low.

“The Perdana Fellowship Programme helps bridge the gap between the government and the youth, making both parties better informed of each other. This way, the youth will have a well-rounded understanding of issues and know not to criticise policies blindly,” said University of Nottingham undergrad Victoria Cheng, 22, who is currently a Perdana Fellow under Minister in the Prime Minister’s Department Datuk Paul Low.

University of Warwick student Muhammad Mikhail Rosli, 21, who worked with Second Finance Minister Datuk Seri Ahmad Husni Hanadzlah, said one of the most important things he learnt was how tedious and complex policy-making can be.

“I’ve learnt that the recurring criticism that governments are slow to implement things disregards the need to be careful when exercising government functions.

“Most people do not consider the trade-offs involved when good policies are politically unattractive, or the wide gap between planners and implementers,” he said. 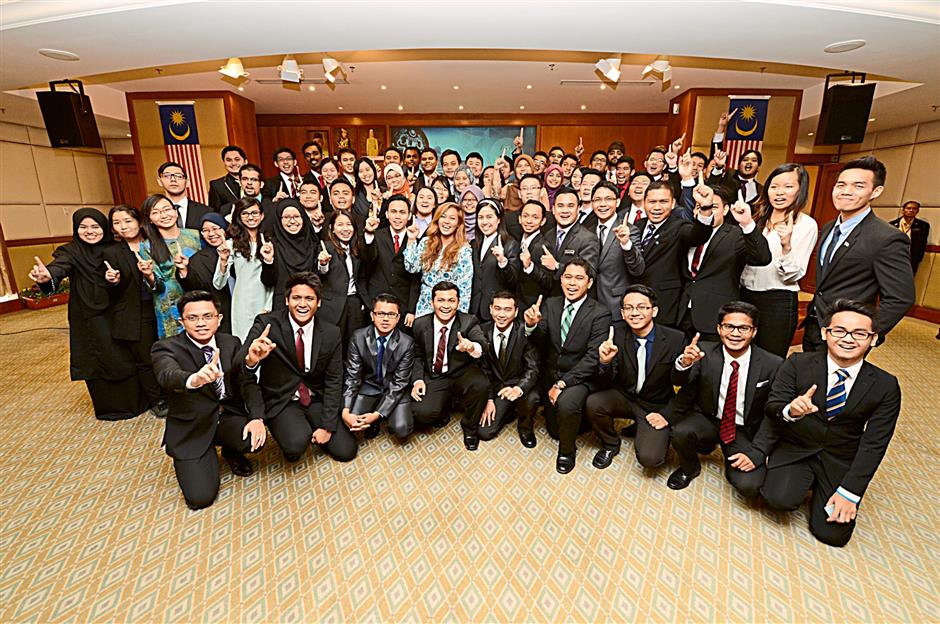 The candidates for the 2014 Perdana Fellows Programme, which gives bright young Malaysians the chance to work with Cabinet ministers as interns.

In an earlier interview with The Star, Perdana alumnus Hafiz Ariffin, 25, confessed that he had underestimated the amount of work a Prime Minister had until he was placed under Datuk Seri Najib Tun Razak himself.

According to Mikhail, some people tend to be quite sceptical about the motives behind the programme; but his personal experience as a fellow was very positive.

“I think it has given urban youths, like myself, the opportunity to experience first-hand this distant and controversial figure we call ‘the Government’.

“The programme does not breed (negative) ideologies but instead gives direction for more informed conversations among the youth,” said Mikhail.

Cheng believes the programme serves as an effective awareness platform and encourages Malaysian youths to get involved.

“The most crucial aspect of this programme is having the government opening itself up to the people,” she shared. “I also see youths becoming more proactive and passionate about public policy and civil welfare. More of us are actually involving ourselves in concrete ‘servanthood’ activities as opposed to just making noise on social media and the blogosphere.”

Other initiatives you can check out today:

A voter education platform for young Malaysians. We need to learn and be involved in the democratic process all the time – not just during elections!

An organisation that does, well, random events to bring Malaysians together, like the KL Freeze In Unison “freeze mob” and World Pillow Fight Day.

Y.O.U. is all about bringing young Malaysians from all walks of life together through fun events that have a good cause.

An initiative that recruits young volunteers to pack and distribute free nasi lemak to the homeless. They have expanded to provide free tuition too!

Founded by John-Son Oei, who was one of the young people behind the Voice Your Choice young voter registration campaign. He now gathers volunteers to build homes for the orang asli community through EPIC Homes.

MAAP proves that nation-building can happen even among young Malaysians overseas. The alumni organisation for students of exchange programmes funded by the United States government runs projects in education, entrepreneurship, youth empowerment and policy-making.

It’s exactly what it’s name says it is – an academy to develop young Malaysian leaders, so they can help lead the country forward by being involved in policy-making.