A zoologist talks about life among the wilds

By LIM CHIA YING
Dr Lim Boo Liat and the plaque of the Merdeka Award 2013 (environment category) which he recently received.

We are in the study room, surrounded by shelves lined with hundreds of books, when zoologist Dr Lim Boon Liat shares a “disconcerting” revelation.

“I think I have caught and examined no fewer that 20,000 rats in my life,” he declares in a nonchalant manner which will supposedly allay one’s disdain for the rodents.

Still, rats? I heard myself yelp inside.

For most people, rats are filthy, disease-carrying pests. Yet for the hale and sprightly 87-year-old, research work means that he has been in contact with rats throughout his career which spans over 60 years. Be it field rats, house rats or forest rats, Lim has trapped and brought them back to the lab for experiments.

“Rats are very intelligent species. If one or two of their group members have been poisoned by something they ate, the rest will never go near it. Hence, it’s difficult to eradicate rats,” he shares.

He also studies small mammals like bats and squirrels, as well as reptiles and amphibians. Through his extensive research and field work, he has been able to ascertain these animal numbers in our country, which put in perspective the nation’s rich biodiversity – 25 species of rats, 25 of squirrels, 18 of fruit bats, over 100 of insectivorous bats (which only prey on insects), and more than 100 of snakes .

“I have dissected and examined between 30,000 and 40,000 animals in my years of research. It is important for us to gather an extensive specimen pool in order to accurately pin down the smallest of details, like the teeth in a different order, that would differentiate a species. Research work is interesting as it resembles very much a detective job where you are always looking for evidence. I learnt early on that you have to work hard if you want to become a good scientist.”

And a good scientist Lim eventually became. For his six decades of outstanding contribution to the conservation of Malaysia’s biological diversity through the study of vector-borne diseases as well as the relationship between diseases and the environment, he was recently presented with the 2013 Merdeka Award in the environment category.

“I’m very lucky to receive it,” he says humbly. “It’s such a prestigious award in Malaysia. I was asked by the secretariat to apply, never expecting to be chosen.”

Lim’s humility shines most through his generosity in imparting and sharing his knowledge on mammals, parasites and ecology. Though long retired, he continues to be active in the field by volunteering his time – he is honorary consultant on zoology for the Wildlife and National Parks Department (Perhilitan) and also mentors young scientists and edits their scientific papers.

“I prefer training young scientists, which is what I’ve been doing for the last 20 years. It’s my duty to see that they have publications to their names, which are crucial to their careers.”

His self-effacing demeanour is reflective of his upbringing – he had to help support his family early in life, and the gratitude of having earned his Masters and PhD despite only finishing his lower secondary schooling (Junior Cambridge).

Born in 1926 in Klang, Selangor, he was exposed as a child to the outdoors through nature lessons in schools where he collected plants and insects. While it cultivated a naturalist streak in him, it was only during the war years that he began to take more interest in animal life.

The onslaught of World War II disrupted his studies, so he was forced to work odd jobs to help put food on the table. His enterprising spirit took him to Carey Island in coastal Selangor, where he set up a factory to produce salt from sea water harvested from the Straits of Malacca. While staying in Carey Island, he met orang asli villagers who taught him how to identify different animals, which they hunted for their livelihoods. He closed his factory when the Japanese surrendered and returned to his family home in Klang. Armed with newfound know-ledge on animals, he soon got a job as lab assistant at the Institute of Medical Research (IMR) despite not having sufficient academic qualifications. 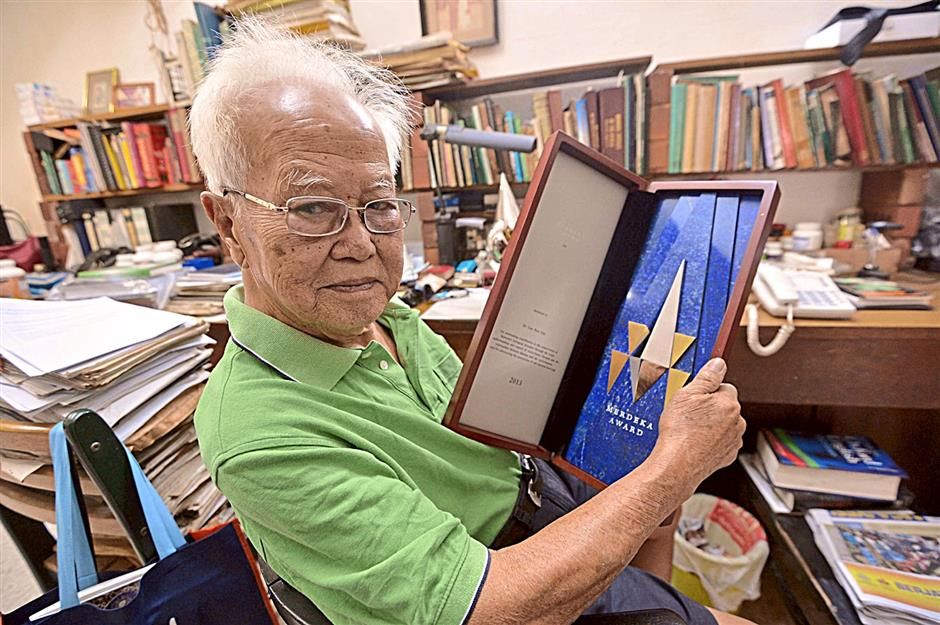 Dr Lim Boo Liat and the plaque of the Merdeka Award 2013 (environment category) which he recently received.

His first assignment was to research on the scrub typhus disease, carried by mites (the vector) from rats (the reservoir host) that reside in scrub areas. That marked the start of his lifelong “affair” with rats. “There was an outbreak of the disease in the Burma War, which killed many Allied and Japanese troops. Scientists were sent there to investigate these deaths and I was given the task of collating the findings for a database, which got me into rat trapping and catching.”

His job involved travels to South-East Asia to study small mammals and parasites, and he eventually took on the position of head of the medical ecology division at the IMR.

In 1967, Lim developed the concept of “ecological labelling” by parasite pattern, now widely-accepted by animal behaviourists and mammalogists globally. It was an accidental discovery, he says.

“I used to keep a moonrat (an insectivorous mammal) inside a cage and an aquarium of freshwater fish next to it in the lab. One day, I realised that my moonrat had disappeared, and all my fish were gone too. I realised that the moonrat had broken open its own cage, jumped into the tank and ate them all. Its webbed hind feet makes the moonrat semi-aquatic in nature. So I fed it with fish bought from the market, which it survived on for 15 months.

“Though the fish kept it alive, I needed to determine if the moonrat indeed feeds on the same in the wild. This was how I came to study endoparasites (internal parasites) and found the parasites in the moonrat to be fish parasites. This lends confirmation to my experimentation and observation that endoparasites are good indicators for ecological labelling, as they take you to the environment and habitat of the animals. Those days, trapping the moonrat was difficult but we are now able to trace its locality,” explains Lim.

With rats, he also studied the lungworm, a project that he spent 10 years on. The lungworm is found in the lungs of rats. Its third-stage larvae can be transmitted to humans through consumption of food and vegetables contaminated with rat faeces that have been picked up by snails or slugs.

“The larvae will drift with the bloodstream up to the human brain where they live for 18 days, before moving to the surface to feed on the brain’s membrane … which is when the damage is done, causing the person to die if the infection is heavy.”

In 1969, he obtained a Medical Research Council Fellowship to do his Masters at the University of Aberdeen, Scotland. He returned to IMR three years later to the post of zoologist, and later did his Phd at Universiti Sains Malaysia, Penang.

“I believe my many paper publications helped me gain acceptance into Aberdeen,” he shares, pointing out that he had little paper qualifications to justify a post-graduate entry.

To date, he has written over 300 scientific papers on small mammals, rodent control, amphibians, reptiles and host-parasite relationships in local and international journals as well as written two books and co-authored three.

In 1977, he was seconded to the World Health Organisation to head the vector biology control research division in Jakarta, and then its research planning and manpower development programme. He was there for 10 years.

Lim’s list of credentials is testament to a lifetime’s worth of achievements. The Merdeka Award aside, his list of accolades includes the Ahli Mangku Negara (AMN); the Sandosham Gold Medal 1978 by the Malaysian Society of Parasitology and Tropical Medicine; the Science and Technology Award 1995 by the Malaysia Toray Science Foundation; honorary membership of the American Society of Mammalogists in 2003; elected fellow of Akademi Sains Malaysia in 2007; and the Spallanzani Award 2007 by the North American Society for bat research.

His active voluntary work sees his involvement in the Malayan Nature Society (helping with its revival in 1947), the Society of Templer Park and assisting in the establishment of Zoo Negara. Then, there’s the important Red List of Mammals of Peninsular Malaysia publication that he contributed to.

Published by Perhilitan in the late 1990s, it took him a year to compile the conservation status of 288 species.

“It is important for us to have our own list that registers the common species, uncommon species, rare ones, their behaviour and habitat, as what is considered rare in the international list may not be so in Malaysia.”

He says animal study is an interesting field with much to learn and take from, and from which interpretations can sometimes be made about humankind’s actions. Animals, too, are excellent indicators of environmental health by virtue of their migration behaviour.

“I’ve always believed that we should never try to behave like we know everything, no matter how good we are. There’s no harm in getting a second opinion, being less territorial in our area of research, and collaborating more to produce outstanding work that will benefit the industry,” he says.

> The founding partners of the Merdeka Award are Petronas, Shell and ExxonMobil.

A zoologist talks about life among the wilds