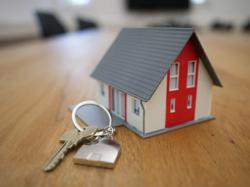 This exceptional house would have been built in 1865, half a century after the Brothers Grimm published 'Hansel and Gretel'. Photo: AFP

London is full of atypical buildings that are worth checking out. One of them has just appeared on the market.

It is a residence in the regency style, and it looks just like a gingerbread house!

The property in question is located in the East Sheen district, not far from Richmond Park, the largest green space in the English capital.

The 194.26sq m (2091sq ft) house stands out in the London architectural landscape with its pointed roof, rust-coloured bricks and above all, its decorative white friezes with scalloped edges.

This makes it a unique home, according to Sophie Barton, sales manager at Savills East Sheen estate agency.

"There aren't many homes in the capital that epitomise festive cheer quite like this lovely original Victorian coach house," she told trade magazine Mansion Global.

This exceptional house was built in 1865, half a century after the Brothers Grimm published Hansel and Gretel.

This children's story played a role in boosting the fame and popularity of gingerbread houses beyond the borders of Germany, where they were invented.

The original gingerbread houses were inspired by the colourful houses in the picturesque town of Dinkelsbuhl in Bavaria. But the "gingerbread house" in East Sheen is much more modern – and well equipped – than that in the Brothers Grimm tale.

It has four bedrooms, a 55.7sq m (600sq ft) living room with a large fireplace and a sitting area that the current owners have converted into a private movie theater. In addition, there are two large outdoor areas, one of which is used as a parking lot.

However, be prepared to pay a pretty price if you want to treat yourself to it for Christmas: this festive home is listed for sale for £2.95mil (RM13.6mil). That's significantly more than the £700,000 (RM3.2mil) it sold for in 2020, according to information from Mansion Global.

At that price, it may be better to make one yourself with flour, eggs, butter, sugar, honey and, of course, a whole bunch of spices if you have a craving. – AFP Relaxnews