The key to living in harmony is learning how to sing your neighbour’s song, according to Benedict Lo, teacher and choir conductor at St Joseph’s Private School (SJPS) Kuching, Sarawak.

“Everyone can sing a song, but do you know your neighbour’s song?” he asks philosophically. “Have you learnt how to sing their song? If we all learn to sing each other’s songs, then we are bound to make a better Malaysia... a better world.”

Lo, a passionate believer in the transformative potential of music, has been coaching the SJPS Chamber Choir for close to six years now. In that time the choir has gone from strength to strength, clinching numerous accolades.

Just last month it picked up the Gold Award for the Virtual Choir category at the 11th Bali International Choir Festival (BICF) with the winning choral performance of Malaysian folk songs Rasa Sayang and Lenggang Kangkung.

Prior to this win, the choir also won the Gold B Award in the Pre-record (Teenage Category) and came in first runner-up in the Teenage Youth Choir Category at the National Choir Competition, organised by the Malaysian Choral Eisteddfod.

For the moving BICF virtual performance, the students were dressed in a variety of traditional outfits, including Malay, Chinese, Indian, Kenyah, Iban, Melanau, Bisaya and performed the songs with a few traditional Orang Iban and Ulu movements, all of which will inspire a warm, patriotic feeling in anyone watching.

“It was one of the students who came up with the idea to include all the different traditional costumes,” shares Lo in a Zoom interview from Kuching.

“Often I try to get the students involved. I pick their brains for ideas, so they can feel ownership over the projects that we work on.” 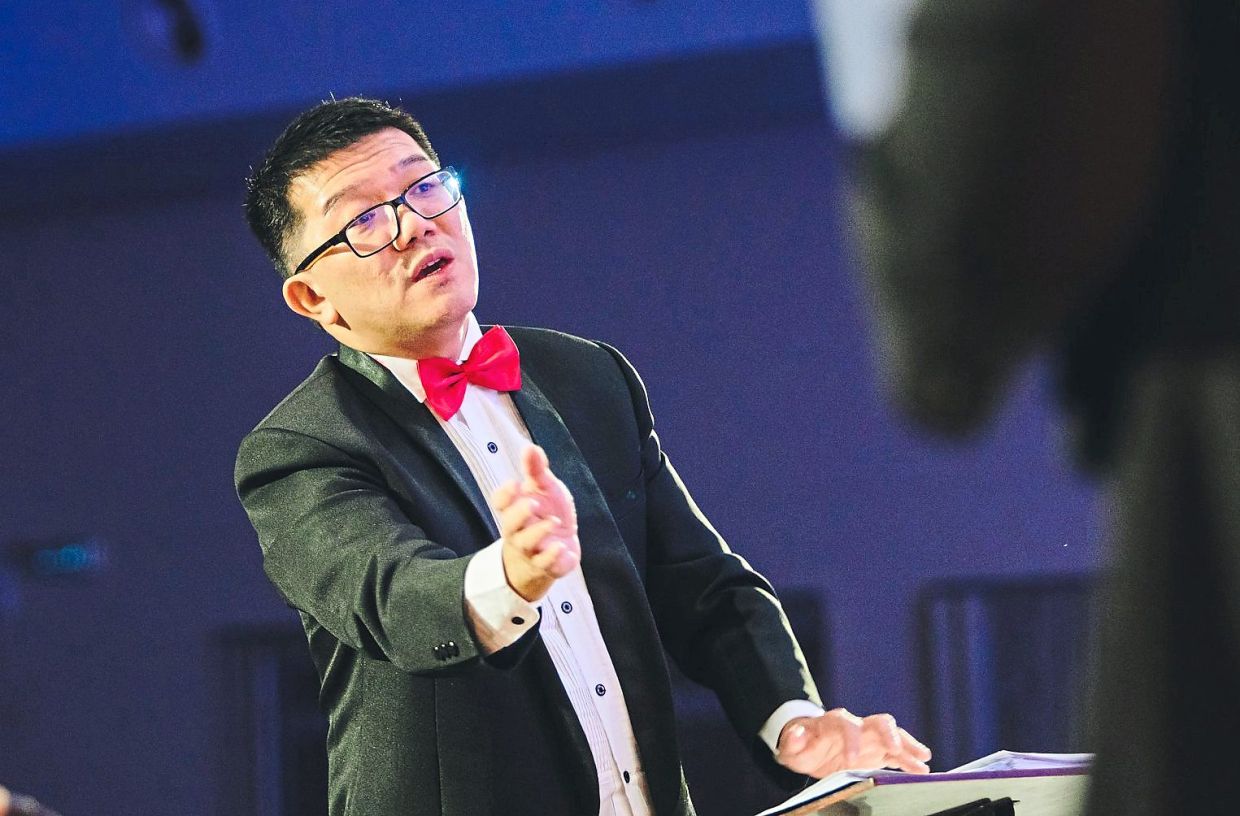 Lo is a passionate believer in the transformative potential of music.

Lo says that the idea for the costumes sounded good until they actually tried getting them!

“Then it turned out to be a real nightmare because it was so difficult to loan the items, as many of these costumes are family heirlooms and people tend to be extra careful with them. Thankfully in the end, we managed to get more than 10 different costumes and everything looked really good!”

The songs were filmed on the grounds of the Sarawak Museum and Museum Garden in Kuching, which Lo explains is significant in the history of the local performing arts.

The famous Sarawak Constabulary Band used to play at the bandstand in the Museum Garden on the weekends in the 1960s, and it was a tradition for Kuchingites to visit the garden and listen to these musical performances.

‘A great promoter of culture’

Lo enjoys incorporating this sort of history into his choir coaching sessions.

“I am a great promoter of culture,” he says. “I believe to really understand where we come from, we need to explore our roots and heritage. When I teach the choir a particular song, I want them to know its history. When we get back in touch with our roots, and stories from the past, we start to fall in love with the culture, and that blooms into a love for our nation.”

Music, he says, is a great way to introduce this learning and love for culture.

“Malaysia is made up of so many people, cultures, races, religions, all in this one big melting pot. It’s so colourful and bright,” he says. “There are a lot of beautiful things in our own backyard. Instead of always looking on the outside (like K-pop, he says jokingly) it’s time to look inwards where there’s so much to appreciate.”

The SJPS Chamber Choir strives to enhance the choral experience among young people with the hope of building a sense of belonging and community spirit. 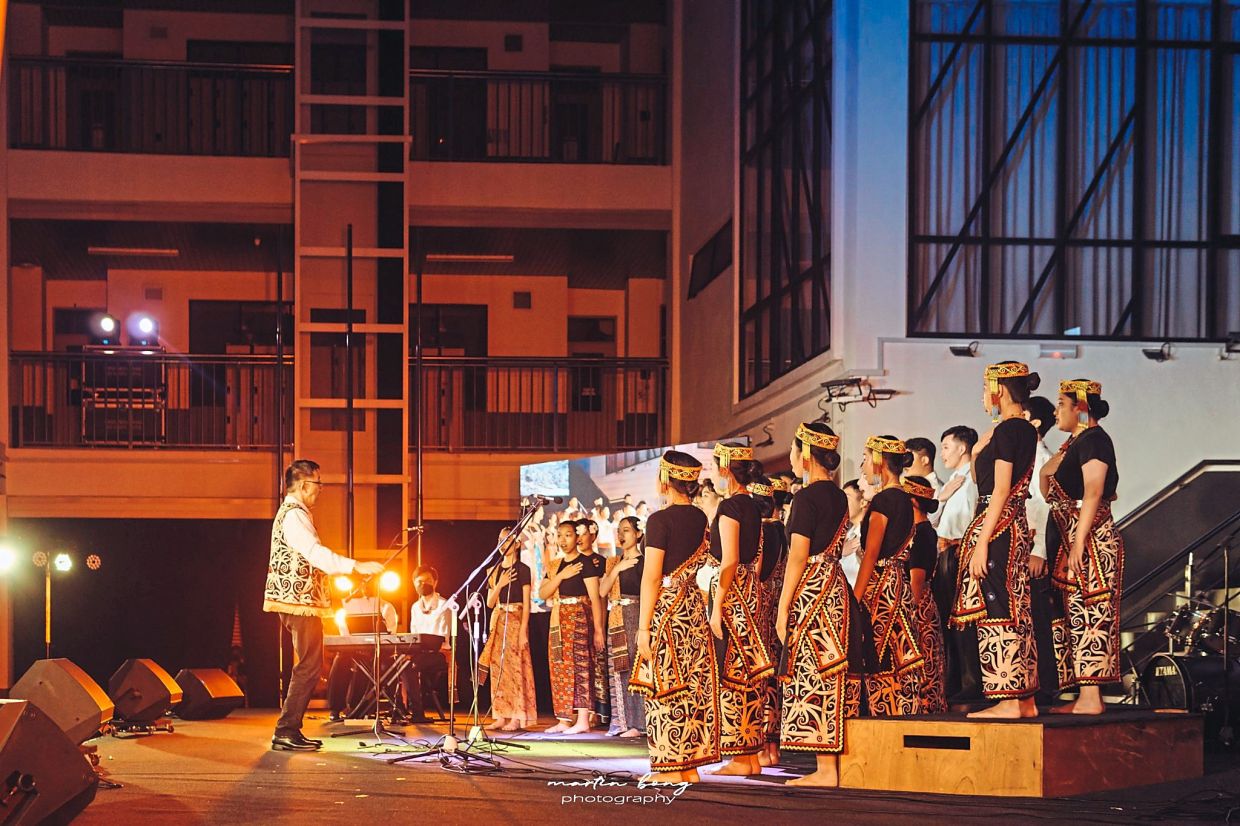 By joining the choir, students learn the value of being in a community. Photo: Martin Bong

The close bonds felt among the members come from the opportunities they have to enjoy doing something positive, learning discipline and leadership, but most importantly, having a voice to contribute to the community in special performances and fundraising concerts.

“The children learn how to work together, and how to care for each other. They learn the value of being in a community versus individualism. Singing together requires understanding balance and blending.

“Sometimes one needs to be loud, sometimes soft, sometimes you get a solo spot and at other times, you need to support someone else. You come to a realisation that you are not alone. You’re in a group that’s travelling in one direction. We are all heading towards the same goal,” Lo offers.

Lo, 47, grew up in Kuching and went to further his education in architecture at the University of Western Australia in Perth. After working as an architect for 15 years, he took time off to go to the Philippines to do his Masters in Sociology.

“When I returned, I changed paths, mostly because of my faith, and ended up becoming a Bible Knowledge teacher at SJPS!” he shares. “I had always been very involved in music from a very young age, conducting church choirs and working with youth ministries.

“So when I came to the school, the principal offered me the job of coaching the choir and this was a nice opportunity for me to work with the young people doing something I was very passionate about.”Even while he was in Perth, Lo took part in the Undergraduate Choral Society there, and would attend masterclasses and conducting classes to upgrade himself.

He remembers coming home after graduating, and making a trip that really blew him away to Ulu Belaga, a district in Kapit, just outside of Miri.

“Hearing the folks in the longhouse there singing was such a soul-stirring experience ... Those sounds and images will stick with me for the rest of my life. It is what I try to replicate today with the choir, in a different, more modern and choral way.” 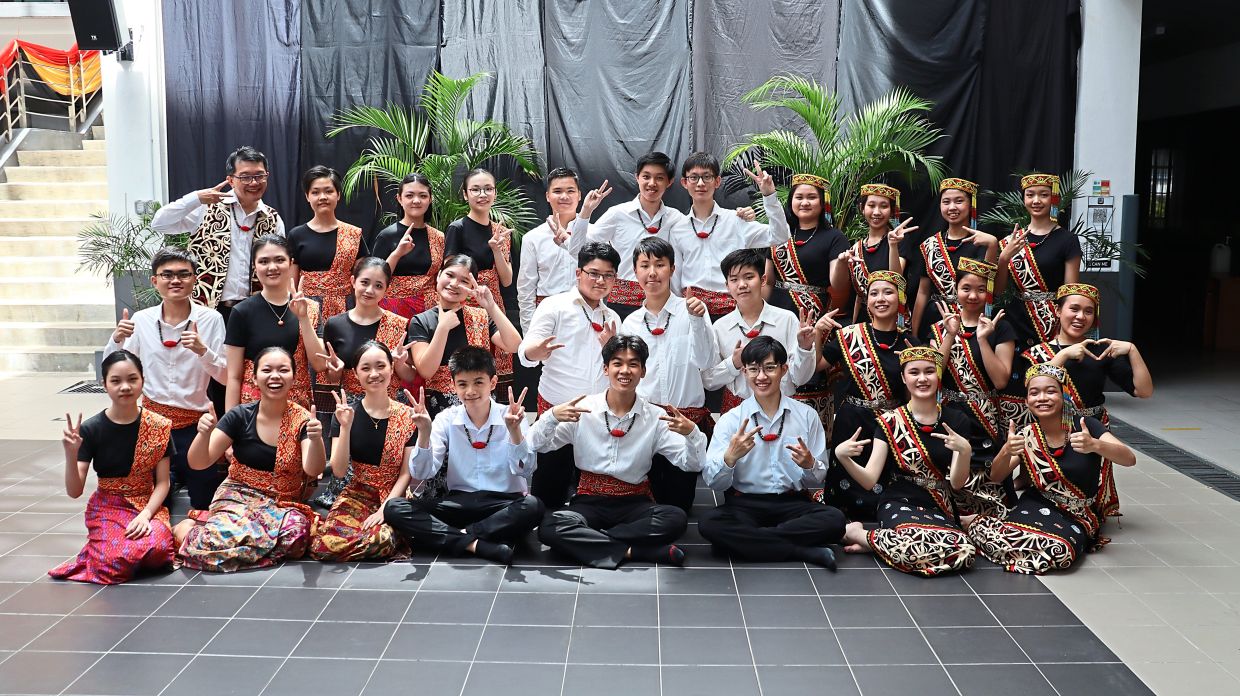 The SJPS choir has grown from strength to strength, clinching numerous accolades.

An ardent fan of Datuk Sheila Majid, musicals and classical music while he was growing up, Lo at some point fell in love with the works of Dr Chong Pek Lin.

Chong is a music educator and researcher who is interested in the folk songs from Sarawak, especially the Kenyah community, who are famously creative and have traditional instruments that have become popular in the last decade or so, including the sape, lutong and keringut.

“I began following her work and still find it really fascinating,” he reveals.

“The Kenyah community does a lot of harmonisation in their singing. There is a beauty in it which you can only understand when you sing it or hear it yourself. And the children have somehow started to enjoy these songs.”

In 2020, the SJPS Chamber Choir won the Gold Medal at the 2nd World Virtual Choir Festival for its rendition of Lileng, a Kenyah folk tune with a contemporary choral arrangement by Lo based on the original transcription and translations of the song by Chong.

That year, the choir was up against choirs from 13 countries including Singapore, Indonesia, South Korea, China, India, Ghana, Italy, Britain and the United States.

This was also during the pandemic, and the students had to adapt to online meetings and rehearsals. It was no simple task but the strength of the choir’s commitment and resolution eventually earned the kids the top spot.

Lo cheerfully relates that this devotion was present right from the start.

“It was in fact the students who first asked me if the choir could take part in a competition, at which point I turned the tables on them and asked if they were ready to put in the commitment,” Lo says.

“If you are serious, you have to work hard. There will be sacrifices, there will be vigorous training .... are you up for it? And they all said yes!”

For its first outing, in 2018 the choir travelled to Singapore for the 11th Orientale Concentus International Choral Festival, and took home the Silver Medal.

“It was really an eye-opener for the students and ever since then they are always looking forward to doing something; they do a lot of charity performances and join different competitions to get more exposure as well as to learn.”

Since then, the choir has earned itself various other awards, including the Gold Medal at the Malaysian Choral Eisteddfod (2021) and Champion in the Youth Category at the Busan Choral Festival & Competition, South Korea.

At Busan, they sang a rendition of Ikan Kekek, a Malay children’s song from the peninsula that encourages one to be kind and work hard to succeed. One of Lo’s aims is that his students become well-versed in their Malaysian heritage and the songs of Malaysia so that when they go abroad they will be able to take those songs with them.

“I try to include many folk songs, especially Sarawak folk songs. But of course that is not going to attract the younger people so we occasionally have to sing ‘their’ songs as well,” Lo laughs.

Instead of resting on its laurels, the SJPS choir is already working on its next project.

“I am in the midst of transcribing another Kenyah song. There’s a programme coming up at the end of the year, the Sarawak International Festival of Music and Arts, and we plan to be there!” 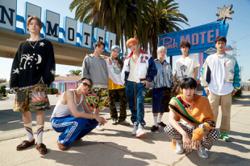