Band members (from left) Nor Hanafi, Din and Rich all agree that it feels great to lend a helping hand to the community. Photos: Estranged

When they began doing community work in 2018, local rock band Estranged’s band members didn’t expect the impact it would have on themselves.

The band’s contributions over the last four years have led its members Rich Gimbang, Nor Hanafi Nor Hadi and Din Hormatov deep into rural Borneo, opened their hearts and minds to new communities, and given them a chance to expand their horizons in positive new directions.

“It has made us realise the importance of community work. As a band, we have learnt that we wield a certain amount of influence when it comes to doing this sort of work,” says vocalist Rich, 40, who is from Sabah.

“It’s amazing that we have been able to use this influence to help so many people in need.”

The band’s initial project, mooted by its manager Mathew Thomas Philip, was a tie-up with Lightup Borneo, an initiative that offers electricity to off-grid interior rural villages in Sabah, Sarawak and Peninsular Malaysia.

“We decided to raise funds so they would be able to build a mini hydroelectric generator.”

Rhythm guitarist Din, 38, adds: “We’re musicians, so we don’t really have much technical knowledge when it comes to hydroelectric technology and such, but on our part what we did were tours, online shows, merchandise sales – from which a percentage went to these community projects.”

The band members all agree that it was a “great, great feeling” to see the villagers smile upon receiving the generators.

“What’s more is that after we installed a generator in one village, soon there were requests from neighbouring villages too. We knew for sure that the generators had brought a positive change, and were a welcome and happy experience for the kampung folk,” says Nor Hanafi. 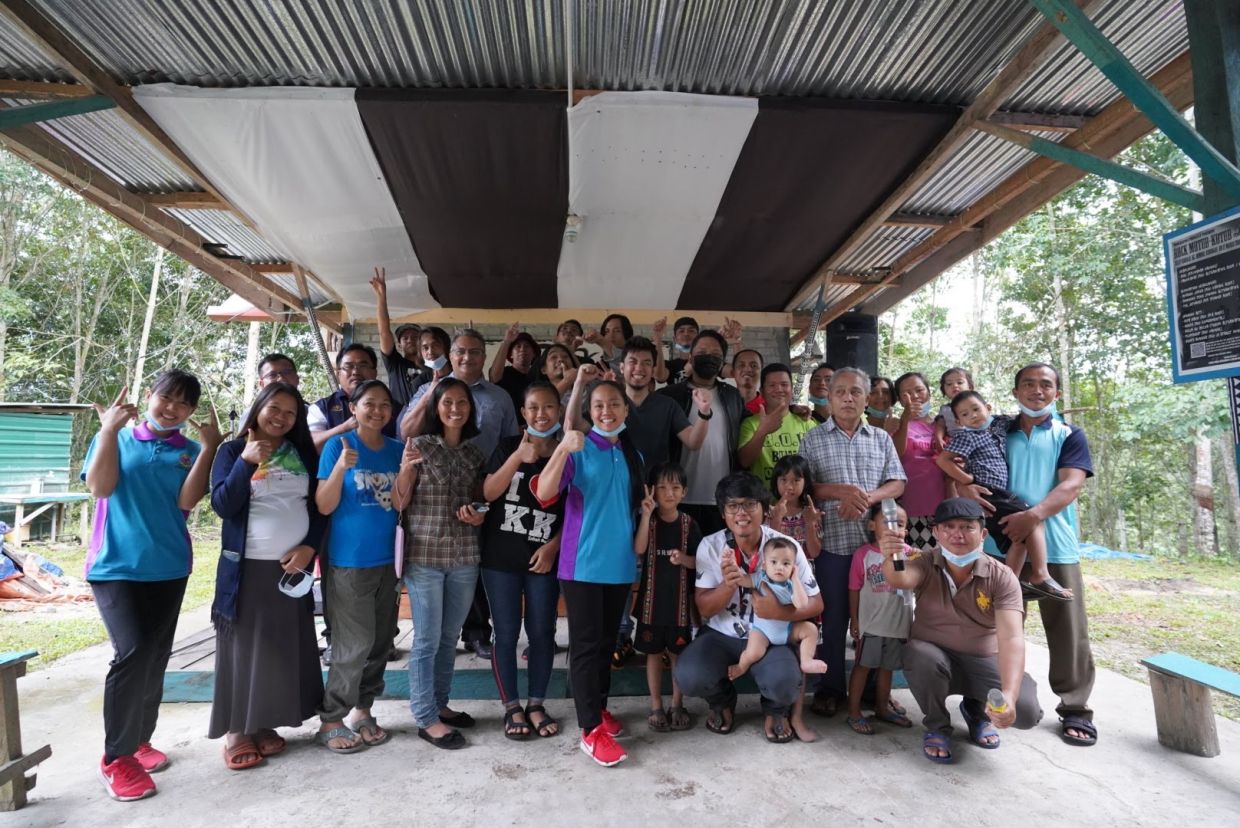 The band members with villagers at Kg Bomboi.

Estranged is not new to the scene. The band has been around since 2001, and has four studio albums and over 25 singles under its belt. Over the years, it has steadily raked up over 264,000 followers on Facebook, a sizeable following which was happy to support a good cause.

After Kg Paus, Rich, Nor Hanafi and Din continued with hydroelectric projects in Kampung Koiyep (Ranau) and Tuaran in Sabah, in 2018 and 2019 respectively.

Din says: “Most of these kampungs, memang betul-betul dalam (are really remote), and even some of the locals didn’t know about them when we told them we were going there!”

With the mini hydroelectric generators, these villages now have free access to sustainable, renewable energy 24/7 because their generator is powered by flowing water from nearby rivers.

These generators are able to provide light, and villagers are able to charge their phones, which provide a line of communication with the outside world.

Nor Hanafi says that before the hydroelectric generator was installed, the village children found it challenging to study after the sun had set each day.

“One of the ketua kampungs’ (village chief) children told us that when she studied at night with a kerosene lamp, it would be normal for her to have a black soot ‘moustache’ on her face in the morning!” 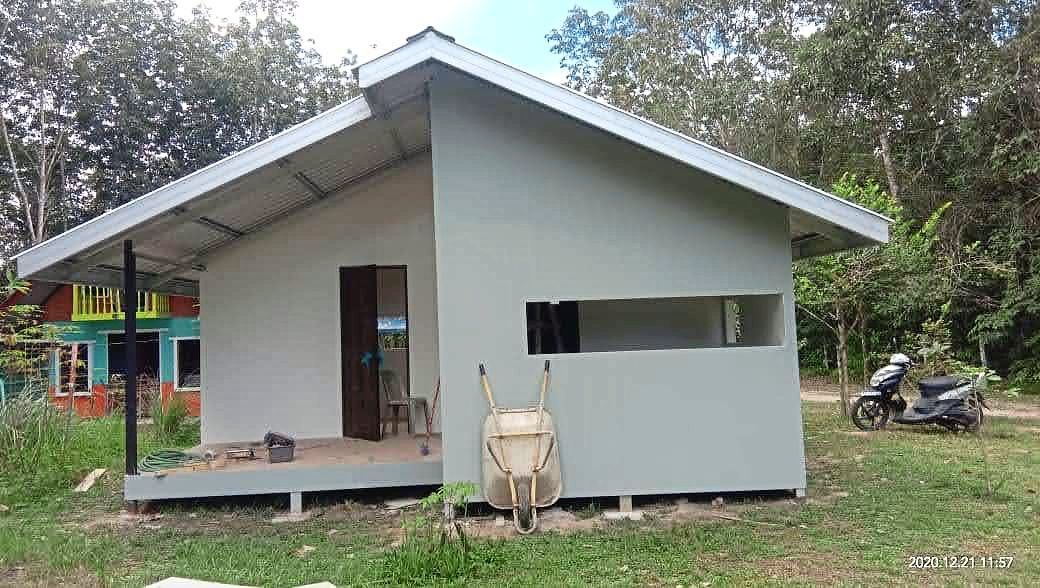 The Sulap Estranged Internet hub in Kg Bomboi, which is being used actively by students and kampung folks.

The band remembers the projects as being joyous experiences.

During the initial launch at Kg Paus, Estranged even performed for the village on the night it had light for the first time!

Nor Hanafi recalls how the faces of the villagers were all aglow.

“I think the best experience for me, after wrapping up that project, was to makan sekali (eating together, family style) with all the people of the kampung,” he shares.

“It was a learning experience for us. We had seen how they would eat at night in darkness. So when there was light it was really a special time.”

Din also points out the generosity of the villagers when it came to the communal mealtime.

“They made linopot for us to eat. It’s red rice (made from beras bukit) and they wrap it in a leaf. And they brought out all their chickens for us. It’s different in the kampung, the community is smaller, but they are not calculating when it comes to sharing food.”

Nor Hanafi adds: “We met the elders, the youths, everyone, it almost felt like balik kampung for us even though we were total strangers, and couldn’t even speak their language (Dusun).”

Each project costs approximately RM50,000 to be able to power up to 40 houses. The band is grateful that it was able to contribute, raise awareness and get the funds needed in the past few years, even when times were bad.

Just last year, another 5kw pico hydro power plant was installed in Kampung Tinanom in Ranau, to benefit 22 families there. And it hopes to next install a power plant in Long Presek, Ulu Limbang, Sarawak. The band and friends of the Internet project of Kg Bomboi standing outside the newly built hub.

Humbled by the experience

Rich says that being able to give back to the community is a privilege the band doesn’t take lightly.

“Being recognised and able to contribute to causes like this is a true honour for us. We are humbled by these opportunities that have come our way.”

When the pandemic struck in 2020, Estranged was just about to embark on a roadtrip to take its music across Borneo. Things quickly changed and their plans had to be put on hold.

But these boys were not content just sitting at home and waiting it out. In the last two years, they have released four singles – Endless Dreams, Tujuan, Main Bubut and Tari Sumazau.

During this time, they were also moved by reports about children in Sabah living in rural areas who were having a tough time keeping up with their studies online because of spotty telecommunication access, so Estranged decided to launch into action again.

In 2020, Estranged partnered with Telekom Malaysia to set up an Internet hub at Kg Bomboi in Keningau, Sabah. Rich and Salomon Gau in Miri playing the jatung utang for the documentary series 'Roads To Our Heritage'.

Nor Hanafi says: “We heard that the students really needed Internet access, and we tried to contact our sources as well as TM directly.

“It just so happened that TM at the time was also expanding and installing Internet connections around Sabah in its Jendela (Jalinan Digital Negara) project, but it had a priority list to follow. So we started lobbying for Kg Bomboi.”

Estranged’s management had come to hear of the plight of the students in the village from an appeal from one of its residents, Rechellyna.

The band decided on a live-stream concert on Facebook, Double Trouble, to raise funds. It was a wonderful way to knit together something that they wanted to do musically, connect with their audience and bring focus to the plight of the village’s youth.

“We managed to raise about RM15,000 to build the hub which the students and the kampung people would be able to use,” Din says, adding that they visited the kampung a year later and were pleased to find that the hub, which the kampung folk call “Sulap Estranged”, was being used actively.

“You can see the students doing their homework there, and we were able to have a hangout acoustic session with them there, too.”

Since Malaysia began moving into the endemic phase, Estranged has been getting back into the swing of its music career, and putting finishing touches and wrapping up its last single for a new 10-track album, Sepenuhnya Vol. 2, as well as making final edits to the documentary Roads To Our Heritage.

The six-part documentary series sees Estranged, Sarawakian folk singer Alena Murang and Dr Nadia Widyawati from Conservatory of Music, Universiti Teknologi Mara (UiTM) travel across Sabah and Sarawak in search of traditional musical instrument makers, and learning the art of making the gambus, sompoton and sundatang in Sabah; and sape’, jatung utang and selingut in Sarawak.

While Rich is based in Sabah with his family (he is married to singer Velvet Aduk, and they have four children), Nor Hanafi (married with one kid) and Din (who has two cats) live in Kuala Lumpur.

“When it comes to songwriting, what we normally do is plan for some time away from everything – like in Port Dickson – and we just sit down and write, write, write,” Din says.

“Either that, or we go to Sabah, find a nice homestay in Tambunan (Rich’s hometown), and then we do some writing there and bring all the material back to KL to record.”

The band has made it a point to incorporate Borneo’s people, places, exotic musical instruments and unique culture in its music videos wherever possible.

“In one of our newer videos, Odoi, for example, there’s a shot in Tambunan during Kaamatan. We had to act out the motions of harvesting padi and it turned out to be quite an enjoyable experience and the scenery there was magnificent!” adds Din.

Estranged’s Endless Dreams video was made on the beautiful Sepanggar Island and features its aquamarine seas and white sandy beaches.

Two other videos Mari Sumazau and Main Bubut highlight traditional aspects of life in Sabah. Main Bubut is a game very much like Tag, while Sumazau is a traditional folk dance of the Kadazandusun people.

“As a band we have travelled to places like Ranau, Papar, Keningau, Tambunan and have been able to see so much of Sabah. It really has everything, from highlands and lowlands, to beaches, islands, villages and cities!” says Din.

He adds that they have focused a lot on Sabah to accommodate Rich.

“He wants to try and be more active in Peninsular Malaysia, but it can be tricky for him because of his commitment to his family.

“So our goal is now to promote a cultural exchange, and create awareness of what Sabah has to offer. Sabah never fails to surprise us ... we’ve been working and spending time there for many years now but we constantly discover new things! It’s always exciting.”

The divide that once existed between Semenanjung, and Sabah and Sarawak, for Din and Nor Hanafi is no longer there.

“Back when we first started out as a band, we did think of ‘Semenanjung’ as Malaysia,” says Nor Hanafi.

Din adds: “We had such little awareness of Sabah and Sarawak culture before this. Even back in school, we were only really exposed to Malay, Chinese and Indian cultures, and so we were never able to relate to life in Sabah and Sarawak.

“But our music has enabled us to go there and be a part of their lives, to learn from the people there and share with them. We are still learning ... but it’s been, and continues to be, a grand journey for us all.”

Estranged will be performing at the free “Spirit of Sabah 2022” concert held at the Kadazandusun Cultural Association Hall in Penampang tonight with 17 other artistes in celebration of Malaysia Day. 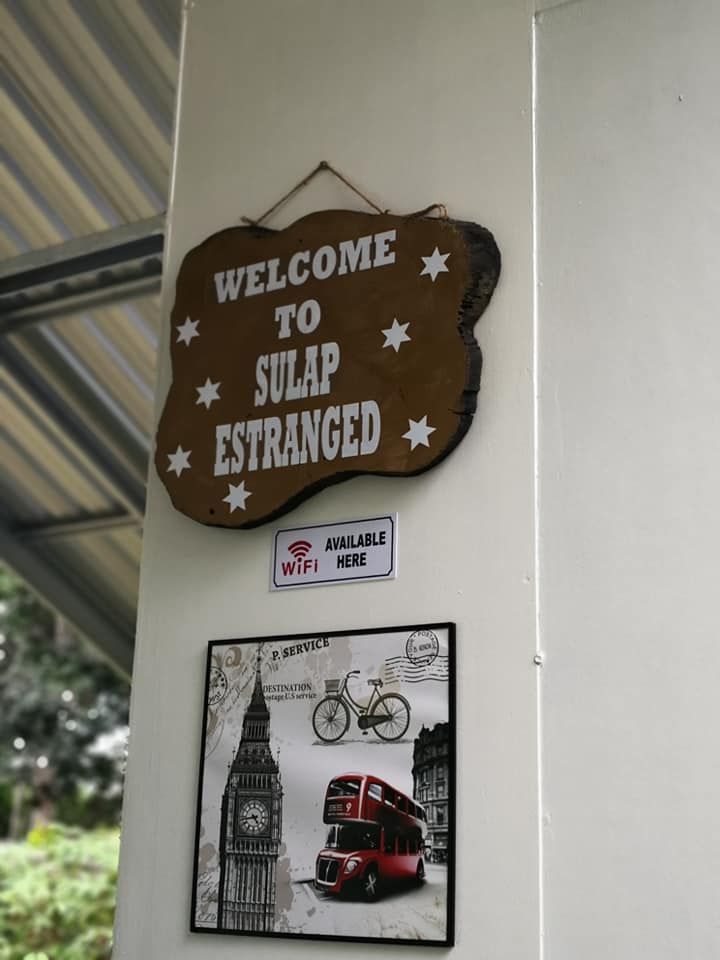 Band members (from left) Nor Hanafi, Din and Rich all agree that it feels great to lend a helping hand to the community. Photos: Estranged

Rich and Salomon Gau in Miri playing the jatung utang for the documentary series 'Roads To Our Heritage'.

The band members with villagers at Kg Bomboi.

The band and friends of the Internet project of Kg Bomboi standing outside the newly built hub.

The Sulap Estranged Internet hub in Kg Bomboi, which is being used actively by students and kampung folks.