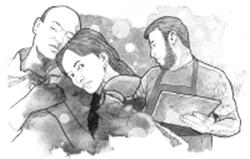 Much of California in the western US is currently gripped by excessive heat, severe drought and a series of massive wildfires. Photo: AFP

The world must prepare for a "climate endgame" to better understand and plan for the potentially catastrophic impacts of global heating that governments have yet to consider, scientists warned Tuesday (Aug 2).

Climate models that can predict the extent of global warming depending on greenhouse gas emissions are increasingly sophisticated and provide policymakers with an accurate trajectory of global temperature rises.

What is less well explored is the cascading impact of certain events, such as crop failures and infrastructure loss due to extreme weather events, which are made likelier to occur with every degree of warming.

Researchers at the University of Cambridge and the Potsdam Institute for Climate Impact Research (PIK) outlined what is currently known about "catastrophic outcomes" and found gaping knowledge gaps.

Writing in the journal the Proceedings Of The National Academy Of Science, they proposed an international research agenda to help governments plan for "bad-to-worst cases". These included four main areas of concern – what the authors termed the "four horsemen" of climate change: Famine and malnutrition, extreme weather, conflict, and vector-borne diseases.

"Irreversible and potentially catastrophic risks caused by human-induced climate change must be factored into our planning and actions," said Johan Rockstrom, PIK director and a study co-author.

He said that the more research is done on Earth's climate tipping points – such as the irreversible melting of the ice caps or the Amazon rainforest turning from a carbon sink to source – showed the ever-greater need to factor in high-risk scenarios into climate modelling.

"Key is to do the math of disaster, in order to avoid it," he said.

The authors pointed out that successive UN climate science reports have mainly focused on the predicted effects of 1.5°C to 2°C of warming and largely discounted the possibility of more excessive temperature rises.

Government plans put Earth on course to rise as much as 2.7°C this century, a far cry from the 1.5°C cap envisaged in the 2015 Paris climate accord.

The study suggested that a scientific disposition to "err on the side of least drama" led to a lack of focus on potential impacts at 3°C of warming or higher.

"This caution is understandable, yet it is mismatched to the risks and potential damages posed by climate change," it said.

In addition, risk assessments for so-called low-likelihood, high-impact events are notoriously difficult to accommodate in long-term climate modelling. The researchers calculated areas of extreme heat – with an annual average temperature of over 29°C – could cover two billion people by 2070.

They warned that temperatures posed a major risk of multiple "breadbasket failures" due to drought such as that gripping western Europe and heatwave such as the one that hit India's wheat harvest in March/April.

The team called for a special UN science report focusing on "catastrophic climate change scenarios" similar to its 2018 report on 1.5°C of warming.

"We have to get serious about understanding the profound risks that come with moving our planet into unknown territory," said Joeri Rogelj, director of research at Imperial College London's Grantham Institute, who was not involved in the study.

"Researching these extreme cases means that we'll be able to better prepare, including by being more serious about reducing emissions now." – AFP Relaxnews

How Seattle is building weather-predicting tech to spot heat waves