It is both a strange and funny sight to see when you notice that ball of fur you love so much sitting down to watch television with you in the evenings.

Perhaps you’ve noticed that your dog tends to watch TV even when you aren’t watching it yourself. They seem to be engrossed in the programming coming across the screen and will even turn their heads from one side to the other, seemingly following the action on the screen.

But are they really seeing what we are seeing? Are they just bored? How does a dog’s eyesight work in comparison to ours? Better? Worse? Let’s dig in to find out!

What do dogs see on the screen?

You aren’t alone in thinking that our dogs can’t be seeing the same thing that we are when watching TV but studies have shown that dogs do see and retain the images that are flashing across the screen.

They do see in a different colour scheme than humans do but they are still seeing the objects moving across the screen – hence the turning of their heads from side to side as they follow the figures.

The first thing that your dog to the television screen is, of course, the sounds. They hear different decibels of sounds than us humans do, and they tend to pick up nuances that we don’t.

They can hear the static in the stations, the level changes of the music, and even the starting notes of sound before we do. That is what draws them to the box that is producing these sounds and once they notice that there are pictures on the screen. Well, they like to hang out and investigate then!

How does a dog’s eyesight work?

Our eyes are made up of cells, muscles, and nerves that connect the eyeball to the retina so that we are able to see, process, and transmit images to our brains so we understand what we are looking at.

Human eyes tend to have what is deemed cone-dominated retinas that provide colour perception and detailed sight, especially in natural light. If we enter a dim or dark room, our eyes always need a minute or two in order to adjust and pick out vague shapes.

A dog’s eye has a different makeup than ours and they have what is deemed rod-dominated retinas. This means that their eyes have stronger eyesight in the dark as well as a better range of motion visibility than humans do.

Ever notice your dog might dart or bark at something in the evening that you weren’t even aware of while on that nighttime walk? And suddenly out pops a field mouse or other small creature from the bush? That is because your dog saw the movement in the dim light while you were oblivious.

Dog’s eyes are unable to distinguish between different colours as well, hence the reason most people say dogs are colourblind. They see in two colour palettes – blue-violet and yellow. Their rod-dominated retinas also provide them with the ability to see in different shades of grey but that is kind of where it ends.

What will it do to my dog’s vision?

Although there have been studies done on the subject, as well as studies on how watching television can affect a dog’s mental health overall, there hasn’t been enough of a conclusive result to say whether or not watching TV is good (or bad) for a dog’s eyesight.

They do see things in a sharper focus than we do so sometimes, depending on the programming, the television can cause an increase in anxiety for dogs as they try to follow all the moving components on the screen. This is especially true for high-action programmes.

Instead of leaving the television on for your dog while you aren’t at home, why not try a music channel that only features the song information on an otherwise black screen? Or make sure you choose a channel that will feature soft, slow programming to see how your dog reacts to the stimulation.

We’ve just discovered exactly why our dogs love to watch TV with us and it’s actually because they can, depending on the breed, see exactly what we are seeing.

If you are nervous about your dog’s eyesight or they are the type of breed that can strain their eyes trying to follow the moving pictures, then why not give them the stimulus of sound without the images? Keep the radio playing while you are not at home to give them something to listen to.

If you are going to let your dog watch the telly with you, then why not take the time they are invested in their programme to complete some maintenance on them (just make sure you are watching a soothing programme or even a musical concert)? They will be engrossed in the TV and that stimulus, combined with grooming, can help relax them. Trim their nails, brush their coats, and just enjoy the bonding time you are experiencing with your favourite ball of fur.

Tammi Avallone grew up in the countryside on her parents’ farm where animals, including dogs, always surrounded her. Tammi is the Managing Editor of FiveBarks.com.

Get pet essentials at discounted prices with Lazada Promo Code

5 things you do that your dog can't stand 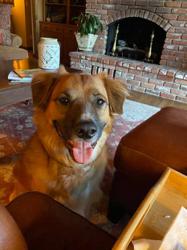