Studies have shown that dogs will establish eye contact to beg for food from humans. — 123rf.com

All dogs have a talent for begging, and as one might expect from a Malaysian dog, Benji – Molly Ooi’s mixed poodle rescue – had a passion for durian.

“Benji was crazy about durian. He’d smell it from upstairs, and come running down for his share, ” Ooi shares. “The dog knew I disapproved of his begging but he did it anyway. He’d look at me sideways, and then look at my husband with puppy eyes.

“He 'begged' with huge round eyes and my husband would not be able to stand it; he’d give in every time. Benji always got his share – and he got it first, too!"

While durian-eating dogs are possibly special to Malaysia, all pet lovers have been subjected to a begging dog. But what exactly this behaviour is about is hotly debated. Thankfully, begging has been the focus of many animal behaviour studies.

All puppies start off blind, drinking milk from their mums. When they start toddling about, they yip for attention and jostle one another at feeding time.

By the time they are a bit older, and their mums are weaning them, pups will naturally turn to begging. Typically, they act like younger dogs: they yip like a tiny pup, look small and vulnerable, and act as if they’re starving. Frequently, mum gives in!

While it’s uncertain if tiny pups beg instinctively or whether they learn it from social cues is fodder for debate, but undoubtedly, pups are masters at it before they are fully weaned.

In addition, we breed pets for puppy-like traits, such as bigger eyes and ears. We also tend to reward dogs for acting like pups. Just think: when a big hulking Doberman hunches down and makes his best puppy yip, nearby humans will melt into “Squeeeees”, and offer cuddles and treats to the “good doggy”.

But begging can be more complex than acting the puppy. As Ooi noted, Benji would look at her, decide she was not a soft touch, and would fix his mournful look on her husband and give him the business.

Anyone who has been given puppy eyes knows how devastating a tactic this is. The dog stares, looking soulful and somehow you feel like an absolute rat for eating when there is that good boy sitting there, literally starving the death on the spot.

But is it our imagination? Are dogs just walking up to any person and begging at random? Or do dogs look us in the eye in order to assess if we’re going to offer a share of our food? If so, it means they have a theory of mind, the ability to attribute mental states like emotions to others and themselves.

In 2004, scientists at the University of Hungary investigated the issue. They took 19 dogs and presented them with two humans, each with a sandwich. At first, they both fed the dogs a bit, so the dogs knew the humans were a soft touch. Afterwards, both humans sat in chairs but one either sat with their back to the dogs or wore a blindfold.

When the dogs went for the person they could establish eye contact with, the scientists concluded that dogs use eye contact to figure out whether we are attentive or not.

But it brought up another question: have dogs lived with us so long that they have evolved to understand how we humans think? Is it a genetic trait that dogs only beg from people who are paying attention to them?

In 2011, scientists from the University of Florida in the United States and Kyung Hee University in South Korea set out to discover the answer. They noted that it is a genetic trait, then other animals should not behave the same way.

Their study "Can your dog read your mind?" co-opted a small group of tame wolves, pet dogs and shelter dogs. Like the other study, the humans fed all the animals treats so that a connection was established.

Then, the wolves and dogs were taken to a field and shown a human standing 6m away, looking directly at the animal while the other human had her back turned, held a book over her face, had a camera over her eyes, or had a bucket over her head.

When faced with a person looking at them or with their back turned, all pet dogs and wolves went for the eye contact. Pet dogs mostly understood that people with a book over the face, a camera and a bucket would be a problem. However, the wolves were totally confused by the props. As for the shelter dogs, they avoided people who could see them.

After some discussion, researchers considered that the shelter dogs were probably afraid because stray dogs tend to be abused. Therefore, they would see people eating and know they were seen, but they would have learned that asking for food would earn them a kick.

So as the researchers ran another experiment with pet dogs and wolves. Once again they had two humans, one looking at the dog and another wearing the bucket. But this time, only the person with the bucket on their head would share a sandwich.

If the dogs were just learning as they went along, they would quickly learn to approach the bucket wearer. That would prove dogs don’t have an inherited theory of mind at all.

When the study ran, the dogs kept begging from the person they could lock gaze with, even though the bucket wearer was the only one sharing the food.

Although the group was small and the results mixed, that result suggests dogs have a theory of mind. Our pets look us in the eye because they believe we need to be paying attention for begging to work.

Wolves share a bit of this, in that they can work out huge cues like a turned back, but they don’t get that a person reading a book or looking through a camera isn’t paying attention.

To get a really solid answer, a lot more work needs to be done, with much bigger groups of animals.

Until we get to that point, certain things are clear: if you want to keep your durian to yourself, don’t look your pet in the eye. And if you can, turn your back. Good luck!

Dogs will beg, and it’s likely a mix of instinctive behaviour as well as learned behaviour. If it really bugs you, here are some tips to help guide your pet gently away from begging.

1. Feed the dog properly. A hungry dog will beg, so be certain that your pet has two meals a day, and enough calories so it’s not hungry. As everyone loves to snack, provide a good supply of chew bones. The best ones can be eaten slowly over days, providing happy chewing and clean teeth. 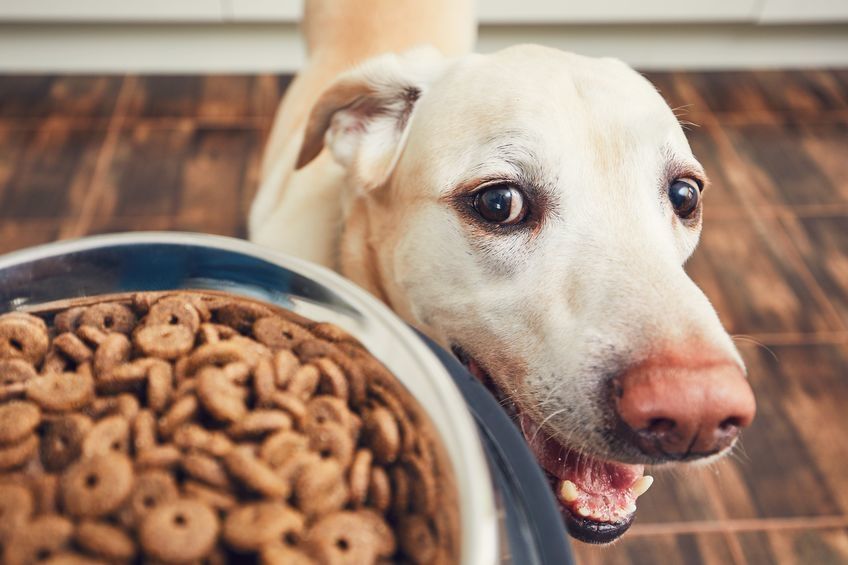 A hungry dog will beg, so ensure your pet has two meals a day, and enough calories so it’s not hungry. Photo: 123rf.com

2. Understand that reward reinforces behaviour. Every time a pet begs and gets food, they learn that begging is good. Also, if you say no-no-no-yes, you are teaching your pet that persistent begging is a great thing.

3. Ignoring the begging 100% of the time is key to success. Yes, it’s hard, but when your dog begs, rub their ears and gently push them away. Don’t yell or get angry; your pet doesn’t get that it’s unwanted behaviour.

4. Be patient. It takes a long time for animals to unlearn and learn behaviour. So don’t expect to say no and have them get it instantly. You’re talking to a pet, not a human being. Be as patient as you would be with a two-year-old child. Gentle education is the way to go.

Terry is 10 months old, spayed, vaccinated and super healthy. This big puppy is very friendly, active and playful. She wants to be a companion dog and a member of the family. Interested adopters, call SPCA Penang (04-281 6559) located at Jalan Jeti Jelutong, Jelutong, 11600 Penang and visit https://spca-penang.net. Please call and make an appointment beforehand.

No coffee, onion or avocado for the dog, please

Ukraine's Odessa wins Unesco status despite Russia opposition
Graves sink and fisheries shrink as a result of climate change in Fiji
Venice of Africa threatened by severe flooding due to climate change
Berlin homeless charity: Needs are soaring but donations are dwindling
This German football fan decorated her whole home in her team's colours
Climate crisis: We must listen to young voices
In rural Cambodia, fried tarantulas are a crispy delicacy
Designers look to nature, landfills for new decor materials
Researchers dig up secrets of 'self-healing' Roman concrete
Rise of 'The Child': Will Malaysia face a turbo-charged El Nino in 2023?